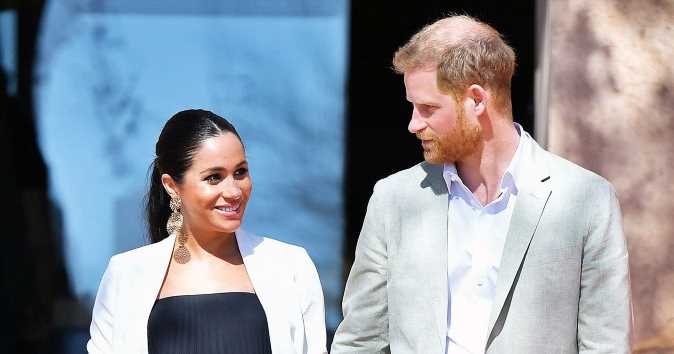 Pregnant Meghan Markle and her husband, Prince Harry, revealed one more surprising detail during their tell-all interview on CBS on Sunday, March 7 — the couple spilled the gender of their second child!

“It’s a girl!” Harry announced as he joined her for the second part of their interview. The British royal admitted it felt “amazing” when he learned the gender: “Just to have a boy and a girl, what more can we ask for? We’ve got our family. We’ve got, you know, the four of us and our two dogs, and it’s great.” The couple added that “two is it” for them and their baby is due in the summer.

The couple announced on Valentine’s Day that they were expecting baby no. 2 after experiencing a devastating miscarriage last July.

“We can confirm that Archie is going to be a big brother,” a spokesperson for the pair confirmed on February 14 as they shared an adorable black-and-white photo of Harry sitting on the grass in a harden while Meghan lay with her head in his lap and rested her hand on her baby bump. “The Duke and Duchess of Sussex are overjoyed to be expecting their second child.”

Meghan wrote that after her changing toddler son Archie’s diaper, “I felt a sharp cramp. I dropped to the floor with him in my arms, humming a lullaby to keep us both calm, the cheerful tune a stark contrast to my sense that something was not right. I knew, as I clutched my firstborn child, that I was losing my second.”

Hours later, as she lay in a hospital bed, Meghan clutched her husband’s hand.

“I felt the clamminess of his palm and kissed his knuckles, wet from both our tears,” she admitted. “Staring at the cold white walls, my eyes glazed over. I tried to imagine how we’d heal.”

But as Meghan revealed her baby bump on Sunday night, she was glowing. “We’re having a baby!” she exclaimed at the start of the two-hour special, explaining that this time around she and Harry knew the sex of the baby.

During her interview, Meghan also talked about the lead-up to Archie’s birth in May 2019, revealing that there were “several conversations” taking place within the palace walls that Harry later related to her.

“In those months when I was pregnant, all around this same time, so we have in tandem the conversation of ‘He won’t be given security. He’s not going to be given a title,’ and also concerns and conversations about how dark his skin might be when he’s born,” Meghan revealed.