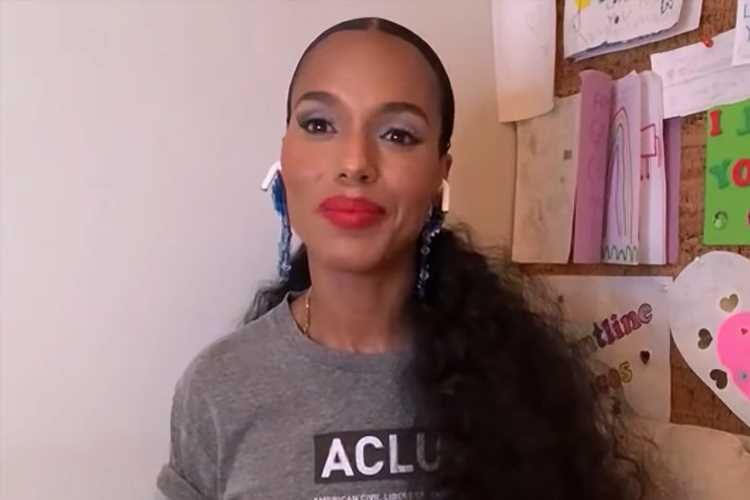 Kerry Washington is educating her kids about the country's true "superheroes."

On Thursday, the 43-year-old actress appeared on Jimmy Kimmel Live! and shared details on how she is educating her children about current politics amid the ongoing 2020 election between President Donald Trump and former Vice President Joe Biden.

"We do talk a lot about it, we talk a lot about the election in my house," Washington— who shares daughter Isabelle Amarachi, 6, and son Caleb Kelechi, 4, with husband Nnamdi Asomugha, 39 —told host Jimmy Kimmel.

Over the last several months, Washington has been extremely involved with the election, joking it was her "second job," as she traveled across the country to encourage people to vote. When her two children began asking questions about these trips, the mother of two made sure to explain the meaning behind the work she was doing.

"What I said to them was, 'We really want to go to these places to help people to know how important their voice is and that they need to vote. Because the reason the person who is in the White House is there now, is because not enough people voted,'" the actress recalled. "And our kids were like, 'Well why didn’t they vote?' And we said, 'They didn’t know how much their voice mattered.'"

"So we do, we try to talk about it in ways that are not scary," Washington added. The Little Fires Everywhere star explained that her passion for civic responsibility started with her own parents, who stressed the importance of voting in their household when Washington was growing up.

"My mom used to take me into the polling booth with her when I was a kid. And it was like, I thought she was OZ, because she went behind these curtains and she would move levers and I was like ‘My mom is magic, she has all this power,'" the star explained.

Then, when she turned 18, her parents took her out to dinner to celebrate her eligibility to vote. "I mean it’s a big deal in my family," Washington said.

Turning to the ongoing election and the wait to see who will take the Oval Office, Washington encouraged everyone to have patience.

"We have to just wait while the votes are counted," she said. "It's really important that we trust our local election officials."

Or as Washington called them earlier, the "superheroes."