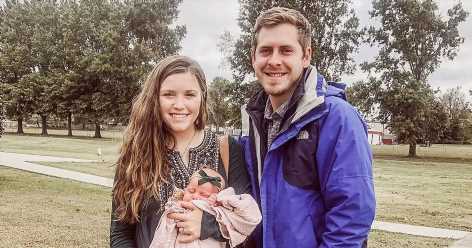 Not so fast! Joy-Anna Duggar fired back at speculation that she’s pregnant with baby No. 3, weeks after giving birth to her second child, daughter Evelyn Mae.

Duggar Family: Meet the Next Generation

The Counting On star, 22, posted a series of photos with her husband, Austin Forsyth, on Saturday, October 24, from a family photo shoot.

“’He just needs a companion.’ Austin’s mom told this to me when we were dating; It’s so true,” she captioned the images. “He just wants to have somebody with him and I love this about him! I’ll be your companion any day, baby.”

While most of the comments pointed out how “beautiful” the couple was, on user wrote, “Oh God she’s not pregnant again…”

The 19 Kids and Counting alum clapped back, writing, “I have a 9-week-old.”

On the same post, another fan called into question why Duggar wasn’t wearing a wedding band on her ring finger. “So, do you just get an engagement ring in this belief? I didn’t see a band with her ring,” the user commented.

Stars Clap Back at Parenting Police

The mother of two again fired back and pointed out that her hands were still puffy after giving birth two months prior.

“No, my fingers were swollen during pregnancy and I haven’t put my wedding band back on,” she replied.

The reality star welcomed her daughter on August 21, after previously suffering a miscarriage.

“To say my heart is full is an understatement,” the couple told Us Weekly in a statement on August 24. “We have been dreaming of this day and are so happy to announce that our baby girl arrived August 21st.”

The statement continued: “She has the best personality, is easy going and loves to be held! She has her nights and days mixed up, but honestly, I love it! Getting to spend that quiet, quality time with her through the night has been SO special!”

The couple revealed the newborn’s name a week later via social media.

“I wanted her name to be perfect and elegant,” Duggar wrote via Instagram at the time. “We had a hard time deciding but after a few days finally settled on ‘Evy Mae’ and we think it fits her perfectly!”

The TLC personalities announced in March that they were expecting their second child. The news came eight months after the pair spoke out about their pregnancy loss.

Duggar and Forsyth, 26, tied the knot in May 2017. They welcomed their son, Gideon, the following year.