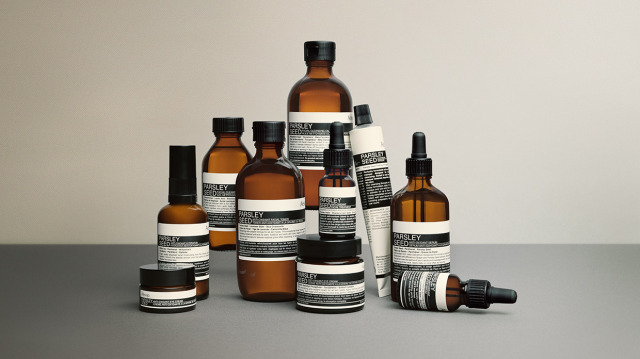 “I’ve been so aware of Aesop’s incredible ethics and products for so long,” Christopher Raeburn, creative director of fashion brand Raeburn, told WWD. “And obviously, as a designer myself, it’s always brilliant to see amazing brands in other parts of the industry doing fantastic things.”

Adam Kakembo, chief marketing officer of Australia-based cosmetics brand Aesop, approached Raeburn about the project after having met him about a decade ago.

“What struck me back then was this duality of very intelligent, considered, innovative design coupled with a desire to do the right thing in terms of the planet and environment,” said Kakembo. “Fast-forward to COVID-19 times, and we started as a business looking at what would customers’ expectations be of us in a post-COVID-19 world. The thoughts really took us to contacting Christopher. In that initial conversation there was a real connection in terms of his thinking, and circularity, environment and design being important.”

“The great thing was that we realized very quickly when speaking with Adam how much alignment there was between the work we’ve been doing with Raeburn and the fantastic innovations that Aesop are working on,” the designer, known for his reworking of surplus fabrics and garments, agreed.

The co-creation between the Aesop and Raeburn teams has been totally virtual.

“It’s quite incredible that now we are able to bring together craft, creativity and community but under pretty challenging circumstances,” said Raeburn. “COVID-19 has not stopped us. If anything, it’s pushed us forward, made us more creative. I think you’ll see that in the outcome of the project.

“What we have been working on — without giving away too much — is something that really brings together the values of Raeburn…but then also really importantly, it takes in the reality of the world that we live in today,” he continued. “It’s really thinking about the post-COVID-19 needs for customers and providing all the products that could really be a benefit to them going forward.”

Protection and care were identified. Now there’s a suite of products spanning from exclusive to democratic being worked on that’s bridged by what Kakembo calls “an aspirational piece.”

The first drop will take place in January, with more to follow.

Raeburn said his brand’s customers are quite “forensic,” explaining they want “to know everything about materials, narratives, and I think that’s something that really is shared with Aesop, as well.”

Raeburn has never worked on a beauty-related project before, and for Aesop, it’s a first co-creation collaboration with a fashion designer.

Since its founding, Aesop has been careful about its impact on the environment and the communities it does business in. But now it is being more vocal about its sustainable initiatives.

Those include aiming to obtain B Corp certification, for social and environmental performance, before the end of this year, and to have all its packaging being reusable, recyclable or compostable by 2025.

On Sept. 28, Aesop will launch a pilot in one of its boutiques in Adelaide, Australia, involving the return of used 200-ml. glass bottles, which will be cleaned, sanitized and refilled. The idea is to scale that program so that there will be a refill or closed-loop solution for half of Aesop’s packaging line by 2030.

Raeburn said he’s very excited about the tie-in with the brand.

“The best thing, of course, with any true partnership is that you’re really pushing one another into spaces you wouldn’t be normally,” he continued. “Then you’re learning from each other.

“It’s been a really good blend of the voices coming together,” said Raeburn.