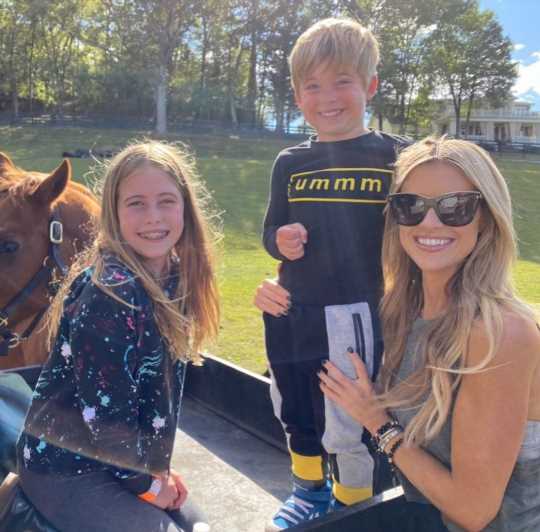 Christina Anstead is setting the record straight about how things might look on her social media versus how they actually are in real life.

The Flip or Flop star addressed critics on Instagram Wednesday night, writing in the caption of a mirror selfie that it has been an "incredibly isolating" year for her, and seeing comments like "you must be an absent mother because you are not with your kids" is not acceptable.

"Smh wake up people. I hardly post anymore … and I def do not want to post my kids every freaking day to make it a contest of who's a better parent 🤦🏼‍♀️ f that," said Christina, 37. "This doesn't mean I'm not with my kids — it means the opposite — I am with them — I'm present."

"Stop parent shaming people, stop choosing sides when there is no side to choose. My point being — when you see stuff on here take it all with a grain of salt," Christina added. "There is a whole lot of Filters and fake smiles. I've been guilty of faking it too. We are all struggling — some of us are just better at 'masking' it."

Christina and Tarek (with whom she hosts Flip or Flop, which is set to return for a 10th season in 2021) separated publicly in December 2016 and finalized their divorce in January 2018.

The mother of three announced her split from Ant, 41, in September. The pair began dating in October 2017 and married at their home in Newport Beach, California, in December 2018.

Ant — who's also dad to son Archie, 14, and daughter Amelie, 17 — spoke out about the split for the first time on September 26 with an Instagram post.

"Anyone who really knows me knows that I don't like to share private matters publicly," he captioned a black-and-white selfie of him and Christina. "I have remained silent while holding on to hope. I never gave up on us. I pray Christina's decision brings her happiness."

Last month, Christina enjoyed a vacation in Tennessee with Brayden and Taylor in the wake of her split from their former Wheelers Dealers star stepfather.

"Smooth As Tennessee Whiskey 🍁," she captioned a gallery of photos showing her and the kids horseback riding, visiting a farm, making s’mores and enjoying a sunset, quoting the song by Chris Stapleton.

The Christina on the Coast star's son Hudson spent the weekend with dad Ant. The British TV host posted some photos to Instagram of their father-son time, including a shot of the pair eating "Fish & Chips by the sea."

He also shared an adorable video of Hudson smiling up at him, captioning it, "Unconditional."