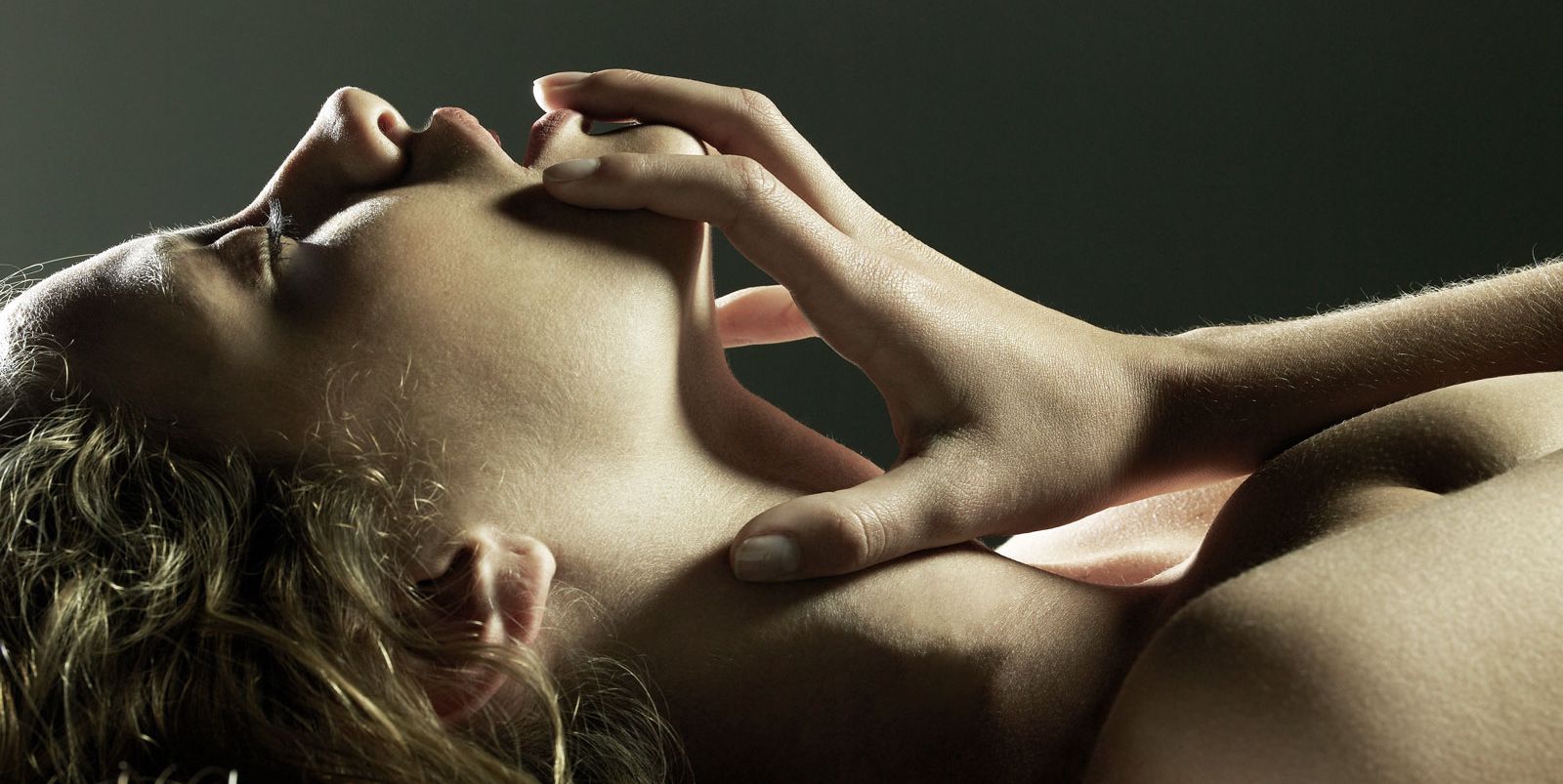 Sex can be romantic. Animalistic. Should be pleasurable. Egalitarian. Messy, but in a good way. Fun. Often, it’s straight-up confusing. When it comes to a guy’s climax, the routine is fairly simple: You get a little turned on, there’s some touching or rubbing or partnered stimulation of some kind, and then when you’ve reached the point of no return—a release!

But women’s orgasms can be as confounding as a Westworld plotline. First we have to feel generally comfortable around you, then remember whether or not we left our curling iron plugged in this morning, reassure ourselves that we unplugged it, then remind ourselves that we’re making out with a guy we really like. The blood eventually rushes to our genitals, and the touching from then on has to be juuuuust right—not too hard, not too soft, and usually on the exact right spot. Things are going well! We’re feeling it! And even then, sometimes when an orgasm is ascending like a firework—poof!—it turns out it was just a dud.

So it’s not exactly shocking to read new research in The Journal of Sexual Medicine that says that men have a difficult time telling when (or even if) women climax during a sexual experience. In the study, which looked at a nationally representative sample of nearly 1,700 newlyweds, researchers found that 43 percent of husbands misperceived how often their wives orgasm, in most cases overestimating their wives’ O’s. Remember, these weren’t random hookups but people who put rings on it and, barring any 90 Day Fiancé–type situations, had had a few years or so to explore each other’s bodies.

“The general lack of men’s awareness was surprising,” says Nathan Leonhardt, a Ph.D. candidate at the University of Toronto and lead author of the study. “We were expecting some [gap in awareness], but such a high percentage tells us this is a very prevalent issue.”

Why the Confusion—and Why It Matters

If you look around, you’ll start to see similar data in other less, um, scientific places. A recent survey of 1,000 men by sex-toy start-up Cunni—they make an oral-sex simulator, obviously—asked if men gave their partners orgasms during oral sex. Fifty-seven percent of men answered yes. But when asked if they knew what their partners liked during oral sex, 59 percent of guys said they didn’t. And then 67 percent said they sometimes weren’t even sure what they were doing during oral sex.

Maybe it’s true that all those men really did give women orgasms. But they also could use a lesson in what women actually want in bed—even if they don’t think they need it. Another recent survey found that 42 percent of men gave themselves an A rating in bed. Nice, guys.

So what’s really going on here? Why the disparity between what men think is happening and. . . reality? (Before you go there, yes, faking happens, but you can’t fake it forever.) Not all men are clueless around a vagina. But that’s not to say some of y’all couldn’t use a refresher.

Understanding the female orgasm takes some practice, but it’s important to school yourself on your partner’s pleasure, says sex therapist Ian Kerner, Ph.D., the man who literally wrote the book on it, 2004’s She Comes First. “In my practice, there are a lot of orgasm gaps and imbalances,” Kerner says. “And I can tell you that if any partner is not consistently enjoying sex and orgasm, it can have a big negative impact on a relationship.”

Of course, most guys in a committed relationship want to please their partner during sex. “In the vast majority of
cases, a husband wants his wife to be pleased with the sexual experience and wants her to have an orgasm,” Leonhardt says. “Sometimes men just need to
have the courage to bring up the subject, talk it through, and be willing to adjust the things that they’re doing to make sure she’s having a good experience as well.”

Because how a female gets to orgasm can be as complicated as trying to understand blockchain (seriously, what is it?), we asked real ladies and experts to tell us what women want more of in bed—and why it matters that you get it right.

First things first: Women definitely want to orgasm, probably just as much as you do. “There’s a big, culturally propagated misunderstanding women don’t care as much about having orgasms during sex as men,” says Kerner. “And that does an injustice to women.” In fact, in Leonhardt’s study, a wife’s sexual satisfaction was directly linked to the frequency of her orgasms. The more often she orgasmed, the more content she
was sexually.

But there’s more to good sex than a bed-breaking climax. As tempting as it is to rush to P-in-the-V action as the clothes are still hitting the floor, spending some time to warm up her nether regions is worth it. Most women, up to 77 percent in some research, say foreplay is necessary for a good orgasm. “The best kinds of sexual experiences I’ve had are when it isn’t all about the sex,” says Zoe, 21. “So often I feel men are in it just for the act of penetrating and finishing, meaning they skip the foreplay, and as soon as they finish, it’s over. Chances are if you finished, she hasn’t yet.”

According to Kerner, most women need at least 15 to 20 minutes of pre-penetrative acts (kissing, touching, and sexy talk) to get aroused. “I think the mistake that a lot of men make is thinking, ‘Oh, we got into bed, we got undressed, I kissed her for 30 seconds, and now I’m going down on her for two minutes, and then I’m going to insert my penis,’ ” Kerner says. “There’s a whole Act I that’s missing.” Female arousal takes time, but it’s worth the wait.

When it comes to oral, do it. “It’s refreshing when men go down on women,” says Elizabeth, 21. “And it’s better if it’s not a tit-for-tat exchange but an unexpected move, without the assumption of ‘returning the favor.’ ” Once you’re down there, women want you to be mindful of your technique, too. “There’s a difference between a poking tongue and a flat tongue,” says Grace, 32. For the record, she’s a flat-tongue fan—it creates a
softer touch.

The Moves That Get Her There

Suggestions from individual women are subjective, of course, but they aren’t just anecdotal. There’s serious data to back up what kinds of touches are most likely to make women orgasm. Unsurprisingly, most techniques involve the clitoris, that nerve-packed area at the top of where her labia meet. It’s about the size of an eraser head and packed with thousands of nerve endings—similar to the amount in a penis.

Last year, the Kinsey Institute partnered with OMGYes, a research-based website that educates users on female pleasure, in a groundbreaking study that found exactly what kind of clitoral action gets women to climax. Of the 1,055-strong sample, 37 percent of women said they needed clitoral stimulation to orgasm during intercourse, while another 36 percent said it isn’t necessary but that it enhances the whole experience.

The researchers went even deeper and asked what kind of clitoral touching women liked most, and two thirds of respondents said they enjoyed direct clitoral touching. When asked about the shape and style of touching, women responded that they like, in this order: up and down motions, circular, side to side, pulsating (rapid pushing in one spot), pressing, then flicking. For patterns of touch, nearly all women in the study said they preferred repeated, rhythmic motions. An almost equal number said they liked circular motions around the clitoris.

May your fingers and tongue never get lost again.

How to Talk About It—with Confidence

Foreplay can be a great way to get the conversation started, says Kerner. “Arousal actually releases a neurochemical cocktail that disinhibits you a little bit, so use that time as an opportunity
to begin communication,” he suggests. As a pre-sex makeout sesh begins, start to describe a fantasy of yours, then ask her hers. Or describe the parts of her body you love the most—and then kiss her there.

If you can’t tell if she’s feeling it, stop for a second and take stock by asking
her, “Does that feel good?” If the answer is no, redirect. And don’t worry about it messing with the flow, which can be resumed. “Being attentive is hot,” Elizabeth says. “It shows you’re into me and into having a great time.” Plus, Kerner says, the way you communicate early on in a sex session (and in a relationship) paves the way for future talks. And much less confusion.

How to please her during every moment

Early in the game, spend time caressing and kissing her less obvious erogenous zones: the insides of the wrists, behind the knees, the earlobes. Soft touches in unexpected areas create hot intrigue—and give you the chance to check in with her along the way.

Most women need clitoral stimulation to orgasm—it’s science! When you’re doing
it doggy, slip a finger between her legs and move it from side to side, like a windshield wiper. Giving her C-spot some attention is an almost guaranteed way to make sure she’s satisfied.

Some experts say that “afterplay,” the time you spend cuddling and recapping a job well done, is as important as the deed itself because it strengthens your bond. Spend time in
each other’s arms after you’ve both orgasmed—after you’re done high-fiving.