Last night’s slog of a Bachelorette episode was bad for many reasons—among them, the fact that the second hour included a recap of the first hour we’d just watched. (WTF, Chris Harrison?!) But the worst part, without a doubt, was Luke P. filling his diaper in a list-ditch effort to prove that he has an adequate number of emotions to be a capital-H Husband.

At the conclusion of what Hannah Brown called the worst one-on-one date she’d ever been on, the Bachelorette star declined to give Luke P. a rose. In addition to being the most-hated guy in the house and definitely tackling another contestant for no reason during a rugby match, Luke was robotic and incapable of talking about emotions in any meaningful way.

After Hannah sent him packing, Luke sulked through the woods like a Sasquatch in a suit…only to turn around, march back to her, and adamantly refuse to leave. He wanted to fight for the relationship—he wanted to move mountains, he said, flailing his arms and talking in a not-indoor voice. He was Marlon Brando screaming “STELLAAAAA!” in A Streetcar Named Desire, more or less. To the collective horror of many viewers—not to mention Hannah’s 47 boyfriends back at the house—Luke “fought” his way back onto the show.

Luke seemed to think his persistence was the very HEIGHT of romance, but we can assure you: It wasn’t. Instead, it perpetuated the idea that refusing to accept rejection is appealing—that it’s what a man with any shred of self-respect is supposed to do.

From Streetcar to The Notebook, from the (let’s call him what he really is: creepy) dude with the poster boards trying win over Kiera Knightley in Love Actually to sad, stalker-y John Cusack wielding a boombox in Say Anything, we’ve been trained to believe that real men—desirable men—refuse to accept no for an answer. But that couldn’t be further from the truth. When a woman says no, guys need to listen. Resisting rejection isn’t romantic. It’s scary. It makes women fear for their safety if they don’t grant the man victory.

And yet, ABC champions this narrative. In fact, a man “fighting for” a woman is one of the Bachelor franchise’s most reliable tropes. On the most recent season of The Bachelor, Colton Underwood leaped over a fence in anguish when Cassie Randolph, one of the three final women vying for his heart, expressed that she wasn’t ready to take the next step. (Aside from Colton’s virginity, the so-called “fence jump” was the most heavily advertised element of the season.) One of the reasons for Cassie’s rejection is that her father refused to give Colton his blessing—another regressive tradition that often comes up on The Bachelor. But whatever Cassie’s reasoning, she told Colton “no,” and he decided that meant “maybe.”

Did Colton say, “I hear you and I love you so much that I’m going to respect your decision to go home?” No. Instead, he said, “You’re over-thinking everything. Every relationship moves at a different pace … It’s okay to take your time.” 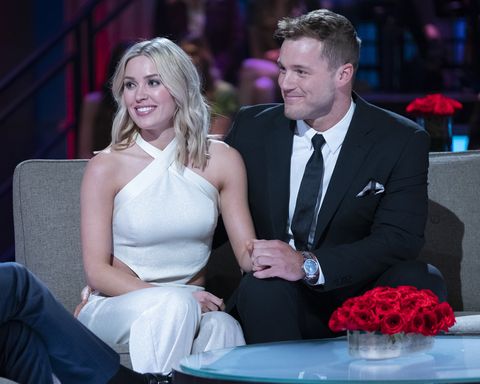 Cassie decided to leave anyway. As she walked away, Colton made clear that he wasn’t ready to back down: “I’m not gonna stop fighting for you.” He proceeded to break up with his remaining two girlfriends, then expertly guilt Cassie into getting back together with him. (The couple is still together. Cute!)

But back to this season of The Bachelorette. The best-case scenario is that Luke’s big tantrum tees up a moment of empowerment for Hannah when she ultimately kicks him to the curb.

Granted, maybe we’re holding The Bachelorette to unfair standards. It is, after all, a show about 30 men with competing to “win” one bride. How woke can we expect it to be—especially when juicy drama is on the line? Still, the reality show has impressively handled sensitive issues like sexual assault, and in 2019—with millions of viewers tuning in to watch—it should hold itself to a higher standard.