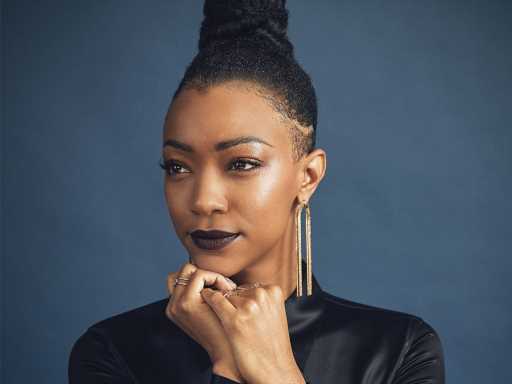 Sonequa Martin-Green wants to send girls to space. The actress, known for her memorable turns as Cmdr. Michael Burnham in Star Trek and as The Walking Dead‘s Sasha Williams, has teamed up with Frito-Lay and STEM Next’s Million Girls Moonshot in an effort to provide one million girls with STEM learning opportunities by 2025.

The program, dubbed Back-to-School Blast Off, is all about inspiring girls to follow their dreams and pursue a career in a field sorely lacking in female representation. We spoke to Martin-Green about this immersive new space experience, the women who inspired her the most growing up and — of course! — her favorite back-to-school tips and tricks.

SheKnows: What got you excited about inspiring young girls to pursue a career path in STEM?

Sonequa Martin-Green: I love the idea that girls who wouldn’t normally get the opportunity to have an experience like this were able to have an experience like this. I really appreciate the work that Million Girls Moonshot is doing. Their mission statement is really powerful. They say, “Let’s reimagine who can engineer, who can build, who can make, let’s reimagine the future.”

These girls were chosen from all over the country, ages 12 to 18. They are interested in careers in STEM, some of them even want to be astronauts. They get to go to NASA and have this immersive experience where they experience zero gravity, they get to talk to real astronauts and hear about what it’s really like.

I hope it’s something they can take with them, and be encouraged to pursue careers in STEM, because there’s a dearth of representation of women and people of color, and especially  women of color in STEM.

SK: You mention representation and it makes me think of you being the first Black woman to be a Star Trek captain. Have there been any moments with young female fans that really stayed with you?

SMG: When people tell me that they have decided to go to grad school in STEM, that they feel like they represent themselves better in the workplace, that they feel more confident in their voices or they finally left that job to go to that dream job — I hear these stories and they always make me emotional. It’s really powerful and I’m really grateful and humbled by it.

SK: That’s so moving. Growing up, who was the woman you watched on screen who you felt represented you?

SMG: Oh, man, well first off, Nichelle (Nichols, best known for her role as Lt. Uhura in Star Trek and its film sequels). Also, Whoopi Goldberg, Angela Bassett, Halle Berry, Eartha Kitt. I would say those are the ones that made the most impact on me growing up.

I’m so inspired by [those] women, and especially by Nichelle. I mean, we wouldn’t be doing an initiative like this — there wouldn’t be Million Girls Moonshot, there wouldn’t be the NASA Space Camp experience for these girls, if it wasn’t for the work that she did in the 70s with her company Women in Motion and her affiliation with NASA, and her serving on the Board of Governors for the National Space Society. We wouldn’t be here today right now in this interview talking about what we’re talking about if it weren’t for her.

SK: This is a back-to-school initiative from Frito-Lay and I’m curious if you have any tricks or tips as a parent about tackling the whole daunting back-to-school process?

SMG: I’m a mother of two, my son is seven and my daughter just turned two. I think for my son, it’s about hyping him up for the new school year and getting him excited for what he’s going to learn and how he’s going to grow and change.

SK: When it comes to school lunch, what’s would you say has been your biggest fail?

SMG: Most of the time when I put carrots in there, he won’t eat them. Or sometimes it’ll be strawberries in there, and he won’t eat them. (laughs) I just gotta keep putting them in there. You know, maybe I need to add hummus or a little piece of dark chocolate. Maybe that’s the key! You put veggies in there and tell them that they can’t have the dark chocolate unless they have the veggies.

This interview has been edited and condensed for clarity and length.

These history-making Black moms were (and are!) paving the way for women everywhere.