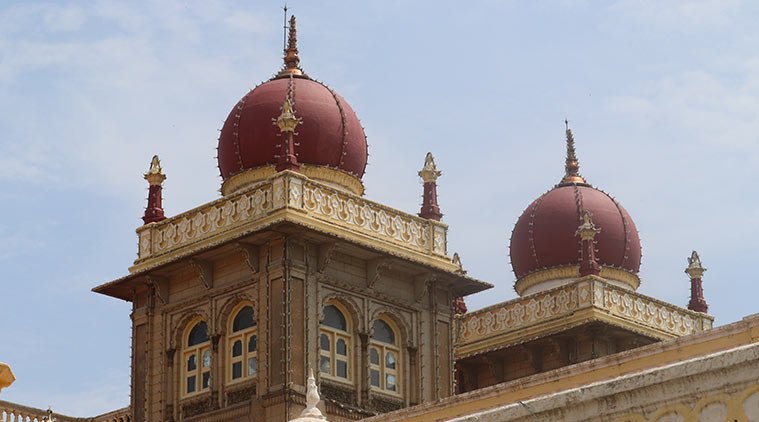 The city of Mysuru got its name from the slaying of the mythical demon Mahishasura by Durga’s incarnation, Chamundeshwari Devi. Numerous secret tunnels are said to exist in the palace cellar, leading to Srirangapatnam (Tipu Sultan’s summer palace) and other palaces. 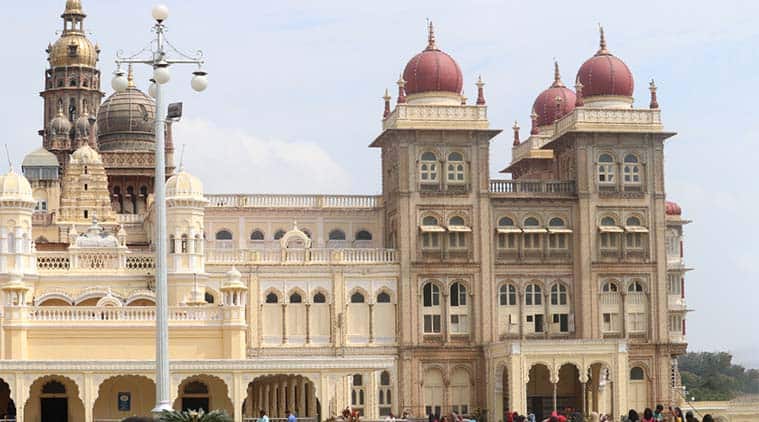 In the eighth edition of this series on Indian monuments by Sahapedia, we look at the magnificent Mysore Palace. Built and renovated over five centuries, the official abode of the Wadiyar dynasty of the erstwhile kingdom of Mysore is one of the grandest and most popular public attractions in India.

If there is one palace that stands out for its beauty and splendour in this heritage city of palaces, silk and sandalwood in Karnataka, it is the Amba Vilas Palace. Popularly known as Mysore Palace, it has often been compared to England’s Buckingham Palace in terms of its expanse and grandeur. Facing the Chamundi Hills, home of Goddess Chamundeshwari (the presiding deity of the Wadiyar dynasty that ruled the erstwhile kingdom of Mysore from 1399 to 1950), Mysore Palace is a treasure trove of historical artefacts and draws about 3.5 lakh visitors annually (according to 2014 reports). The best time to visit is during the annual Dasara (Dussehra) festival as well as on Sundays and national holidays, when the palace is illuminated by 97,000-odd lights!

Many Rulers, Many Builders

Built in parts over five centuries — with the final set of changes as late as the 1940s — Mysore Palace is a classic product of the evolving history of the erstwhile kingdom of Mysore, that once included not only Karnataka but also parts of modern-day Tamil Nadu and Kerala. Its fortunes, too, have been closely linked to its key rulers, the Wadiyars. Yaduraya, the first Wadiyar king, started building the palace (then fort) in the 14th century. It was a small affair as Mysore was then a vassal state of the Vijayanagara Empire. Yaduraya took on the name ‘Wodeyar’ (meaning ruler), which metamorphosed to ‘Wadiyar’ after the state came under British rule in the early 19th century. Chamaraja Wodeyar IV finished constructing this ‘fort’ in CE 1574. According to Shrimanmaharaja’s Vamshaavali (history of the Mysore royal family), the palace was destroyed by lightning and reconstructed by Kanthirava Narasaraja Wodeyar (r. CE 1638–59).

By then, Mysore had not only become an independent state, but was one of the largest and most industrialised, with a modern, liberal and cultural society. Problems still plagued the palace as it was remodeled by Tipu Sultan in 1797, who destroyed areas within the palace walls to make room for his new capital, Nazarabad. However, the temples in the complex were left untouched. New structures were built, and Mysore Palace became the city of Nazarabad. But this didn’t last long either.

It was another freak accident that led to the construction of a modern palace. After Tipu’s defeat and death in May 1799 at the hands of the British, Krishnaraja Wadiyar III was installed as the head of the much-diminished princely state of Mysore. His first task was to ‘resurrect’ the palace. But in 1897, the hastily built wooden palace was destroyed by fire during the wedding of Princess Jayalakshammani. The queen regent assigned the task of building the new palace to the well-known British architect, Henry Irwin. The reconstruction cost close to Rs 42 lakh (at the time) and was completed in 1912. Jayachamarajendra Wadiyar, the 25th and final king of Mysore, expanded its limits again in 1940.

This rebuild, which is how it stands now, was designed in the Indo-Saracenic style, with dark pink domes, turrets, arches and colonnades—and, thankfully, using stone and marble. Due to the numerous renovations, the three-storeyed structure of grey granite is now a blend of Islamic, Gothic and Rajput styles of architecture. It also includes a 145 ft-high, five-storey tower with a gold-plated dome, two durbar halls, and the royal family’s living quarters. Embellished mahogany gates, several courtyards and picturesque, geometrically laid-out gardens add to its beauty. An exquisite sculpture of Gajalakshmi, the goddess of wealth and prosperity, tops the central arch. The Wadiyars were great patrons of the arts, especially literature and fine arts, and some of the state’s finest craftspersons worked on the palace. 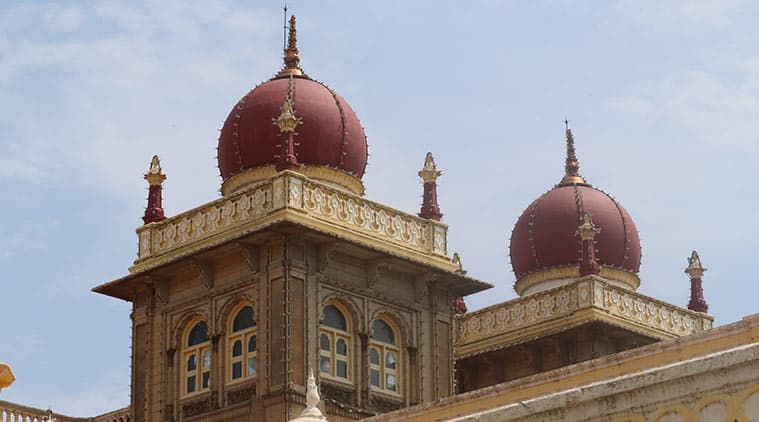 The Durbar Hall, with its ornate ceiling and sculpted pillars, is a sight to behold, as is the peacock-themed kalyanamantapa (marriage pavilion) embellished with stained-glass windows and floral mandalas, and the beautiful paintings that adorn the palace. There is also a museum within the premises that regularly draws thousands of visitors.

Although Tipu Sultan never lived in the palace, his sword is one of the main attractions of the museum, as are paintings by Raja Ravi Verma. Solid-silver doors, the jewel-encrusted royal throne (chinnada simhasana, said to have once belonged to the Pandavas), a wooden elephant howdah decorated with 84 kgs of gold, royal dresses and weapons as well as several canons and chandeliers from Czechoslovakia are among the other attractions. The dolls’ pavilion at the entry has a wide collection from the early 19th and 20th centuries.

The complex also houses 12 Hindu temples, including the Someshvara, Lakshmiramana and Shwetha Varahaswamy temples, built during the14th–20th centuries. Another interesting temple is that of Alamelamma, wife of King Tirumalaraja (r. CE 1578–1617) of the Vijayanagar Empire. After the death of her husband, Alamelamma kept on wearing her jewels and, when asked to return them to the Wadiyars, she refused. Alamelamma is said to have jumped into the river to save her jewellery, and cursed the Wadiyars with the inability to produce natural heirs.

A gold statue was erected in her honour in 1612, and worshipped. However, since then, for 400 years, only adopted male heirs have been able to become rulers of Mysore.

Celebrations for the Masses

Mysore Palace has always been the epicentre of the city’s most important annual event, the10-day Dasara celebrations. This Vijayanagari tradition has continued since the 15th century. Processions are taken out with the royal sword and the idol of Chamundeshwari on a gold seat weighing 750 kg. The royal family presides over the rituals, and important artefacts from the Mysore Palace museum are displayed to the public. The palace is lit up with nearly one lakh bulbs. The festival not only lifts the people’s spirits, but also provides much-needed help and patronage to artists. While Mysuru remains the cultural capital of Karnataka, the palace is undeniably the focal point.

(The article is a part of the extensive coverage of India’s monuments and Saha Sutra by http://www.sahapedia.org, an open online resource on the arts, cultures and heritage of India. Sahapedia offers encyclopedic content on India’s vast and diverse heritage in multimedia format, authored by scholars and curated by experts – to creatively engage with culture and history to reveal connections for a wide public using digital media.)