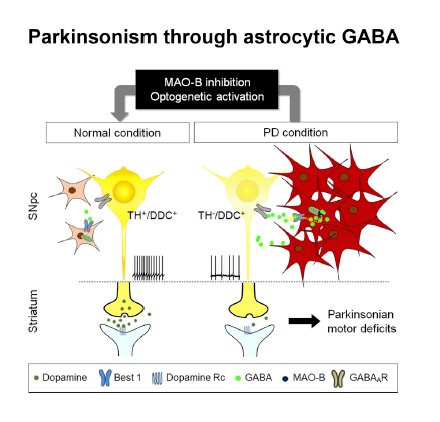 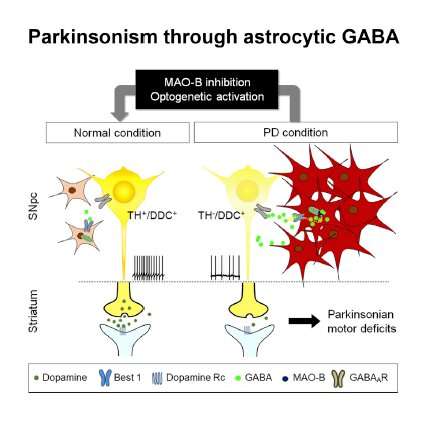 As many as seven to 10 million people in the world are thought to live with Parkinson’s disease (PD). Being the second most common neurodegenerative disease, PD severely affects patients’ quality of life, not just brining movement abnormalities. Despite its prevalence and negative impact, current medical treatments for PD rely on alleviating PD symptoms with little efforts to explore ways to reverse the symptoms.

It is firmly believed that abnormal movements of PD begin in the brain where the production of dopamine, a neurotransmitter for movement control, is irreversibly impaired, i.e. in a state of neuronal death. Currently, L-DOPA, a potent PD medication is mainly prescribed to replenish dopamine in the deprived brain. However, such a treatment is symptomatic therapy, rather than a disease-modifying therapy. Long-term use of L-DOPA is well-known to cause serious side effects such as involuntary, erratic, and writhing movements.

Led by Dr. C. Justin Lee along with Dr. Hoon Ryu and Dr. Sang Ryong Jeon, researchers at the Center for Cognition and Sociality within the Institute for Basic Science (IBS), Korea Institute of Science and Technology (KIST), and Asan Medical Center (AMC) have discovered a new mechanism for PD pathology. The researchers reported that the symptoms of PD begin when dopaminergic neurons are “non-functional,” even before they die off. Though the neuronal death had been until now believed to be the obvious cause of PD, the study found that the movement abnormalities of PD begin in the earlier stage when dopaminergic neurons, though being alive, cannot synthesize dopamine (in a dormant state).

“Everyone has been so trapped in the conventional idea of the neuronal death as the single cause of PD. That hampers efforts to investigate roles of other neuronal activities, such as surrounding astrocytes,” said Dr. C. Justin Lee, the corresponding author of the study. Lee adds, “The neuronal death ruled out any possibility to reverse PD. Since dormant neurons can be awakened to resume their production capability, this finding will allow us to give PD patients hope to live a new life without PD.”

The researchers observed when the number of astrocytes abnormally increases due to the destruction of nearby neurons, GABA, an inhibitory neurotransmitter is released in the brains of both animal PD models and human patients in an excessive amount. This excessive output of GABA suppresses dopaminergic neurons, putting the production of dopamine on a hold. Notably, they confirmed that the dormant dopaminergic neurons are alive with the existence of DOPA decarboxylase. Furthermore, they revealed that these neurons could be awakened by treatment with MAO-B inhibitors, which block astrocytic GABA synthesis. The awakening of dormant dopaminergic neurons leads to a significant alleviation of PD motor symptoms.

The researchers also used optogenetic tools to inhibit dopaminergic neurons of normal rats, inducing Parkinsonian motor deficits. They also demonstrated that activating the dormant dopaminergic neurons by optogenetic treatment can alleviate PD motor symptoms. “This research refutes the common belief that there is no disease-modifying treatment for PD due to its basis on neuronal cell death,” said Dr. Hoon Ryu of Brain Science Institute at KIST. “The significance of this study lies in its potential as the new form of treatment for patients in early stages of PD.”

Dr. Sang Ryong Jeon of AMC explained, “So far, it had been firmly believed that idiopathic PD is caused by the death of dopaminergic neurons in substantia nigra. However, this research demonstrates that functional inhibition of dopaminergic neurons by surrounding astrocytes is the core cause of PD. It should be a drastic turning point in understanding and treating PD, and possibly other neurodegenerative disease as well.”