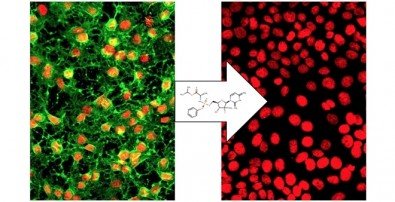 A study performed at the University of São Paulo’s Biomedical Science Institute (ICB-USP) in Brazil shows that sofosbuvir, a drug used to treat chronic hepatitis C, is capable of eliminating chikungunya virus and yellow fever virus. “Human cells infected by chikungunya virus were treated with sofosbuvir, and the drug eliminated the virus without damaging any cells. The drug proved to be 11 times more effective against the virus than against cells,” said Rafaela Milan Bonotto, a co-author of the study.

The study was conducted as part of Bonotto’s Ph.D. research with a scholarship from São Paulo Research Foundation—FAPESP and supervision by Professor Lucio Freitas-Junior. An article on the study, authored by Bonotto, Freitas-Junior and collaborators, can be found on the open platform F1000 Research. An article on the group’s research relating to yellow fever will be published shortly.

The discovery is highly significant for public health, as a chikungunya epidemic has been forecast for the coming two years in Brazil. “Drug development is extremely costly and time-consuming. The process takes 12 years on average between the start of research and bringing the drug to market. The cost is on the order of U.S. $1.5 billion or more,” Freitas-Junior said. “Sofosbuvir has been fully approved for human use. This means it can be readied for use against chikungunya in one to three years, for a much lower cost, estimated at approximately US$500,000.”

He noted that chikungunya is a severe disease not only owing to the acute episode itself—causing symptoms similar to those of dengue—but because it can cause complications that include highly debilitating joint pain lasting months or years. Patients may become incapacitated, unable to work and even bedridden.

“So far, we have no vaccine, and our diagnostic tools need to be optimized,” he continued. “Sofosbuvir is something concrete that could become a powerful weapon against this virus. The results of our research could enable any interested institutions to begin clinical trials.”

Bonotto said, “We don’t yet know exactly how the drug works in molecular terms. What we discovered was the macroscopic result: elimination of the virus and preservation of cells. The drug has proven effective in treating hepatitis C because it inhibits the protein that synthesizes the viral genome. The same may happen in the case of chikungunya, but the action mechanism must be elucidated.”

The study supported by FAPESP was conducted on the Phenotypic Screening Platform (PSP), a new initiative of ICB-USP’s Microbiology Department. Phenotypic screening assays have been successfully used to discover drugs with new action mechanisms.

The PSP has a portfolio of over 15 different types of phenotypic screening assays performed in accordance with the standards accepted by the pharmaceutical industry. The assays have been used as part of a strategy to reposition drugs for infectious diseases.