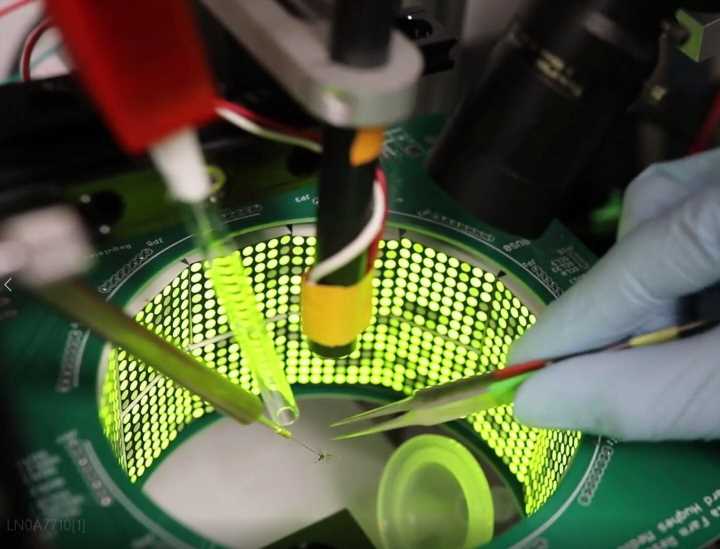 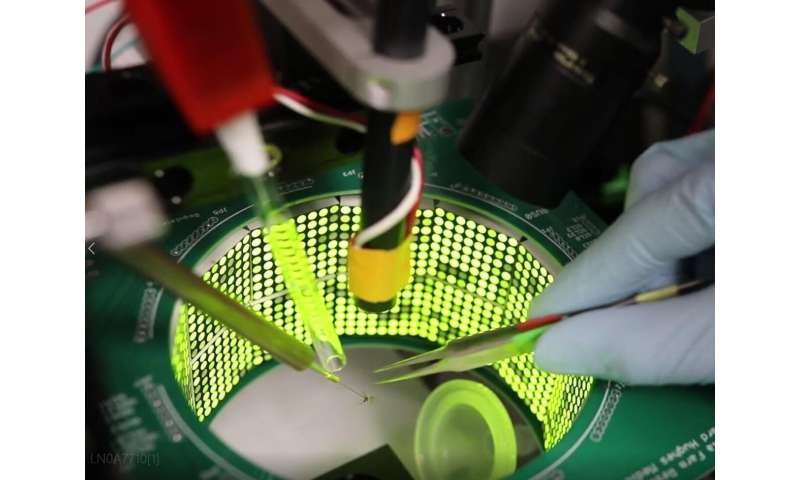 For female mosquitoes, finding their next meal is all about smelling and seeing.

Through behavioral experiments and real-time recording of the female mosquito brain, a team of scientists, led by researchers at the University of Washington, has discovered how the mosquito brain integrates signals from two of its sensory systems—visual and olfactory—to identify, track and hone in on a potential host for her next blood meal.

Their findings, published July 18 in the journal Current Biology, indicate that, when the mosquito’s olfactory system detects certain chemical cues, they trigger changes in the mosquito brain that initiate a behavioral response: The mosquito begins to use her visual system to scan her surroundings for specific types of shapes and fly toward them, presumably associating those shapes with potential hosts.

Only female mosquitoes feed on blood, and these results give scientists a much-needed glimpse of the sensory-integration process that the mosquito brain uses to locate a host. Scientists can use these findings to help develop new methods for mosquito control and reduce the spread of mosquito-borne diseases.

This study focused on the olfactory cue that triggers the hunt for a host: carbon dioxide, or CO2. For mosquitoes, smelling CO2 is a telltale sign that a potential meal is nearby.

“Our breath is just loaded with CO2,” said corresponding author Jeffrey Riffell, a UW professor of biology. “It’s a long-range attractant, which mosquitoes use to locate a potential host that could be more than 100 feet away.”

That potential host could be a person or another warm-blooded animal. Prior research by Riffell and his collaborators has shown that smelling CO2 can “prime” the mosquito’s visual system to hunt for a host. In this new research, they measure how CO2 triggers precise changes in mosquito flight behavior and visualize how the mosquito brain responds to combinations of olfactory and visual cues.

The team collected data from approximately 250 individual mosquitoes during behavioral trials conducted in a small circular arena, about 7 inches in diameter. A 360-degree LED display framed the arena and a tungsten wire tether in the middle held each mosquito. An optical sensor below the insect collected data about mosquito wingbeats, an air inlet and vacuum line streamed odors into the arena, and the LED display showed different types of visual stimuli.

The team tested how tethered Aedes aegypti mosquitoes responded to visual stimuli as well as puffs of CO2-rich air. They found that, in the arena, one-second puffs of air containing 5% CO2—just above the 4.5% CO2 air emitted by humans—prompted the mosquitoes to beat their wings faster. Some visual elements like a fast-moving starfield had little effect on mosquito behavior. But if the arena showed a horizontally moving bar, mosquitoes beat their wings faster and attempted to steer in the same direction. This response was more pronounced if researchers introduced a puff of CO2 before showing the bar. 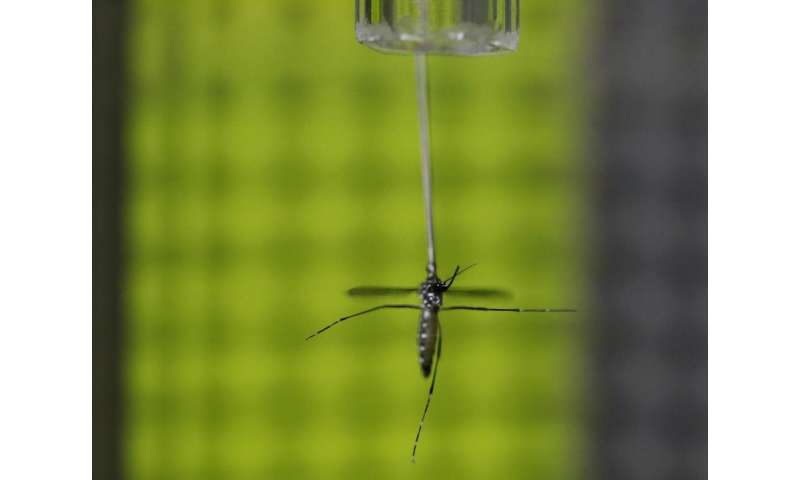 To get a clear picture of how smelling CO2 first affected flight behavior, they analyzed their data using a mathematical model of housefly flight behavior.

“We found that CO2 influences the mosquito’s ability to turn toward an object that isn’t directly in their flight path,” said Riffell. “When they smell the CO2, they essentially turn toward the object in their visual field faster and more readily than they would without CO2.”

The researchers repeated the arena experiments with a genetically modified Aedes aegypti strain created by Riffell and co-author Omar Akbari, an assistant professor at the University of California, San Diego. Cells in these mosquitoes glow fluorescent green if they contain high levels of calcium ions—including neurons of the central nervous system when they are actively firing. In the arena, the researchers removed a small portion of the mosquito skull and used a microscope to view neuronal activity in sections of the brain in real time.

The team focused on 59 “regions of interest” that showed especially high levels of calcium ion levels in the lobula, a part of the mosquito brain’s optic lobe. If the mosquito was shown a horizontal bar, two-thirds of those regions lit up, indicating increased neuronal firing in response to the visual stimulus. When the researchers introduced a puff of CO2 first and then showed the horizontal bar, 23% of the regions had even higher activity than before—indicating that the CO2 odor prompted a larger-magnitude response in these areas of the brain that control vision.

The researchers tried the reverse experiment—seeing if a horizontal bar triggered increased firing in the parts of the mosquito brain that control smell—but saw no response.

“Smell triggers vision, but vision does not trigger the sense of smell,” said Riffell.

Their findings align with the general picture of mosquito senses. The mosquito sense of smell operates at long distances, picking up scents more than 100 feet away. But their eyesight is most effective for objects 15 to 20 feet away, according to Riffell.

“Olfaction is a long-range sense for mosquitoes, while vision is for intermediate-range tracking,” said Riffell. “So, it makes sense that we see an odor—in this case CO2—affecting parts of the mosquito brain that control vision, and not the reverse.”