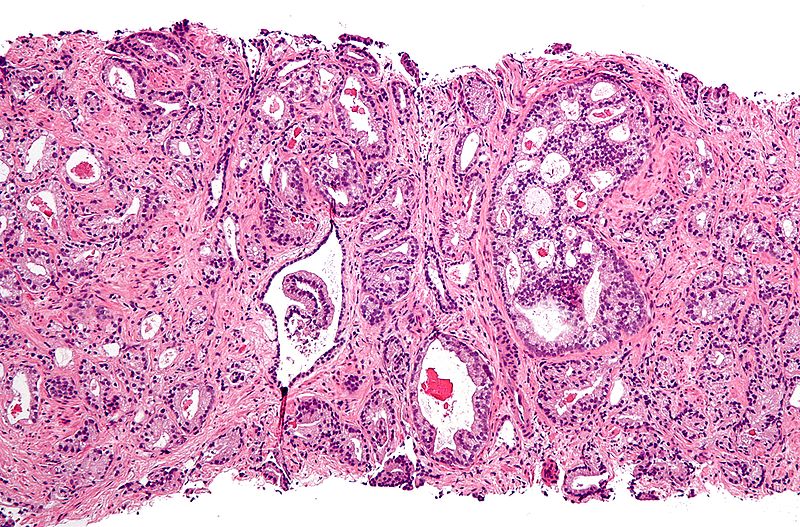 An international team of cancer researchers from Denmark and Germany have used cancer patient data to develop a computer model that can predict the progression of prostate cancer. The model is currently being implemented at a prostate cancer clinic in Germany. The researchers have also found an enzyme that appears to trigger some of the first mutations in prostate cancer.

Prostate cancer is one of the most frequently diagnosed cancers in men in the western world, comprising more than 1 million new cases each year. One of the key challenges is to differentiate between aggressive and non-aggressive courses. An international team involving researchers from BRIC at the Faculty of Health and Medical Sciences, the University of Copenhagen, and Rigshospitalet, the German Cancer Research Center (DKFZ) and the European Molecular Biology Laboratory (EMBL) in Heidelberg have addressed this challenge with a computer model.

The researchers studied the earliest mutational events in prostate cancer to develop the computer model, described in a new study that has just been published in Cancer Cell. The researchers collected patient data from nearly 300 men and sequenced the entire cancer genome of each subject to characterise all mutations present in the tumour. Based on the dataset, the researchers developed the computer model, which can predict how prostate cancer will develop for a given patient.

“If we have a patient with a particular set of mutations, we can use the model to predict the most likely next mutation that the patient will experience at some point—and how it will affect the patient’s clinical situation. As an illustration, we can predict with some probability that if you have mutation A, you are likely to get mutation B before you get C. We can also predict if the next mutation is likely to change the clinical outcome of the disease.”

“So far, our data sets comprise around 300 patients, but we expect to collect data from several thousand patients in the coming years. The model will improve with more data,” says group leader and co-author of the study Joachim Weischenfeldt, BRIC, UCPH.

The computer model is currently being implemented at a clinic in Germany. The researchers expect it will take two to three years to fully implement the model as an integral part of the clinic’s processes. In the future, the researchers hope that the model will be introduced at hospitals in other countries, for example, Denmark.

With genome sequencing, it becomes possible to tailor the treatment of individual patients—also referred to as personalised medicine. The subjects in the study are primarily so-called early onset patients. This group is defined as men who are diagnosed with prostate cancer before reaching the age of 55 years.

“Prostate cancer develops over many years. We have therefore been particularly interested in the group of patients for whom the cancer is detected at a young age, as this allows us to analyse the tumour at an early stage. This is an important element because in this way, we get a cleaner picture of the first mutations and alterations that occur in the tumour, to determine the initiating factor,” says co-author Doctor Clarissa Gerhauser, DKFZ.

So far, it has not been known precisely what initiates prostate cancer. However, due to the focus on the earliest detected tumours, the researchers uncovered a mutational mechanism involving an enzyme called APOBEC. This enzyme may help trigger the disease—i.e., trigger some of the very first mutations in prostate cancer.

“We hypothesise that this enzyme mutates the prostate cells at a low but constant rate. Each time the cell divides, APOBEC is likely to cause mutations. If you have early onset prostate cancer, you may have a couple of mutations caused by APOBEC. Twenty years later, you may have 10 to 20 mutations,” says co-author Doctor Jan O. Korbel, group leader at EMBL.

“The most common oncogene in prostate cancer involves a certain fusion gene. The APOBEC enzyme may contribute to the formation of this fusion gene. We cannot say that there is causality, but there is a strong correlation between mutations caused by APOBEC and other alterations such as this fusion gene,” says Joachim Weischenfeldt.