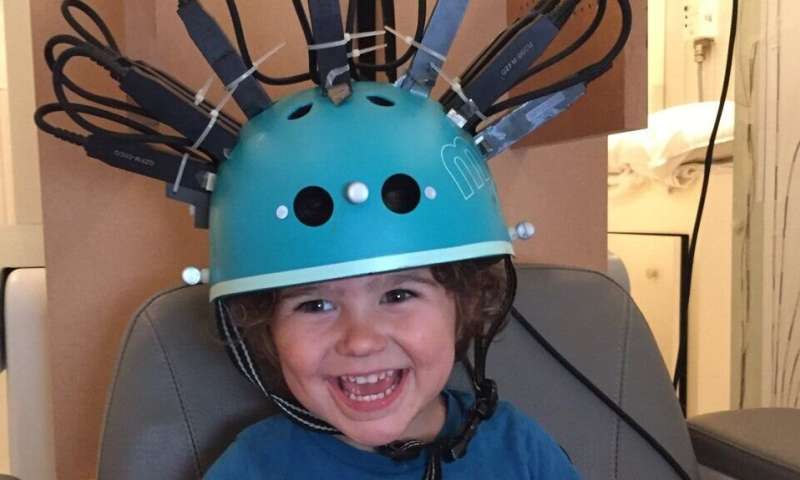 A new wearable ‘bike helmet’ style brain scanner, that allows natural movement during scanning, has been used in a study with young children for the first time. This marks an important step towards improving our understanding of brain development in childhood.

In a paper published in Nature Communications, researchers from the Sir Peter Mansfield Imaging Centre at the University of Nottingham, working in collaboration with researchers from the University of Oxford and UCL, demonstrate how they have enhanced their ground-breaking Magnetoencephalography (MEG) technology with a novel helmet design that they used to measure brain activity in young children engaging in natural activities.

As well as providing a new way to measure healthy brain function across the lifespan, it also opens up the opportunity to study a range of neurological and mental health conditions in children, including epilepsy and autism.

Brain cells operate and communicate by producing electrical currents. These currents generate tiny magnetic fields that can be detected outside the head. Researchers use MEG to map brain function by measuring these magnetic fields. This allows for a millisecond-by-millisecond picture of which parts of the brain are engaged when we undertake different tasks, such as speaking or moving.

Ryan Hill, the Ph.D. researcher who led this new study and said: “The foundations for human cognition are laid down in the first decades of life, but there have always been limited ways to study them due to restrictions in brain scanning technology. A particular problem has always been movement and the fact that the large traditional fixed scanners have always required patients to stay completely still. Not only does this fail give an accurate picture of the brain operating in a natural environment, but it also places severe restrictions on who can be scanned, with children representing the biggest challenge. “ 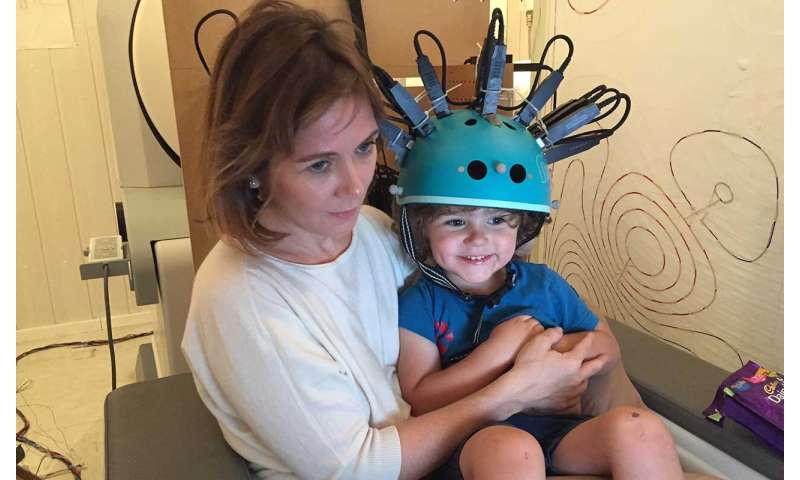 The research team in Nottingham have solved this problem by using new ‘quantum’ sensors which are very light in weight. This means that MEG technology, which traditionally requires a half tonne ‘one-size-fits-all’ machine, is reduced to a 500 g helmet which can adapt to any head size. Because the new sensors can be placed very close to the head, the amount of signal that they can pick up is vastly increased compared to conventional equipment (which requires sensors to be kept very cold (-269 degrees) and therefore far from the head). The research team have also developed special electromagnetic coils which enable accurate control of background magnetic fields, allowing individuals to be scanned whilst they move freely.

Ryan continues: “The initial prototype scanner was a 3-D printed helmet that was bespoke—in other words only one person could use it. It was very heavy and quite scary to look at. Here, we wanted to adapt it for use with children, which meant we had to design something much lighter and more comfortable but that still allowed good enough contact with the quantum sensors to pick up signals from the brain. We designed and built a new bike helmet style design and using this we were able to successfully analyse brain activity of a 2 and 5-year-old whilst they were doing an everyday activity, in this case watching TV whilst their hands were being stroked by their mum. They were able to move around and act naturally whilst doing this. To show that the system is equally applicable to older children, we used it, with a larger helmet, to scan a teenager playing a computer game.”

Professor Matthew Brookes, who leads the MEG research at the University of Nottingham, said: “This study is a hugely important step towards getting MEG closer to being used in a clinical setting, showing it has real potential for use in children. The challenge now is to expand this further, realising the theoretical benefits such as high sensitivity and spatial resolution, and refining the system design and fabrication, taking it away from the laboratory and towards a commercial product.”