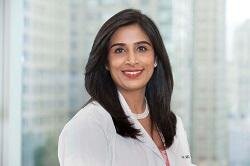 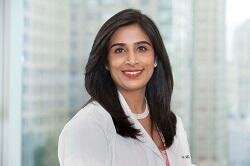 The antibody-drug conjugate ado-trastuzumab emtansine (T-DM1) has promising activity in HER2 amplified salivary gland tumors, according to data published in the Annals of Oncology. The publication is for ‘Arm Q,’ which is one of nearly 40 single-arm phase two treatments in the NCI-Molecular Analysis for Therapy Choice (NCI-MATCH or EAY131) trial. NCI-MATCH is being co-led by the ECOG-ACRIN Cancer Research Group (ECOG-ACRIN) and the National Cancer Institute (NCI), part of the National Institutes of Health.

“We saw that two of the three NCI-MATCH patients with salivary gland tumors had significant tumor shrinkage by at least 30% with T-DM1 treatment, and this benefit lasted,” said lead researcher Komal Jhaveri, MD, FACP, a medical oncologist and early-phase clinical trials specialist at Memorial Sloan Kettering Cancer Center in New York. “The benefit lasted two years in the patient with squamous cell cancer of the parotid gland, and nine months in the case of mucoepidermoid carcinoma of the parotid gland.”

“This is a hint of activity that needs to become the focus of a larger trial,” said Dr. Jhaveri.

Another recent T-DM1 trial (not part of the NCI-MATCH trial) reported interim results at the 2019 annual meeting of the American Society of Clinical Oncology. In that trial (NCT02675829), nine of the 10 patients with salivary gland cancers treated with T-DM1 responded either with tumor shrinkage by computed tomography (CT) scan or as assessed by positron emission tomography (PET). As a result, that trial has since been expanded to enroll additional patients.

T-DM1 is a targeted therapy that contains the monoclonal antibody trastuzumab, which binds to the HER2 protein found on some cancer cells. It also contains the cytotoxic drug DM1, which inhibits tumor cell division. Unlike chemotherapy, antibody-drug conjugates like T-DM1 are intended to target and kill tumor cells while sparing healthy cells. T-DM1 has improved overall survival and led to a new standard of care in HER2-positive metastatic breast cancer previously treated with trastuzumab and a taxane.

The primary objective of each arm in NCI-MATCH is to estimate the proportion of patients who had an objective response (OR). Under predefined criteria, an OR rate greater than 16% in a given NCI-MATCH arm would warrant further study of the agent(s).

Although the results from Arm Q did not meet these criteria, the signal in salivary gland tumors is important.

“We are excited about the prospect of this and other upcoming MATCH arms to shed new light on responsive tumor types, as there is far less data available in rare and uncommon disease types from previously conducted trials,” said Keith T. Flaherty, MD, a medical oncologist at Massachusetts General Hospital Cancer Center in Boston and ECOG-ACRIN study chair for the overall NCI-MATCH trial. “Salivary cancer is a particularly understudied area and seeing evidence of benefit for a molecularly targeted approach strongly supports further focus on this cancer type.”

Of the 38 patients enrolled in Arm Q, 36 were included in the efficacy analysis. Overall, this was a heavily pretreated group of patients with multiple unique histologies (excluding breast and gastric). Seventeen patients (47%) had stable disease with median duration of 4.6 months, including eight of 10 patients with ovarian and uterine carcinomas. The six-month progression-free survival rate was 23.6%. Common toxicities were fatigue, anemia, fever and thrombocytopenia. However, this arm did not find any new toxicities for T-DM1.