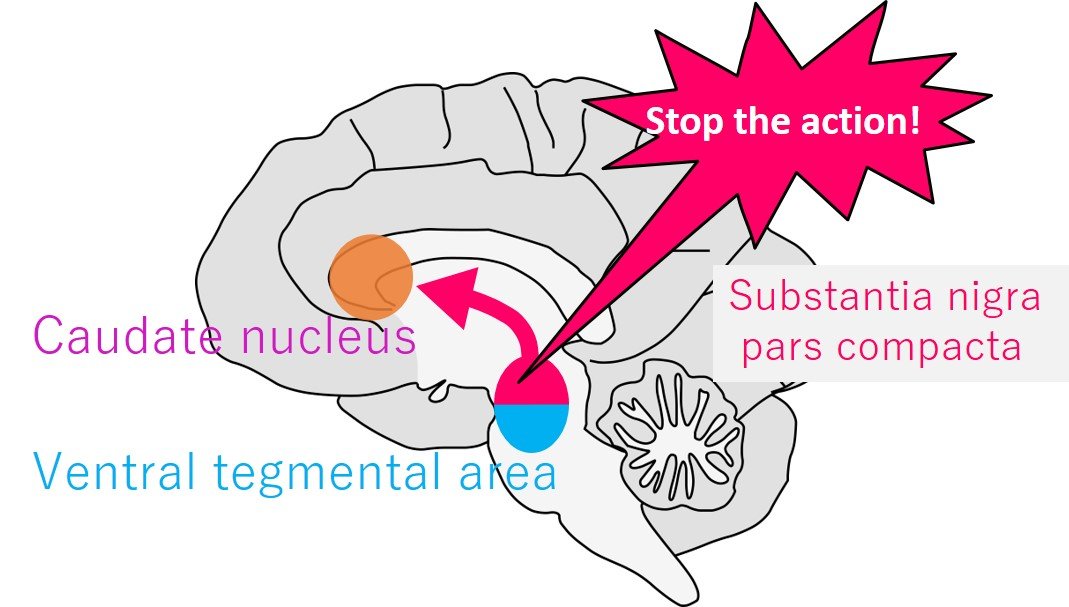 University of Tsukuba researchers report the importance of the brain’s dopaminergic system for inhibiting already-planned actions. They trained monkeys to redirect their gaze toward targets presented on a screen, apart from when presented with signals to avoid such redirection. Simultaneous analysis showed that the activity of dopaminergic neurons correlated with successful refusal to redirect gaze to a new target. These findings could aid the development of treatments for diseases with impaired inhibition such as Parkinson’s.

Among the diversity of behaviors implemented by the brain, the prevention of actions that might be beneficial in a certain context, but counterproductive or harmful in another, is particularly important. Some insights into how the brain achieves this have been obtained, but much remains unclear, including the involvement of the neurotransmitter dopamine. Shedding light on this would explain much about how behavioral control is achieved, and could help treat diseases in which inhibition of certain actions is impaired.

In a study involving analyses of gaze fixation and the visual tracking of targets in rhesus monkeys, researchers at University of Tsukuba have shown that the brain’s dopamine system is key to the subsequent inhibition of actions that have already been planned.

In this work, reported in the journal Neuron, the team placed two monkeys in front of a computer screen and, using the provision of reward in the form of drinks, trained them to direct their gaze at targets on the screen presented in different patterns. The monkeys were trained to redirect their attention away from the center of the screen to another target in 70 percent of the trials, but to resist the temptation to do this in 30 percent of the trials when signaled to do so.

Via visual scans using an infrared eye-tracking system, the researchers also measured neuronal attention at single-neuron resolution while the monkeys looked at the screen. The researchers recorded approximately 40 dopamine-related neurons in each of the monkeys, and analyzed the correlations between their activities and success or failure in resisting redirecting their gaze to a new target in the 30 percent of trials.

“Using this experimental setup, we found that these dopaminergic neurons tended to be active when the monkeys successfully resisted the urge to redirect their gaze,” Masayuki Matsumoto says. “We then confirmed that it was the dopaminergic system that caused this response inhibition by injecting drugs that block dopaminergic neurotransmission.”

The team’s findings reveal details about the specific brain regions and neurological pathways involved in this response inhibition, showing that dopaminergic neurons in the substantia nigra as well as striatal neurons are key to canceling a previously planned action. The duration of the pause between the initial command and the subsequent inhibitory counter-command also influenced the monkeys’ success in the trials, providing hints about the mechanisms involved.