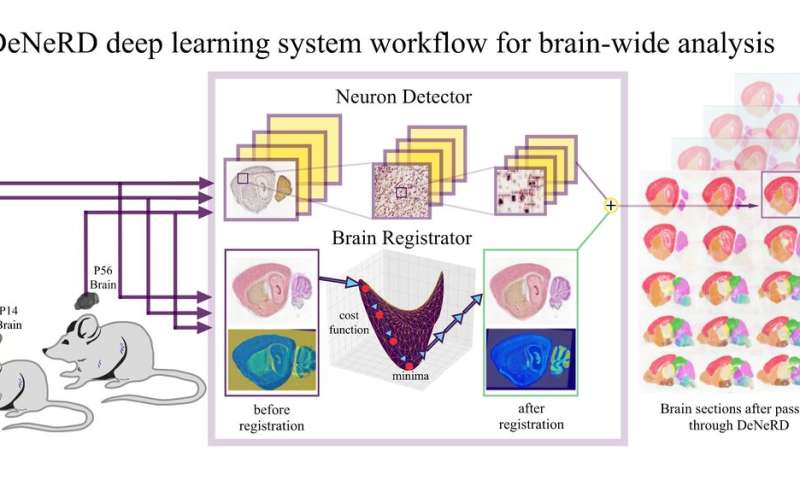 Researchers at the University of Zurich’s Brain Research Institute have recently developed a technique to automatically detect neurons of different types in a variety of brain regions at different developmental stages. They presented this deep learning-based tool, called DeNeRD, in a paper published in Nature Scientific Reports.

Mapping the structure of the mammalian brain at the cellular level is an important, yet demanding task, which typically involves capturing specific anatomical features and analyzing them. In the past, researchers were able to gather several interesting observations and insights about the mammalian brain’s structure using classical histological and stereological techniques. Although these methods have proved to be very useful for studying the anatomy of the brain, carrying out a truly brain-wide analysis typically requires a different approach.

So far, researchers have proposed numerous methods to analyze the cellular composition of the brain as a whole, which can including tools that can detect and count brain cells. While some of these methods have achieved promising results, most of them do not perform as well when analyzing highly complex brain imaging data, especially from dense signal regions. Aware of the limitations of existing techniques for detecting and counting brain cells, the team at UZH developed a new fully automated technique for whole-brain image processing called DeNeRD.

“Necessity is the mother of invention, and our motivation to develop the DeNeRD system for neuron detection in brain images emerged due to the lack of generalized frameworks that can easily be deployed to perform brain-wide analysis,” Asim Iqbal, one of the researchers who carried out the study, told TechXplore. “Instead of relying solely on a computer vision-based approach, we decided to opt for a machine learning (ML) / artificial intelligence (AI)-based technique, which has a clear advantage over the former in providing a scalable and generalized solution for analysing large scale imaging datasets.”

DeNeRD, the brain-processing technique devised by Iqbal and his colleagues, is a state-of-the-art solution that can be applied to a variety of real-world imaging tasks, including object classification, detection and segmentation. The researchers drew inspiration from a high-performing deep neural network known as Faster R-CNN, which is among the most advanced techniques for object detection. In their study, however, they optimized this deep learning model and specifically trained it to detect neurons in whole-brain images of mouse brains, which were taken at different developmental ages (e.g., postnatal day P4, P14, , P56, etc.).

Firstly, the researchers collected a dataset of brain images and labeled them, placing bounding boxes around neurons using a simple graphics program. Subsequently, they trained their deep neural network on these images, essentially teaching it to detect and count brain cells. 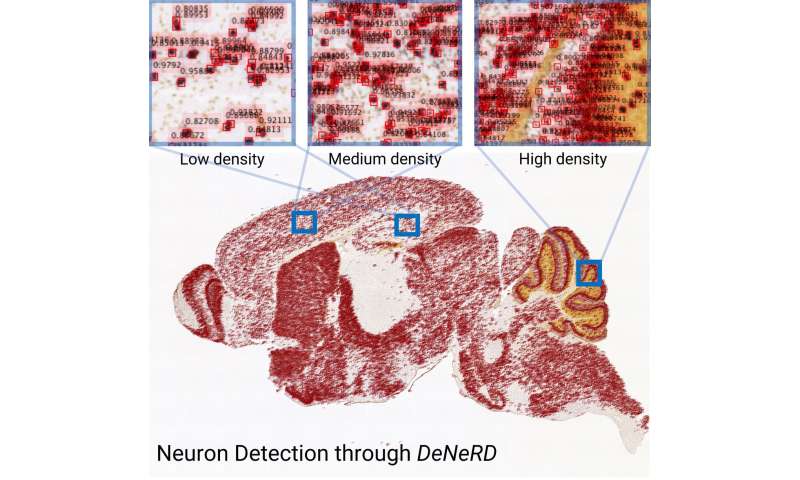 Upon completion of this training, the DeNeRD model was able to perform thorough analyses of whole-brain images with automated neuron detection and brain-image registration. Iqbal and his colleagues evaluated their method in a series of tests and found that it performed remarkably well, detecting neurons labeled with different genetic markers across a wide range of images collected using various imaging techniques.

“Our method is invariant to the scale, size, shape and intensity of neurons in brain images which is ideal to perform neuron detection using a single deep neural network for a variety of brain imaging samples,” Iqbal said. “In addition, our method outperforms existing neuron detection methods by providing a minimum error and a high mean average precision.”

In the future, the technique could be used to carry out more in-depth analyses of the mammalian brain rapidly and automatically. Interestingly, DeNeRD’s performance is generic, which essentially means that new users do not need to collect new datasets, label them and retrain the neural network before they can use it.