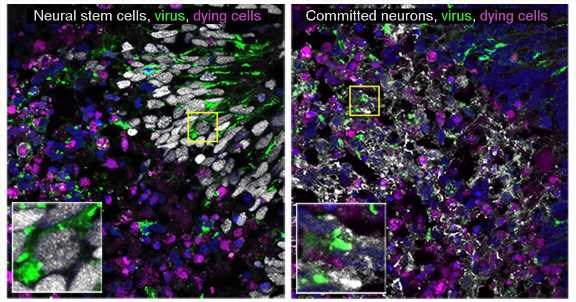 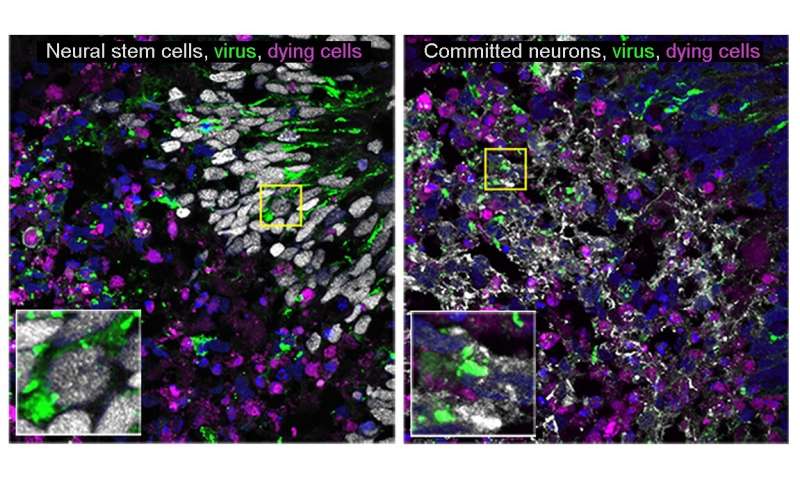 Scientists have determined that La Crosse virus (LACV), which can cause inflammation of the brain, or encephalitis, in children, affects brain cells differently depending on their developmental stage. Neurons—the primary brain cells of the central nervous system—evolve from neural stem cells and during development “commit” to becoming neurons. A new National Institutes of Health study shows that uncommitted neural stems cells generally survive LACV infection, while LACV often kills neurons. The study also shows that neurons infected by LACV can be rescued by interferon, a powerful antiviral protein. The study results appear in the Journal of Neuroinflammation.

LACV is spread by mosquitoes and was first identified in the early 1960s. Most infections in people are mild but the virus sometimes—particularly in children—enters the brain, infects neurons and causes disease ranging from learning and memory difficulties to paralysis, seizures and death. The Centers for Disease Control and Prevention receives reports of an average of 68 LACV encephalitis cases each year in the United States, nearly all east of the Mississippi River.

The NIH scientists, from the National Institute of Allergy and Infectious Diseases Rocky Mountain Laboratories in Hamilton, Montana, used cerebral organoids to model how LACV infects the human brain. Cerebral organoids are small spheres of human brain cells ranging in size from that of a poppy seed to a small pea. Importantly, cerebral organoids contain different neuronal cell types, which allowed the investigators to assess the sensitivity of neural stem cells and neurons to LACV infection.

After infecting cerebral organoids with LACV, the researchers observed that the virus was more likely to kill neurons, and they also found that the immune response to the virus was weaker in those cells than in neural stem cells. The largest observed difference was in genes activated by interferon, which are important in protecting cells from viruses.