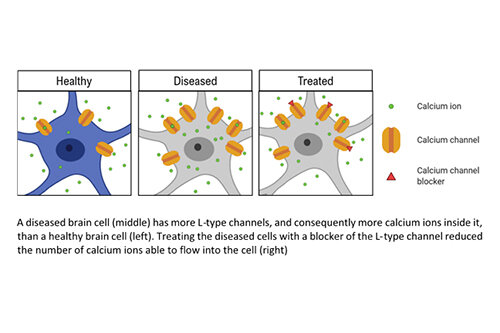 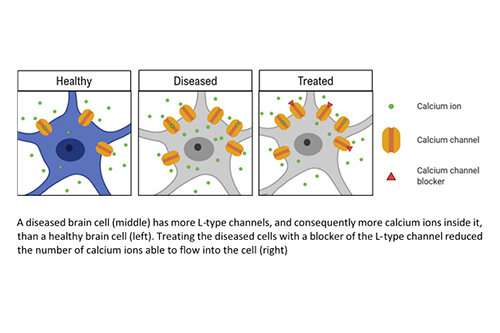 Alzheimer’s disease (AD) is the most common cause of dementia but the changes in brain cell function underlying memory loss remains poorly understood. Researchers at the University of Bristol have identified that calcium channel blockers may be effective in treating memory loss.

The team’s findings, published in Frontiers in Cellular Neuroscience, found treating a diseased brain cell with a blocker of the L-type channel reduced the number of calcium ions able to flow into the brain cell.

They found that diseased brain cells become overloaded with calcium ions, which at normal levels are important for memory formation. This overload was due to the overproduction of the gene encoding a channel, known as the L-type channel, which allows calcium ions to flow into the cell from outside. More of these channels means more calcium ions are able to flow into the cell, disrupting memory formation. Using a drug to block the L-type channel reversed the effect of disease and reduced the flow of calcium ions to a normal level.

The research team also investigated the memory of fruit flies by testing if they could remember which of two odours had previously been paired with an electric shock—similar to Pavlov’s experiments with dogs.

While healthy flies remembered well, the diseased flies, like humans, displayed impaired memory. However, if the overproduction of L-type channels was corrected in the diseased flies, their brain cells were no longer overloaded with calcium ions and their memory was just as good as healthy flies. This shows that memory loss is likely due to calcium overload because too many L-type channels are made and, if this is corrected, memory impairment is rescued.

Dr. James Hodge, associate professor in neuroscience in the School of Physiology, Pharmacology & Neuroscience, said: “Memory loss in Alzheimer’s disease (AD) is a highly distressing and difficult to treat symptom. Targeting the early changes in brain cell function—before they begin to degenerate—may be effective in treating memory loss.

“L-type channels have been thought to have a role in AD for some time and this study shows a direct link between memory loss and L-type channel overproduction in brain cells.”