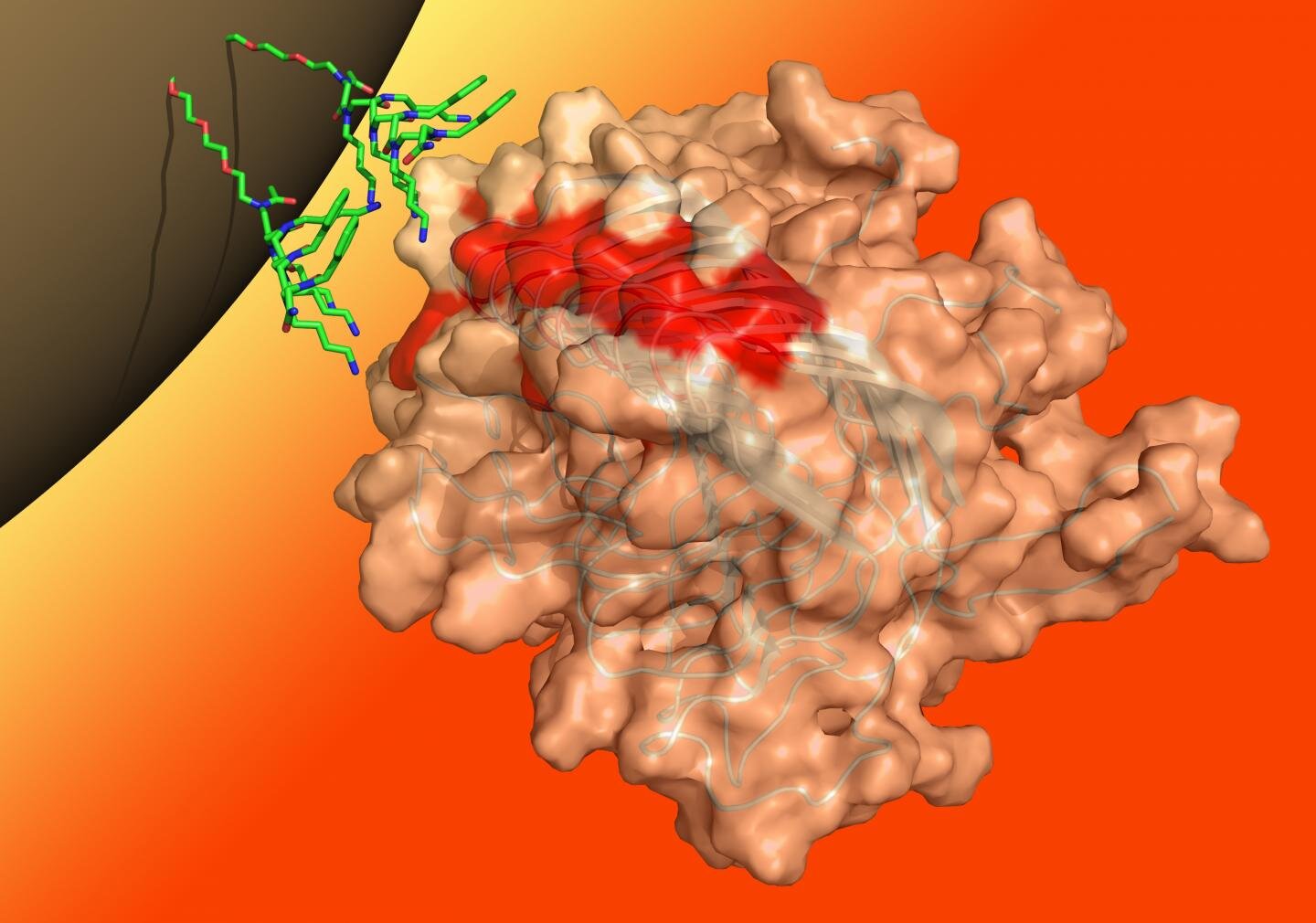 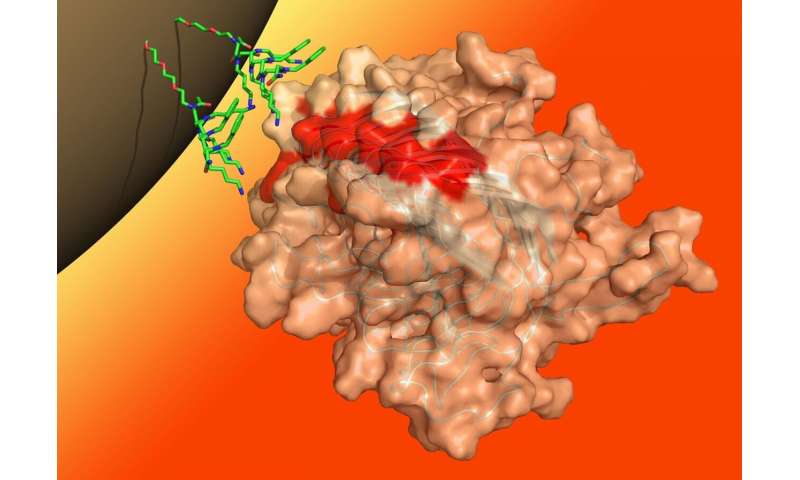 There are currently no effective treatments for prion diseases, a family of fatal neurodegenerative conditions caused by accumulations of misfolded copies of a naturally occurring protein. But now, there is finally an effective way to test for them.

As reported in the journal PLOS ONE, a team of scientists who have been working on prion detection for nearly 20 years have demonstrated that their unique, synthetic-molecule-based approach can isolate prion proteins in body fluids sampled from infected animals. This finding—which confirms that their test is the only published testing method capable of quick, noninvasive prion detection in living subjects—is a momentous milestone in the evolution of a biomedical technology with far-ranging applications.

“Our peptoid beads have the ability to detect the misfolded proteins that act as infectious agents, so it could have a significant impact in the realm of prion diseases, but we have also shown that it can seek out the large aggregated proteins that are the disease agents in Alzheimer’s and Parkinson’s diseases, among others” said Ronald Zuckermann, an early pioneer of peptoids and one of the research team’s founding members. Zuckermann is now a senior scientist at Lawrence Berkeley National Laboratory (Berkeley Lab)’s Molecular Foundry.”Prion diseases are rare, but there are many misfolded protein-based diseases, which affect millions of people, that are also very poorly understood. And like prion diseases, we need a way to diagnose these slow-onset conditions in the years before symptoms arise.”

Peptoids are artificial compounds made to mimic peptides, the short chains of amino acids that serve as protein building blocks. The team’s beads are tiny magnets covered in peptoids that mimic part of the prion protein. When added to a liquid sample, the peptoid-bead units latch onto misfolded prion protein aggregates but leave normal proteins alone.”It’s like Velcro,” said co-author Michael Connolly, senior scientific engineer of the Molecular Foundry’s biological nanostructures group. “The aggregated misfolded protein has multiple hooks—multiple binding sites—that will attach to the bead, which is like the complementing sheet. But the natural, correctly folded protein only has a single hook, so its binding affinity is much less.”

Once bound, the misfolded proteins are pulled out of the liquid magnetically, and then run through a test called the misfolded protein assay (MPA), which was developed by scientists at Novartis and senior author Adriano Aguzzi, a neuropathologist and renowned expert in prion diseases.

“On top of potentially detecting asymptomatic disease carriers, the peptoid-bead MPA could be optimized to screen blood and blood products in a cheap and fast manner, a capability that will be very important for avoiding accidental transmission in case of a new prion disease outbreak,” said first author Simone Hornemann, a senior researcher in Aguzzi’s group at the University Hospital Zurich’s Institute of Neuropathology. “This assay could also be modified to test deer and elk for chronic wasting disease (CWD), a prion disease that is considered as a global epidemic in these animals.”

The strange world of prions

Formally known as transmissible spongiform encephalopathies, or TSEs, prion diseases occur in many species of mammals. They typically onset when, for unknown reasons, the individual’s prion proteins begin to take on a particular misfolded shape, and through a mysterious molecular mechanism then act as unstoppable infectious agents that induce other, normal copies of the prion protein to also take on the misfolded shape and stick together in clumps.

These protein tangles get deposited throughout the nervous system, inducing a pattern of widespread cell death that gives brain tissue a distinctive sponge-like appearance. Though this “sporadic” form is the most common, prion diseases may also arise from an inherited genetic mutation in the prion protein, or from exposure to a misfolded prion protein from another individual—including those from a different species.

Once considered to be separate, isolated medical oddities, the scientific community began connecting the dots between the many forms of prion diseases in the mid-20th century, and finally identified the underlying prion protein in 1985. Yet even after this discovery, developing diagnostic tests and possible treatments, let alone even studying the conditions, remained challenging. The biggest obstacle is that all affected individuals have extremely low concentrations of the misfolded protein in their blood and other fluids, but the normal form of the protein is present in abundance.

Then, in the late 1980s, a sizable outbreak of bovine spongiform encephalopathy (famously known as “mad cow disease”) in European cattle and several hundred associated cases in humans illuminated just how rapidly prion illnesses can spread, given the globalized trade of biological products. These events spurred the medical community to prioritize research toward an efficient, mass-producible test that could be used to screen for the presence of prions in living patients, foods, and animal-based goods.

It was during this urgent scientific movement that Zuckermann, Connolly, and Aguzzi first teamed up.

“Back in the ’90s, we were at a company, now part of Novartis, that was interested in detecting these types of diseases in blood, and at the time this seemed pretty farfetched,” said Zuckermann. On top of being sensitive enough to isolate the low levels of prions and specific enough to not generate false positives from the normal protein, any potential binding agent has to be able to withstand the protein-degrading enzymes that are naturally circulating in blood. “The diagnostic task sounded straightforward because this is an aggregate of the same protein wanting to link to itself; so if you just stick one of its peptides on a bead or an antibody then it should bind automatically,” said Zuckermann. Connolly explained, “But other groups kept running into problems because those binding proteins were being broken down before an assay could be completed. They came to Ron and I because we showed you could make an analogue that doesn’t degrade.”

After early experiments in blood and plasma proved promising, the authors undertook a series of studies to formally prove its efficacy. Through these investigations, which ultimately led to the current study, Zuckermann, Connolly, and their Novartis collaborators demonstrated that the peptoids will bind to a variety of animal prions and other disease-causing protein aggregates.

While this research was unfolding, in 2006, Zuckermann and Connolly joined the Molecular Foundry to establish the biological nanostructures facility. They have since developed an automated synthesis technique that can mass-produce peptoids of any desired sequence—a unique capability offered to the scientific community through the Molecular Foundry’s user program.