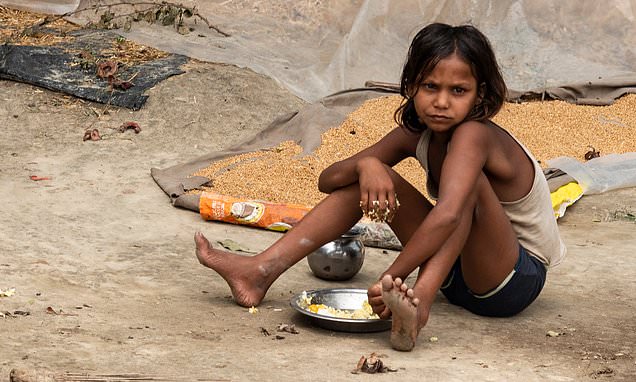 World hunger has risen for the third consecutive year, UN officials have revealed.

A report by the global organisation shows more than 820million people were malnourished in 2018.

The issue began to spiral in 2015, before affecting 811million people all over the world two years later.

Experts blame climate change for a ‘shift’ in how food is produced, which has led to ‘new nutrition challenges’.

They also warn the goal of ‘zero hunger by 2030’ will ‘not be achieved’ at this rate.

At the same time, the UN report also notes obesity is on the rise all over the world, which it puts down to an insufficient supply of healthy food.

While Asia and Africa are home to nine out of 10 of the world’s malnourished children, they also house nearly three quarters of its overweight youngsters, the report states. 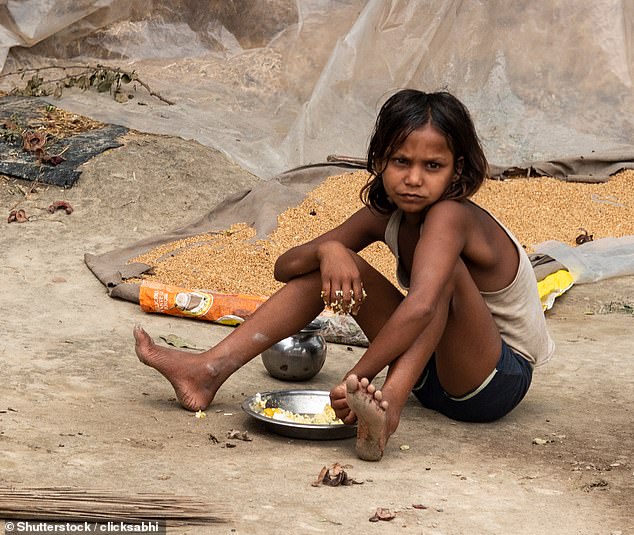 The report was put together by the UN Food and Agriculture Organization (FAO), the International Fund for Agricultural Development, Unicef, the World Food Programme and the World Health Organization.

Climate change and conflict is said to have triggered a spike in global malnutrition four years ago, the report states.

This is worst in Africa, where up to 20 per cent of the population struggle to put food on the table.

Asia also has a widespread malnutrition problem, with around 12 per cent of people going hungry.

In Latin America and the Caribbean, less than seven per cent of people are malnourished.

When the number impacted by malnutrition and food insecurity are combined, more than two billion people are affected. Eight per cent of these are in North America and Europe.

The report’s authors blame climate change for affecting farming, which has resulted in less people taking up the profession.

‘This has led to major shifts in the way in which food is produced, distributed and consumed worldwide – and to new food security, nutrition and health challenges,’ they wrote.

Technology is also ‘evolving at a dizzy pace’, which has caused the global economy to become increasingly ‘interconnected’.

Malnutrition is a serious condition that occurs when a person’s diet is missing nutrients.

This can refer to undernutrition – not getting enough vitamins and minerals – or overnutrition – getting more nutrients than you need.

Overnutrition can lead to obesity.

Signs of undernutrition include:

In the UK, people with diseases like Crohn’s, which affect how nutrients are absorbed, are most at risk.

Those with swallowing difficulties or people who are socially isolated, immobile or poor are also at risk.

Treatment is usually fortified foods that are high in calories and protein.

Nutrition can also be given intravenously.

Malnutrition can be prevented by eating a healthy, balanced diet.

This includes plenty of fruit and vegetables, some dairy, and some meat, fish, eggs and beans.

‘Many countries, however, have not witnessed sustained growth as part of this new economy,’ the authors wrote.

The report also notes how obesity, which it refers to as a form of malnutrition, is also on the rise.

Across the world, 338 million children and teenagers are overweight, while 672 million adults are obese, The Guardian reported.

Perhaps surprisingly, many of these people live in Africa and Asia.

Graziano da Silva, director-general of the FAO, said: ‘Obesity is out of control.

‘We were anticipating big hunger in Asia.

‘Now, we are anticipating a big crisis due to the rise of obesity.

‘And this trend takes more time and is more complex [to resolve] than hunger.’

Cindy Holleman, senior economist at the FAO and the report’s editor, added: ‘We need to look beyond hunger.

‘If we just focus on hunger, we’re going to be missing a lot of the growing problems we’re seeing.’

Reversing the global hunger problem by 2030 is one of the UN’s Sustainable Development Goals.

However, this remains an ‘immense challenge’ that is looking increasingly unobtainable.

David Beasley, head of the World Food Programme, said: ‘We will not achieve zero hunger by 2030.’

‘Without food security we will never have peace and stability.’

The FAO added existing efforts are insufficient to halve the number of children whose growth is stunted by malnutrition by 2030 – another UN goal.

Around 149 million of the world’s children suffer from hunger-related growth delays, statistics show.

Mr Beasley warned that extremist groups were using hunger and control over food supplies as a weapon to divide communities or recruit new members.

The report’s authors wrote: ‘To safeguard food security and nutrition, it is critical to already have in place economic and social policies.

‘[These] counteract the effects of adverse economic cycles when they arrive, while avoiding cuts in essential services, such as healthcare and education, at all costs.’

Robin Willoughby, head of food and climate policy at Oxfam GB, said women are hit hardest by the rise in hunger.

‘A toxic brew of climate shocks, inequality and conflict is unravelling years of progress,’ he said.

‘If we are to meet the target of ending hunger by 2030, governments must urgently cut greenhouse emissions, provide more support for small-scale agriculture and increase efforts to end violent conflicts.’

The report’s authors added a ‘structural transformation’ is needed that includes the world’s poorest people.

This requires ‘integrating food security and nutrition concerns into poverty reduction efforts’, alongside tackling gender inequality and the exclusion of certain social groups.