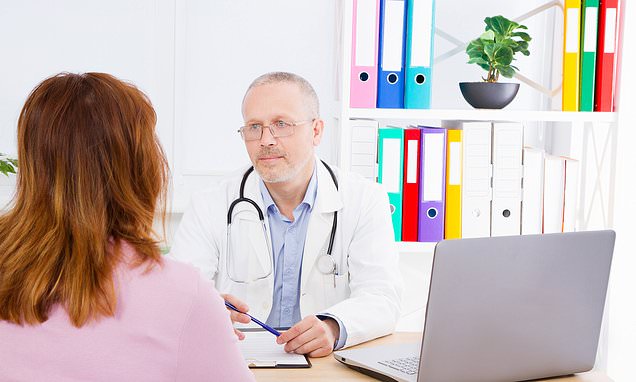 Women will be told not to be afraid of smear tests in new NHS campaign, after shocking figures show thousands are ignoring cervical cancer screening because they are ‘too embarrassed’

Women will be told not to be afraid of having their smear test as part of a major NHS awareness campaign.

It follows widespread alarm at figures showing uptake of the cervical screening programme is at an all-time low.

The trend has been blamed on embarrassment, as well as a lack of GP appointments.

Yesterday’s Daily Mail highlighted research by a charity showing 80 per cent of women had delayed the tests because they felt body conscious. Experts warn that millions are putting their lives at risk because they are too embarrassed to be tested for cervical cancer.

The new campaign, overseen by Public Health England, begins in six weeks’ time. It will involve adverts on TV and social media explaining the importance of smear tests.

Screening has been credited with saving an estimated 5,000 lives in the UK each year by detecting abnormal cells before they turn cancerous. 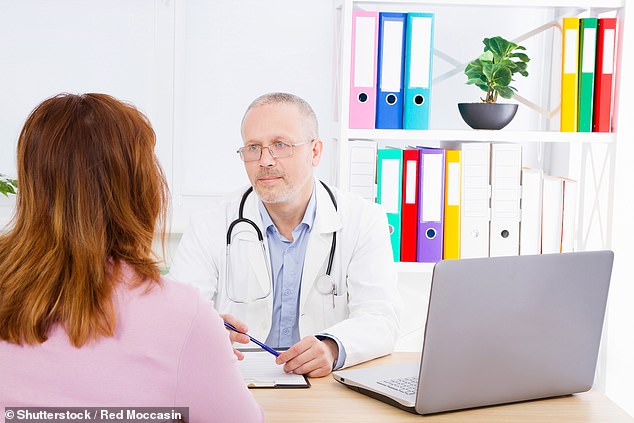 The Public Health England campaign will launch in March. It comes after research revealed women might be putting their health at risk by not having the test

The campaign will also highlight risk factors for cervical cancer, including infection with the sexually transmitted HPV virus, smoking and taking the Pill. It is the most common form of cancer in women under 35, with 3,000 new cases in the UK each year and 1,000 deaths.

The PHE campaign, Be Clear On Cancer, comes almost ten years after the death of Jade Goody on March 22, 2009. The reality TV star, who was only 27, had missed numerous smear test appointments despite having previously received abnormal results. Her death initially led to a spike in smear test attendances, which became known as the ‘Jade Goody effect’.

However, the latest figures from NHS Digital show that only 71 per cent of women are up to date on screening, with approximately five million overdue.

This has dropped from a high of 75.7 per cent in 2011 – two years after Miss Goody’s death – and is at its lowest rate since records began. According to Jo’s Trust, the cervical cancer charity, the fall is partly due to embarrassment as well as a lack of GP appointments outside working hours. 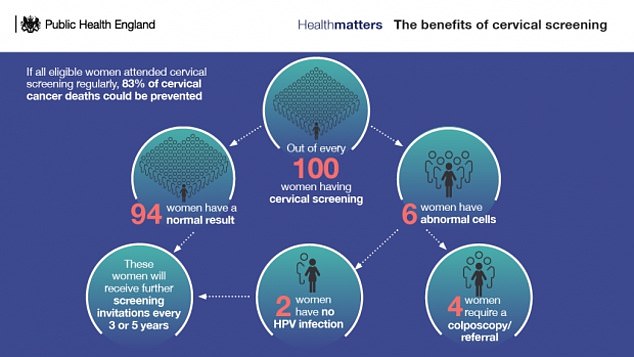 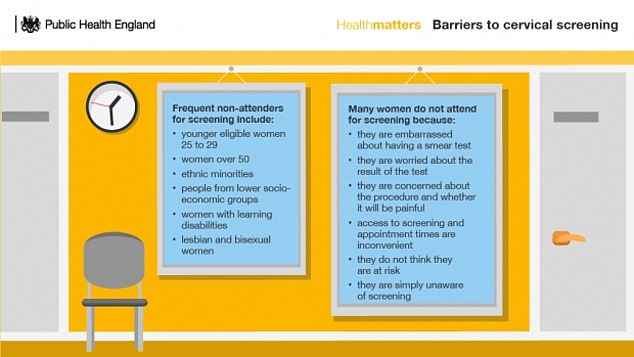 The test is offered every three years for women aged 25 to 49, and then every five years for those aged 50 to 64.

It checks for abnormal, pre-cancerous cells in the cervix which can be removed before they become harmful.

Around one in 20 women are found to have abnormal cells but not all will need to have them surgically removed.

Professor Anne Mackie, Public Health England’s director of screening, said: ‘The Be Clear On Cancer campaign will play a vital role in raising the awareness of cervical screening, as it’s a real concern that fewer women – particularly younger women – are taking screening up.

‘We know that for some women worries about embarrassment or discomfort can put them off taking the test.

‘We hope the campaign will make it clearer to them what the test involves so they can decide if it’s right for them.’

A total of 81 per cent said they felt embarrassed about smear tests, 71 per cent scared and 67 per cent reported not having control over the process.