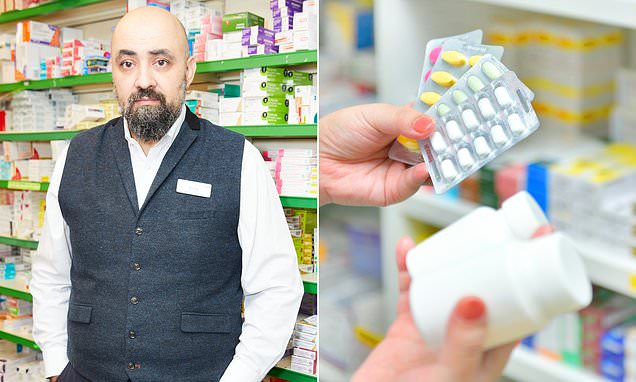 Why the Strep A crisis could be the last straw for cash-strapped local chemists: Supplies of antibiotics dried up and wholesalers’ prices shot up from £1.60 for a pack to £19

Earlier this month, Dervis Gurol was the only pharmacist on a ten-mile stretch of England’s crowded South Coast to stock vital drugs that GPs had prescribed to parents terrified their children had caught potentially lethal Strep A infections. In a single day he dispensed 300 antibiotics prescriptions.

But only days before, Dervis, 41, of Healthy-U Pharmacy in Saltdean, East Sussex, had been forced to ask his bank for emergency credit just to tide over his business.

How can such a busy chemist’s shop be in such dire financial straits?

The answer starkly exposes how England’s independent community pharmacies are being driven into bankruptcy by an NHS system that effectively financially penalises them every time they dispense a prescribed drug, particularly when shortages and price hikes send drug prices soaring. 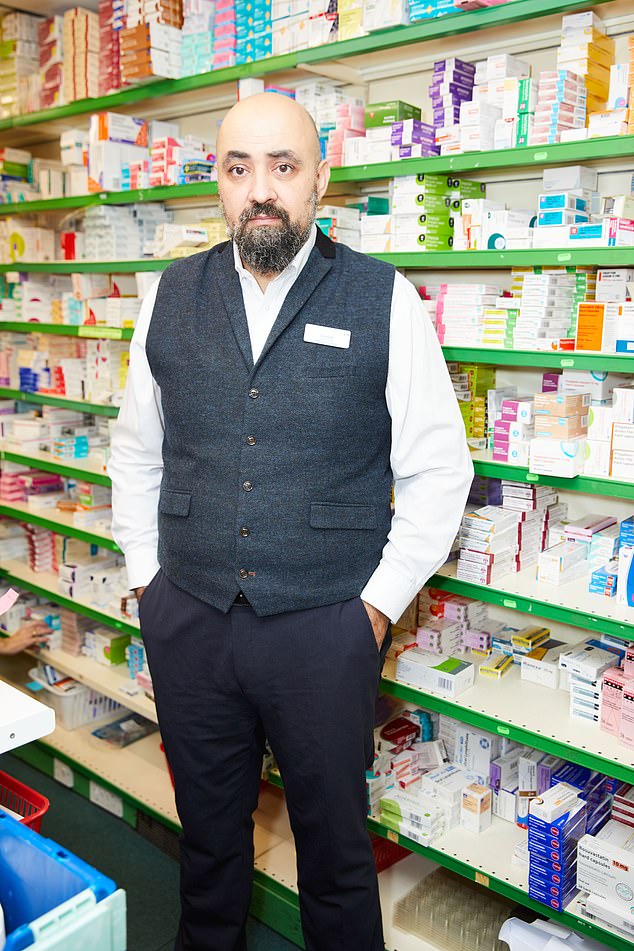 Earlier this month, Dervis Gurol was the only pharmacist on a ten-mile stretch of England’s crowded South Coast to stock vital drugs that GPs had prescribed to parents terrified their children had caught potentially lethal Strep A infections

A surge in contagious Strep A cases across the UK has involved the deaths of at least 24 children in England alone from invasive Strep A infections, as well as from scarlet fever (which is caused by the bacteria but is normally less serious).

In response, the UK Health Security Agency urged GPs to have a ‘low threshold’ for prescribing antibiotics to children with symptoms of Strep A. This caused a surge in demand for four antibiotics: amoxicillin, penicillin V, azithromycin and cefalexin.

As far as the NHS is concerned, however, the pack price remains at £1.60 — and that is all it may pay Dervis, no matter what he spends on securing desperately needed stocks.

‘I rolled the dice and paid the extortionate prices because I couldn’t face the thought of children’s lives being put at serious risk,’ he says.

As a result, Dervis says his pharmacy was the only one that could fill the antibiotic prescriptions for a ten-mile stretch of coast around Brighton, to the great relief of countless desperate parents. 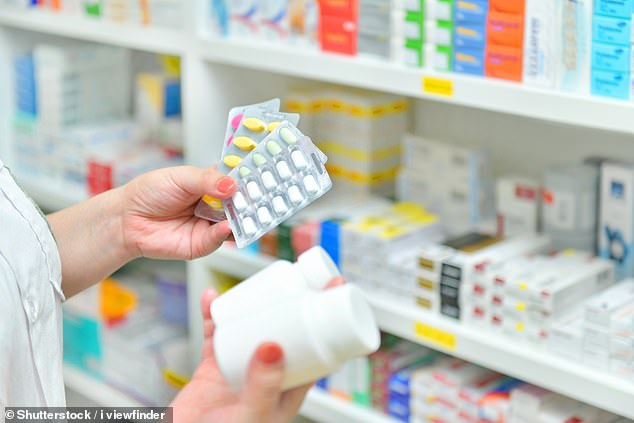 The answer starkly exposes how England’s independent community pharmacies are being driven into bankruptcy by an NHS system that effectively financially penalises them every time they dispense a prescribed drug, particularly when shortages and price hikes send drug prices soaring

But the move threatens the very survival of his business, which he has been running since 2018.

‘I might lose £20,000 this month if the NHS refuses to acknowledge the supply problem and doesn’t reimburse me properly,’ he says.

If that were a one-off crisis, it might be forgivable. But England’s 6,600 independent pharmacies — and the customers who depend on them — are imperilled by an NHS system that continually punishes them financially for filling prescriptions for hundreds of increasingly scarce medicines.

As Dervis explains: ‘The NHS stipulates how much it will pay for us to buy a product, based on what it believes to be the price — that’s the NHS drug tariff. Then it deducts 20 per cent from that payment because it expects us to be able to negotiate a discount from the wholesalers.

‘So if the NHS stipulates that the tariff price is £1, they will actually pay us only 80p.

‘Most often we can’t get discounts. We’ve been swallowing that loss because we want to provide healthcare,’ he says.

‘But our losses really spiral when a drug on the tariff becomes scarce — if a wholesaler manages to get it, they charge highly for it.’ This problem was bad enough when supply shortages affected only between five and ten commonly prescribed drugs, as was the case a few years ago.

However, ‘some 200 medicine prices are now significantly above what the Government says they are on the tariff,’ says Suraj Shah, drug tariff and reimbursement manager at the independent chemists’ representative, the Pharmaceutical Services Negotiating Committee (PSNC). ‘That’s the highest level ever.’

When a drug price rises significantly above the tariff, the PSNC has to go to the Department of Health and Social Care and argue the case for an increase in the pharmacists’ reimbursement for that drug.

This is happening more and more, Suraj Shah told Good Health. Disruptions caused by factors such as Covid and inflationary pressures have contributed to increasing drug shortages and price rises, he says.

But the NHS system adds to the mounting crisis, he adds: ‘The drug tariff is based on data that the Department of Health and Social Care compiles each quarter, so the prices may be months out of date.’

Furthermore, the NHS wants to resist price rises as much as possible to discourage wholesalers from profiting, so it is reluctant to reimburse chemists.

Indeed, the NHS has now referred Britain’s drug wholesalers to the monopolies watchdog, the Competition and Markets Authority (CMA) over the current antibiotics pricing issue.

However, Martin Sawer, executive director of the Healthcare Distribution Association, the trade body that represents drug wholesalers, says distributors themselves have faced rocketing prices from manufacturers that — due to the surge in demand caused by the Strep A outbreak — suddenly had to ramp up production of antibiotics which, he says, ‘have been in low demand for some years’.

Stuck in the middle of this are our independent, largely family-run pharmacies.

And drug prices are not the only financial disaster they face. Their basic funding deal from the Government was last negotiated in 2015 and now fails to account for spiralling inflation, staffing costs and heating bills. This deal froze funding at £1.27 per item, but it actually costs more like £2.

Since 2015, pharmacy funding has been cut by a quarter in real terms — and around a third of independent community pharmacies face closure by 2024, an analysis by Ernst & Young shows.

This is why the Mail is campaigning for proper government funding to save our independent pharmacies, for the benefit of countless thousands of local people who are often older and vulnerable.

These pharmacists’ financial perils are only exacerbated by the wait to see if the Department of Health and Social Care will increase payments to compensate for inflated drug prices.

‘There is no assurance until the end of the month about what a new drug price will be,’ says Suraj Shah.

‘Meanwhile, pharmacists are contractually obliged to provide these medicines when a doctor prescribes them. They are having to do desperate things such as borrowing money from their own pensions just to survive.’

Dervis knows this only too well.

‘Every month we are losing money on so many drugs,’ he says. ‘For example, the heartburn drug omeprazole is on the drug tariff at £2.50 but the wholesalers are charging us up to £9 for it. The situation isn’t sustainable.

‘I’ve been coming in to work at 6.30am — we open at 9am — and working until past 10pm, seven days a week to meet the needs of patients. We can’t afford to get more staff.

‘One day recently we had more than 500 phone calls from anxious people who often were upset and even angry. GP surgeries are funded by the Government to employ receptionists and telephone lines. But we aren’t.’

‘Pharmacists are prioritising patient care by spending hours hunting down antibiotics and paying inflated prices, even when it means that the business takes a hit.

‘So the harder community pharmacists work, the more money they lose. It’s crazy.

‘We are the ones who have to look in the eyes of anxious parents and tell them we’re sorry their child’s medication isn’t available.

‘Government ministers don’t have to do that — perhaps if they did they would take more action to sort this mess out.’

Andrew Lane adds: ‘The antibiotic crisis could be the nail in the coffin for some pharmacies.

‘If the Government continues to ignore our appeals for emergency funding, it’s the NHS itself and the millions of people who rely on pharmacies for accessible healthcare who will suffer.’

A spokesman for the Department of Health and Social Care told Good Health: ‘Manufacturers currently have supplies of antibiotics available to treat Strep A. We continue to work urgently with manufacturers and wholesalers to expedite deliveries.’

Meanwhile, pharmacists such as Dervis continue their battle to survive.

‘‘All I’m looking for is not to lose thousands of pounds at a time when we have absolutely no money left in the kitty.’