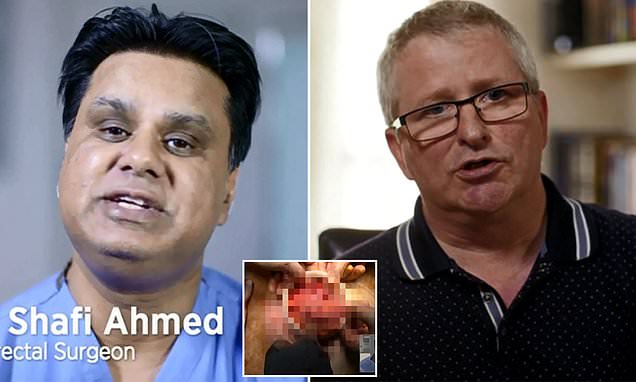 ‘His insides look like an octopus’: Viewers wowed as surgeon removes a man’s bowel for tumour removal surgery in live TV operation – and then prods the organ back in with his FINGER

Viewers of the gory Operation Live TV series were amazed once again last night when they saw a surgeon remove a man’s bowel tumour.

One of the UK’s leading colorectal surgeons, Professor Shafi Ahmed, removed part of the colon of a 51-year-old patient named Tim.

Professor Ahmed perform keyhole surgery to begin with, then the intestine was pulled out of the body through a hole in the abdomen. He later prodded the organ back into Tim using his finger.

Viewers flocked to social media, describing Tim’s guts as looking ‘like an octopus’ and marveling at the medical team’s skills.

Scroll down for video 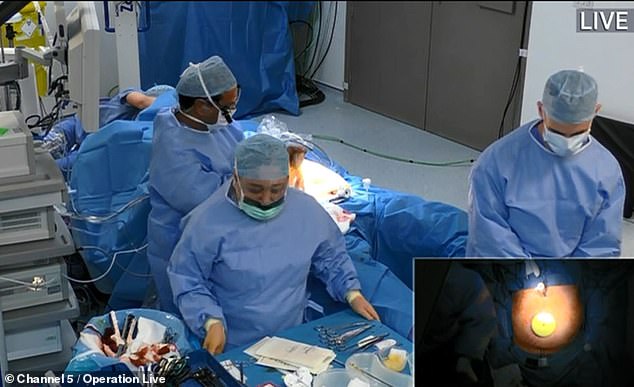 The third series of Operation Live aired last night and showed London surgeon, Professor Shafi Ahmed, perform a right hemicolectomy on a man with a tumour in his large intestine 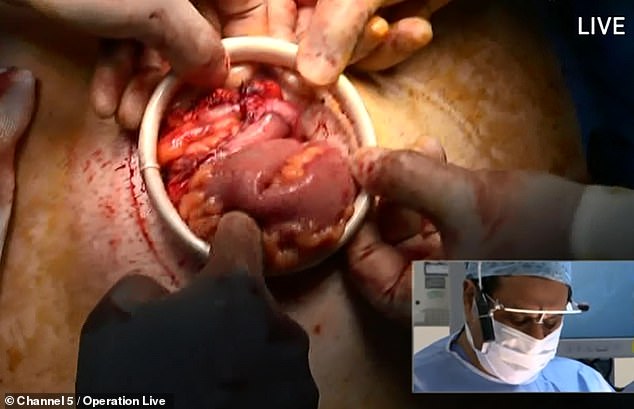 In the closing stages of the operation the bowel was pulled out of the body where it could be sewn back together, and Professor Ahmed poked it back in with his finger when it was done

Professor Ahmed and his team, working at the Royal London Hospital, performed an operation called a right hemicolectomy.

The procedure involved removing the section of Tim’s large intestine which contained a 3cm tumour, and rejoining the large and small intestines with stitches and staples.

It was not known whether Tim’s tumour was cancerous, and it was sent off to the lab for testing.

Viewers of the Channel 5 programme were amazed to see the bowel pulled outside of the body and rested on the patient’s abdomen while the operation was being finished.

Pip Holden added it was ‘incredible that he can see exactly what is what when it all looks the same to the untrained eye’. 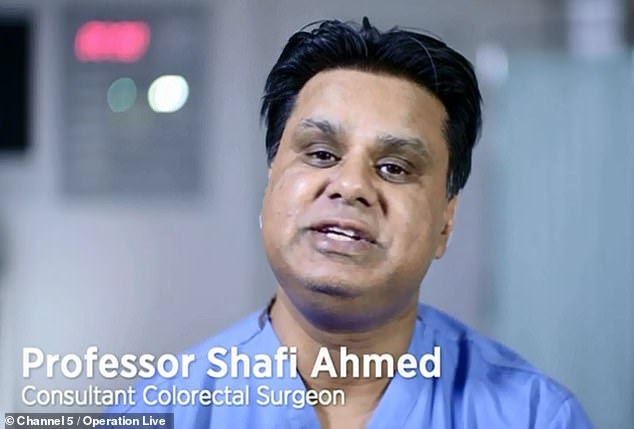 Professor Shafi Ahmed, who performed the operation, is one of the UK’s leading colorectal surgeons and works at the Royal London Hospital, part of Barths Health NHS Trust

Mark remarked on the appearance of the colon when it was pulled out of the patient’s body, saying it looked ‘like an octopus’ – the organs were shown in graphic detail on a body camera 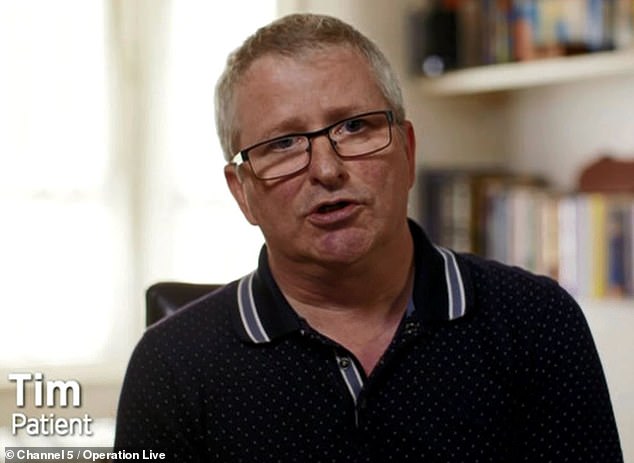 Tim, the 51-year-old patient, said he was ‘shocked’ when he was first told he had a tumour inside his colon – it is not clear whether the tumour was cancerous or not

The episode, called Removing the Tumour, was the third in the Channel 5 series which started on Tuesday night.

In a short interview before last night’s operation started, the patient, Tim, said he had been ‘shocked’ when he first found out he had a tumour in his bowel.

He said it came ‘completely out of the blue’ but he thought it was important to be open with his family about what he was going through, adding: ‘I don’t think there’s any point in hiding things.’

Professor Ahmed said there were no signs of any disease in the liver or the lungs, and the operation went successfully.

Online, Kevin Walsh said he would soon be having the same operation. He tweeted: ‘Fascinating. They chopped up and joined bits of small and large intestine, mostly by keyhole until they pulled the guts out.

Tony Carter joked: ‘I’d definitely be worried about doing a poo afterwards in case it all burst open.’

Online, Kevin Walsh said he would soon be having the same operation, tweeting ‘They are doing that to me in 3 or 4 weeks’ 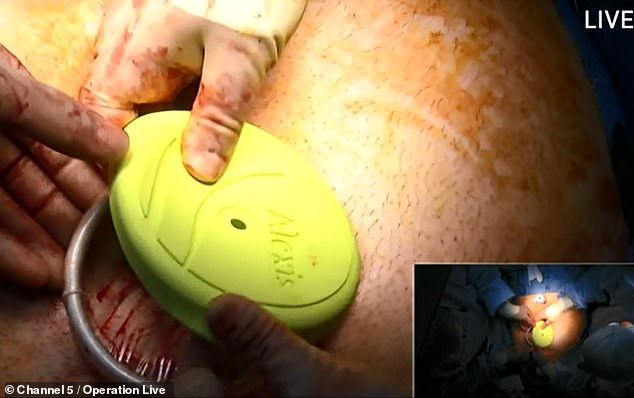 And many viewers thought the appearance of the surgical team’s equipment was entertaining, remarking on a tool used to hold open the hole through which the bowel was taken out of the body, and a lid which was put on it when the procedure was done.

Kayte Kayte described one of the implements as a Femidom – a female condom – while Pip Holden said ‘He’s temporarily a Tupperware tub!’

Most people were filled with admiration for the NHS and were sad to see the end of the fascinating show.

Andrew Mawdsley tweeted: ‘Actually quite gutted there is no more #operationlive … Amazing to see what goes on and just how dedicated each and every person in the #NHS’.

Kelly Carthy said: ‘I take my hat off to these guys, you really are in safe hands when you’re in theatre! They do an amazing job #NHS I’m PROUD of you all!’

And user Cassie added ‘I have no words for the #OperationLive series on @channel5_tv just AMAZING. How lucky are we to be able to watch it from our beds?!?!?!’

Many viewers, like Andrew Mawdsley, were filled with admiration for the NHS and were sad to see the end of the fascinating show

Kelly Carthy said she was proud of the NHS, tweeting: ‘I take my hat off to these guys, you really are in safe hands when you’re in theatre!’

And user Cassie added ‘I have no words for the #OperationLive series on @channel5_tv just AMAZING. How lucky are we to be able to watch it from our beds?!?!?!’

WHAT IS THE NHS’S BOWEL CANCER SCREENING PROGRAMME

Bowel cancer screening is offered to those aged 60 to 74 in England, Wales and Northern Ireland – but not anyone younger.

The main screening method is the faecal occult blood test (FOBT), which looks for hidden blood in stools. It is posted to people in the age range every two years — they then post a sample back.

Bowel cancer is the UK’s second biggest cancer killer – around 16,000 people die from it each year.

If caught early, at stage one, patients have a 97 per cent survival rate for at least five years, but discovered later, at stage four, this falls to just 5 per cent for men and 10 per cent for women.

Former Tory health secretary Lord Andrew Lansley launched a screening programme, called bowelscope, to detect signs of cancer for 55 year olds eight years ago. It was due to be rolled out nationally in 2016 – but fell foul of financial cuts.

Bowel cancer screening starts at 50 in Scotland. The decision to start 10 years later in the rest of the UK has been the subject of controversy.

BBC news presenter George Alagiah previously said his bowel cancer could have been caught earlier if the screening programme in England was the same as in Scotland.

He was first diagnosed four years ago, at the age of 58; last Christmas he was told that the cancer had returned and it’s now stage four.