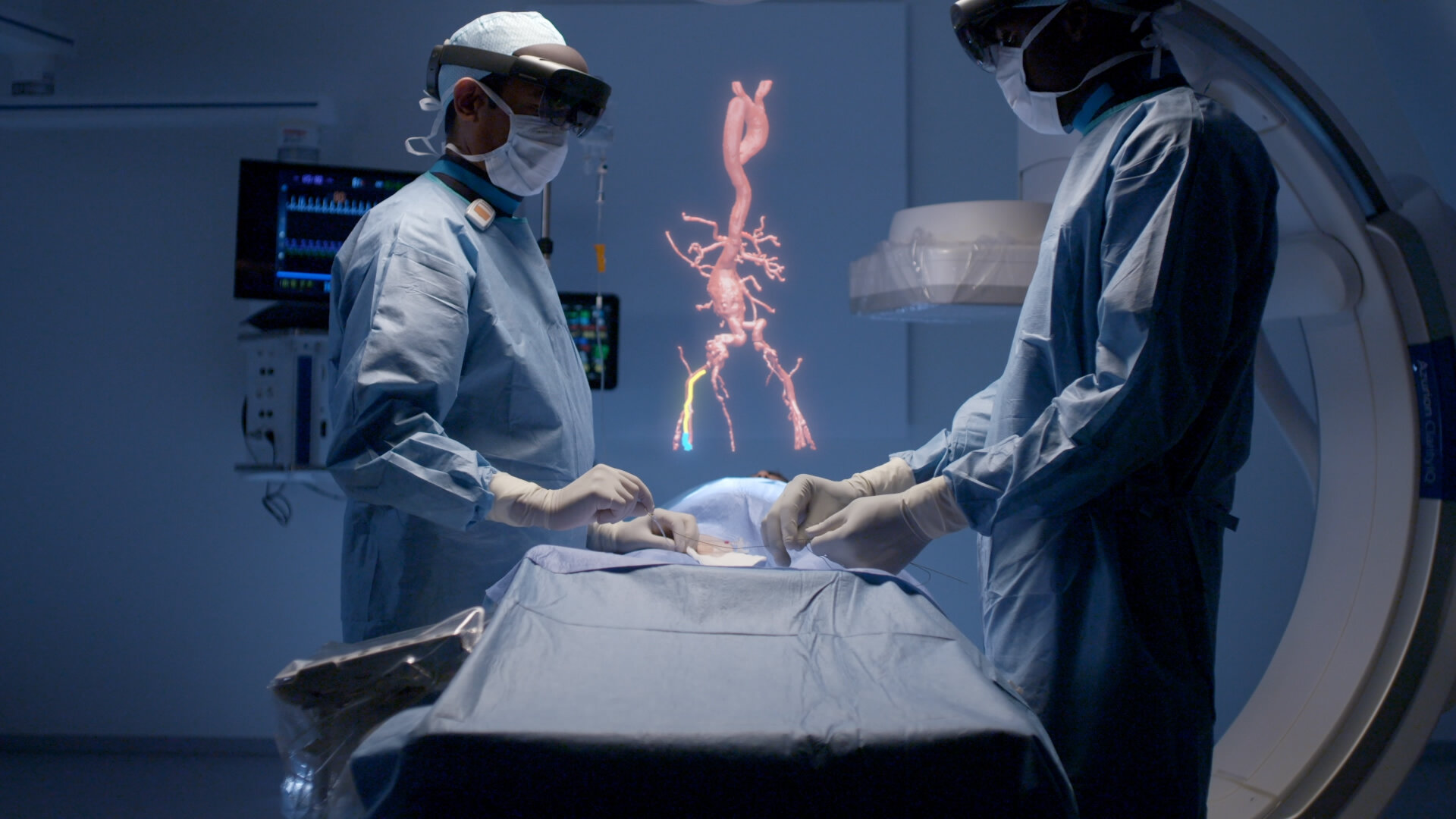 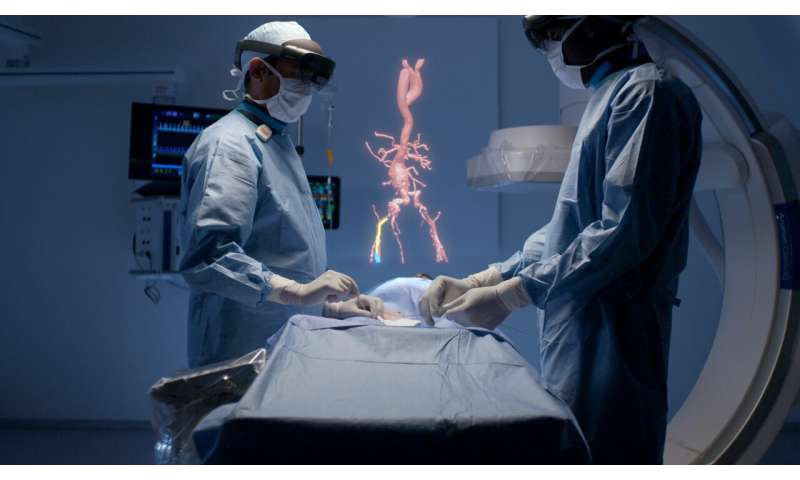 At the MWC Barcelona, one of the largest mobile events in the world, Royal Philips (NYSE: PHG, AEX: PHIA), a global leader in health technology today unveiled a unique mixed reality concept developed together with Microsoft Corp. (NASDAQ: MSFT) for the operating room of the future. Based on the state-of-the-art technologies of Philips’ industry-leading Azurion image-guided therapy platform and Microsoft’s HoloLens 2 holographic computing platform, the companies will showcase novel augmented reality applications for image-guided minimally invasive therapies.

In contrast to open surgery, minimally invasive therapies only require a small incision. Dedicated instruments such as catheters are inserted through the incision and guided to the treatment area, which can include the heart, blood vessels, brain, liver and other major organs. During minimally invasive procedures physicians cannot directly see and touch the treatment area. Instead they rely on advanced medical imaging technologies such as ultra-low dose X-ray imaging and ultrasound, as well as other navigation technologies, to see inside the patient and guide their actions. Philips is a leading provider of high tech interventional suites and hybrid operating rooms for such procedures.

The Philips and Microsoft augmented reality concept, built for HoloLens 2, brings live imaging and other sources of vital data currently displayed on large 2-D screens into a 3-D holographic augmented reality environment that can be ergonomically, easily and intuitively controlled by the physician. The concept is being used to gather further clinical insights to support the development of future commercially-available augmented reality solutions for use in image-guided procedures.

Philips is piloting HoloLens in the domain of image-guided minimally invasive procedures, during which physicians rely on live X-ray, ultrasound and other sources of information to ‘see’ inside the patient and guide their actions. Credit: Microsoft

“The transition from open surgery to image-guided procedures has driven a seismic shift in improving patient outcomes and reducing costs – not least by dramatically reducing the length of time a patient stays in a hospital after their procedure,” said Atul Gupta, MD, Chief Medical Officer for Image Guided Therapy at Philips and a practicing interventional and diagnostic radiologist. “On our Azurion platform we seamlessly integrate a range of data sources in a way that’s intuitive to understand and control. By collaborating with Microsoft and HoloLens 2 we can take it to the next level, immersing the physician in a tailored augmented reality environment. This concept allows me to see the real world superimposed with the live data and 3-D medical imagery needed to guide our precision therapy, and importantly also lets me control Azurion with voice recognition, eye tracking and advanced gestures. It’s all about keeping our focus on the patient.”

“Mixed reality is giving people new ways to interact with the digital and physical world, bringing the benefits of the digital revolution to entirely new experiences across the globe,” said Alex Kipman, Technical Fellow, AI and Mixed Reality at Microsoft. “I am thrilled to see companies in a broad range of industries achieve more using the products that we build with our partners and ecosystem. Mixed reality holds great potential in healthcare, and our collaboration with Philips shows how that potential is already beginning to be realized.”

Microsoft unveiled HoloLens 2 on 24 February at MWC Barcelona. HoloLens is a self-contained holographic computer that enables hands-free, heads-up interaction with 3-dimensional digital objects. HoloLens 2 builds on the breakthrough technology of HoloLens and is even more immersive, more comfortable and delivers more value right out of the box. 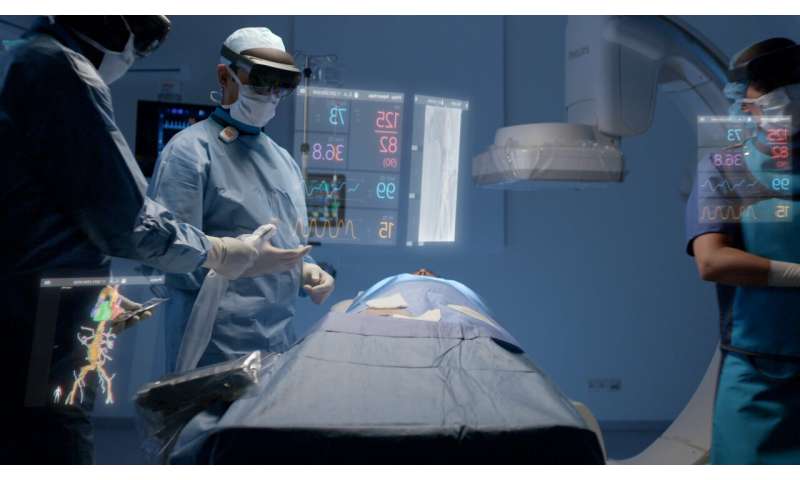 Complemented by existing and new Azure cloud services, and with built-in AI, HoloLens 2 is the ultimate intelligent edge device.

Since its global launch in February 2017, over a half-million patients have been treated in more than 80 countries using the Azurion platform, which is powered by Philips’ proprietary ConnectOS and combines technical innovations in both software and hardware. ConnectOS allows the integration of advanced digital innovations on the Azurion platform. Philips previously announced that it is developing an augmented reality solution for spine, cranial and trauma procedures. 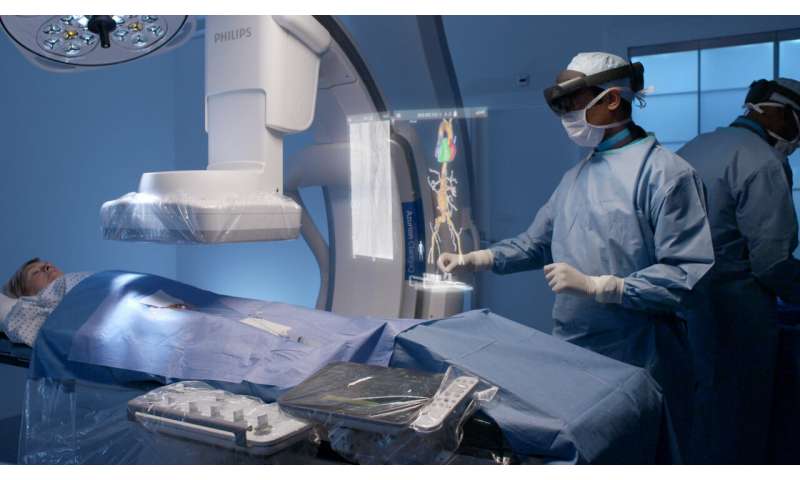