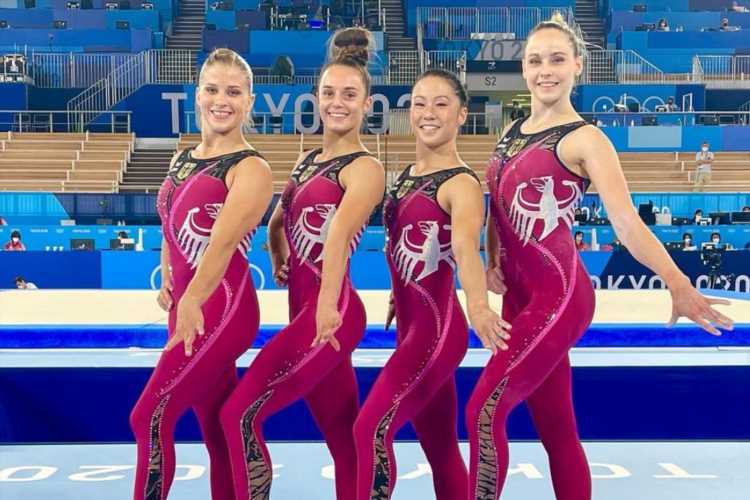 If the Tokyo 2020 Olympics have shone a spotlight on anything, it’s the sexualisation that continues to plague women’s sport. At a time where focus should be on performance and the athlete’s giving their all at the Games, we instead are learning more about the barriers female athletes have had to continually overcome, simply when it comes to their uniform when competing. After the shocking news about the Norwegian beach handball team that was fined for wearing shorts instead bikini bottoms in competition, German gymnasts broke with convention at Tokyo and debuted unitards as they took a stand against sexualisation of their sport.

Throughout the tournament, the team will now perform in the full-length uniforms that cover their legs and most of their body, instead of the sport’s customary leotards that have come to be seen as something of a tradition for female athletes. It’s a powerful decision, and one that speaks volumes of the strength of its athletes and their desire to be seen for their sport, not for the outfit they’re wearing. More importantly, the unitard does not break any of the sport’s rules.

Gymnasts Elisabeth Seitz, Kim Bui, Pauline Schaefer and Sarah Voss all gave a preview of the new outfit which they wore in practice, posting a picture to Instagram. As Schaefer wrote, “Our podium training went really well. We were able to call up our performance and introduce ourselves to the judges. Fine-tuning will be done again until Sunday and then it will finally start. How do you like our new outfit?”

Gymnastics has come under increased scrutiny in recent years, after revelations of abuse from the sport’s doctors and coaches. The German Gymnastics Federation (DTB) confirmed in April that its athletes would be taking a stand against “sexualisation in gymnastics”, adding that the issue was important in efforts to prevent sexual abuse, according to BBC reports.

“We hope gymnasts uncomfortable in the usual outfits will feel emboldened to follow our example,” says Voss. She added, “We women all want to feel good in our skin. In the sport of gymnastics it gets harder and harder as you grow out of your child’s body. As a little girl I didn’t see the tight gym outfits as such a big deal. But when puberty began, when my period came, I began feeling increasingly uncomfortable.”

As Bui said, “It should be a gymnast’s choice to wear what she (or he) feels comfortable with! Long legs leotards can also look aesthetically pleasing!”

For more of our Olympic coverage, read the stories below.

5 Of The Greatest Champion Mums In Olympic History