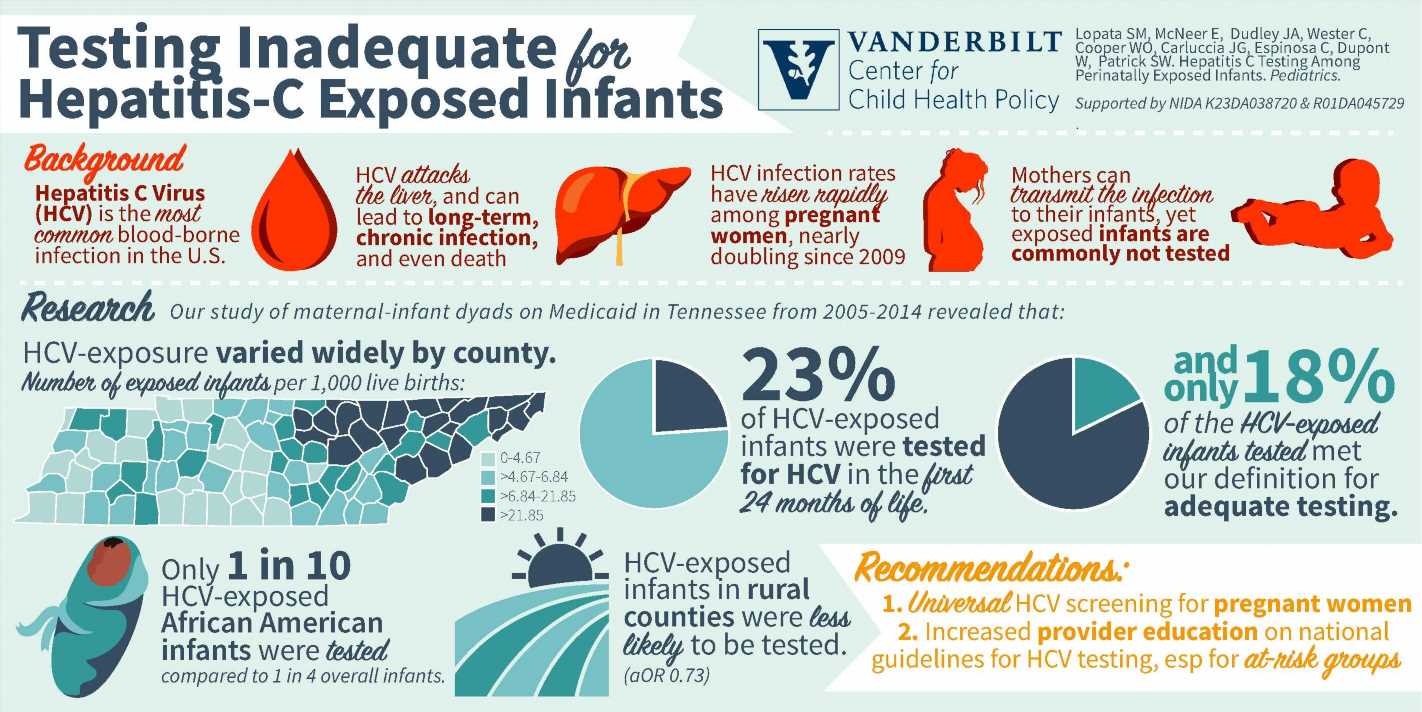 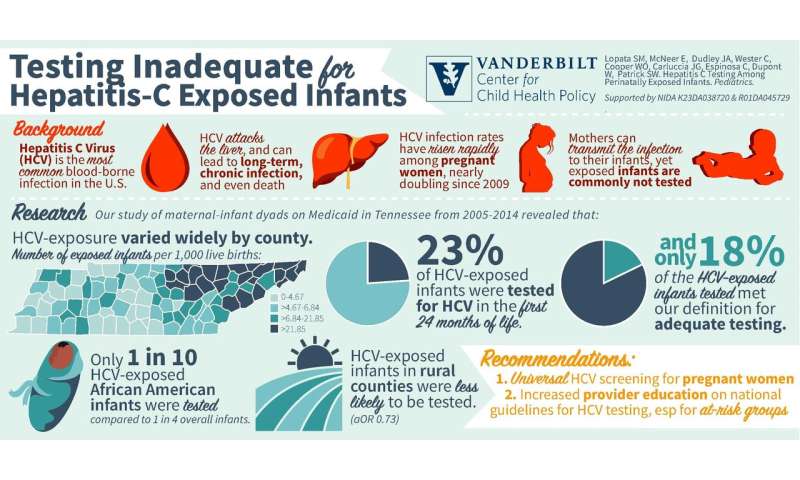 Most Tennessee infants exposed to hepatitis C at birth are not later tested to see if they acquired the virus, according to a study by researchers at Monroe Carell Jr. Children’s Hospital at Vanderbilt and the Vanderbilt Center for Child Health Policy.

Over the past few years, hepatitis C virus rates among pregnant women, likely a consequence of the country’s opioid crisis, have grown substantially.

“The increase has largely gone unnoticed,” said lead investigator Susan Lopata, MD, assistant professor of Pediatrics at Children’s Hospital. “Given that the most common mode of transmission in the pediatric population is vertical transmission—from mom to baby during pregnancy or during delivery—the rising rates of hepatitis C among pregnant women signifies an emerging public health threat to children.”

The findings, published in Pediatrics, are a result of a retrospective, cohort study that looked at infants enrolled in the Tennessee Medicaid program. Using data from birth certificates and hospital/doctor billing, investigators reviewed information from more than 4,000 subjects who were exposed to the virus during a 10-year period.

The results were disheartening.

“We wanted to see if children were being adequately tested per national guidelines and to see if there were factors associated with the differences in testing rates,” said Lopata. “The guidelines call for hepatitis C-exposed infants to be tested at either 2 months old or at 18 months old. The gold standard is at 18 months.”

According to study results for Tennessee:

“Many children were being missed or not adequately tested according to the medical guidelines,” Lopata said. “We believe that by the time a child reaches 18 months of age, pediatricians aren’t thinking about perinatal-acquired infections. They are looking at development milestones.”

The focus of the study, funded by the National Institutes on Drug Abuse, was to see if children exposed to the virus either during pregnancy or during delivery received appropriate testing and to determine if hospital- and patient-level factors affected testing.

Stephen Patrick, MD, MPH, MS, director of the Center for Child Health Policy at Vanderbilt University Medical Center and senior author of the paper, said as the opioid crisis continues to spread, affecting more women and infants, there needs to be more focus on the complications of the opioid crisis, like hepatitis C.

“There’s an urgent need to develop public health approaches to ensure we are treating women for hepatitis C infections before pregnancy, identifying infected women in pregnancy and ensuring all exposed infants are appropriately monitored,” said Patrick, associate professor of Pediatrics and Health Policy.

Lopata’s interest in determining testing rates came after her interaction with a former patient, whose mother had opioid use disorder and hepatitis C, the most common cause of liver disease. The then-3-year-old was jaundiced, had hepatitis C and needed a liver transplant.

“Despite the fact that the baby was diagnosed with neonatal abstinence syndrome (NAS), an opioid withdrawal syndrome in newborns, his hepatitis C exposure wasn’t identified. He fell through the cracks. Seeing him in liver failure made me want to pursue this area of research.”

“I believe people will be shocked to discover that we are not doing a good job testing children,” Lopata said. “There is no universal screening for hepatitis C in pregnancy. Perhaps someday this would be an option to better identify moms and babies exposed so that down the road we can test them when appropriate.