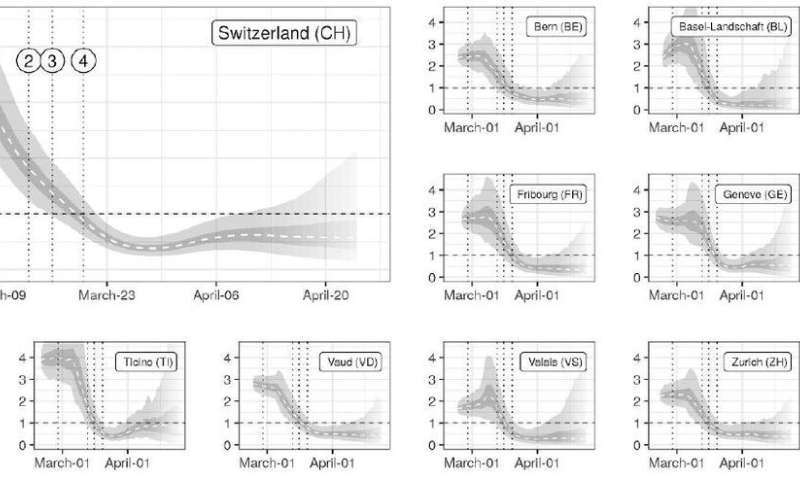 EPFL researchers have modeled the effects of measures taken in the country to slow the spread of coronavirus. According to their estimates, the contamination rate has fallen by between 53% and 92%, depending on the canton, and people’s movements have been reduced by 30% to 80%.

Have the Swiss government’s lockdown measures been effective in stemming the pandemic? That’s the question a team of EPFL researchers set out to answer by analyzing data dating back to 28 February, the day the Swiss government banned groupings of over 1,000 people. This initial restriction was followed by a series of others that culminated in a ban on groupings of over five people, introduced on 20 March. “It’s essential for policymakers to be able to quantify how effective these measures are in slowing the spread of SARS-CoV-2, so that they can make the right decisions for both this pandemic and future ones,” says Jacques Fellay, the study’s coauthor. Fellay, a medical researcher at EPFL’s School of Life Sciences, also sits on the Swiss federal government’s COVID-19 scientific advisory board. The team’s findings have just been published in Swiss Medical Weekly.

Their method involves using an epidemiological model to calculate the virus’s “basic reproduction number,” or R0, over the course of the pandemic on both a national and cantonal level. The model uses detailed data on over 1,000 hospitalized COVID-19 patients in Vaud as well as publicly available information on COVID-19 hospitalizations and deaths in Switzerland. “We were fortunate to have access to key data such as the length of hospital stays—including in intensive care units—which isn’t always the case in this type of study. That allowed us to tailor our model to the specific clinical conditions in Switzerland,” says Joseph Lemaitre, a Ph.D. student at EPFL’s Laboratory of Ecohydrology and the study’s lead author. 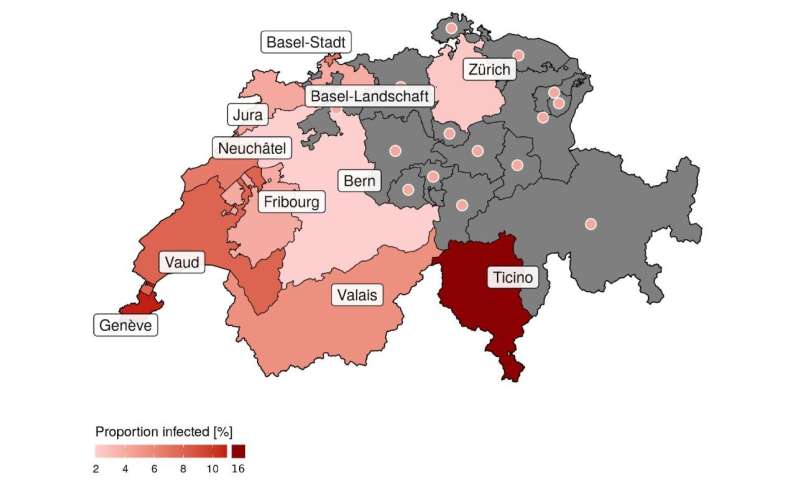 The research team found that on a national level, R0 fell from 2.8 at the start of the pandemic to 0.4 in early April—a decrease of 86%. Looking at individual cantons, R0 dropped between 53% (in Jura) and 92% (in Basel-Stadt). The reduction in people’s movements was measured using smartphone data: trips for work, shopping and recreational activities fell between 50% and 75% on a national level and between 30% and 80% on a cantonal level. The researchers also found a strong correlation between a reduction in people’s movements and a decrease in R0, even though this rate actually started declining a few days before people began changing their habits.

According to the study, R0 began falling on 6 March—at least one week before Swiss schools were officially closed. The Swiss Federal Office of Public Health rolled out its COVID-19 information campaign on 28 February and updated it on 2 March with a heightened focus on personal hygiene measures. This campaign raised awareness about the gravity of the situation and prompted people to follow the government’s personal hygiene and social distancing recommendations. As a result, R0 started falling before the recommendations became mandatory. “R0 was already close to 1 when the government banned groupings of more than five people and asked that everyone stay at home. Of course, that may be partly due to the fact that people saw those requirements coming and changed their behavior accordingly—by adopting social distancing measures, for example—even before the official announcement, as suggested by data on internet searches,” says Lemaitre.

The researchers’ model indicates that 3.9% of the Swiss population has been infected by the new coronavirus (as of 24 April), with cantonal rates ranging from 1.9% in Bern to 16% in Ticino.