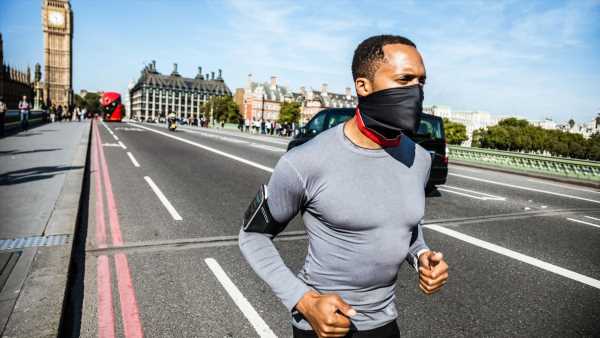 Face masks play a critical role in helping to curb the spread of the novel coronavirus, and could save tens of thousands of lives in the U.S. if everyone wore them in public, experts have said.

Yes, some face masks are more protective than others. But that doesn’t mean wearing neck gaiters — stretchy pieces of fabric that people, especially runners, pull up to cover their nose and mouth — is worse than wearing no masks at all, as some recent news articles have suggested.

These news articles were based on a study published Aug. 7 in the journal Science Advances, in which researchers tested a novel method for evaluating the effectiveness of face masks. In other words, it was a study conducted to test a methodology. However, the researchers did explore some mask effectiveness in a “proof-of-principle” test, to evaluate whether they could use this particular method to measure mask effectiveness. To do that, they had a handful of participants try out multiple types of masks.

“The mask tests performed here … should serve only as a demonstration,” the authors wrote in the paper. “Inter-subject variations are to be expected, for example due to difference in physiology, mask fit, head position, speech pattern, and such.”

In this setup, a person wears a face mask and speaks in the direction of a laser beam set up inside a box that’s expanded to be a sheet of light — and the droplets that come out of their mouths and through the masks scatter light, which is detected using a cellphone camera. A simple computer algorithm counts the droplets in the recorded video. The researchers demonstrated their method with 15 different face masks and face coverings; one participant tried out all the masks and four tried a subset of the masks. During each trial, the researchers had the participants say “stay healthy, people,” five times, and measured the number of droplets they emitted.

The authors found that the number of droplets that escaped through the masks varied greatly. They did not see “any appreciable droplet” emission from the N95 respirator, for example, though those should typically be reserved for health care workers, co-author Martin Fischer, a chemist and physicist at Duke University in North Carolina, said at a news briefing today (Aug. 13). The Duke team also tested a range of cotton masks and found that they blocked about 80% of the droplets coming out of the mouth, Fischer said.

However, in this proof-of-principle setup, some masks seemed to allow more droplets through than others. The gaiter mask produced 10% more droplets than when the person did not wear a mask, according to the study. The researchers hypothesize that this could be because the gaiter mask split the large droplets from the person’s mouth into smaller droplets, which increased their count. That is “somewhat concerning,” as little droplets can hover in the air for longer and be easily carried away by air currents, Fischer said.

That being said, the gaiter was only tested on a single person, making it likely that differences between individual speakers would overwhelm any difference between masks that they noted. What’s more, the researchers tested a single neck gaiter (one that was very thin and made up of a mix of 8% spandex and 92% polyester).

The public should “absolutely not” use this as evidence that neck gaiters are worse than wearing no mask at all, Fischer said. “We tested one mask because we just had that mask lying around … there are plenty of other gaiters out there,” some that could be more protective, he said. Even the way people wear them can change how protective they are, he added.

Some experts aren’t convinced that this particular neck gaiter created more particles in the first place.

“It’s unclear to me whether they actually measured respiratory droplets,” said William Ristenpart, a professor of chemical engineering at the University of California, Davis who was not part of the study. Instead, the Duke team may have measured dustlike particles of fabric that came from the masks.  “Research from my group in peer review right now indicates that some fabrics shed substantial numbers of particulates that confound mask efficacy measurements,” Ristenpart told Live Science.

There’s still much we don’t know about face mask efficiency, and more tests are needed to pin that down, said study senior author Dr. Eric Westman, an associate professor of medicine at Duke University. Though this study doesn’t prove anything about face masks such as gaiters, people should take a “pause” if they are using flimsy face coverings, such as a “one-layer, spandex, polyester stretchy fabric that you can easily breathe through and blow out a candle through,” Westman told Live Science. Those types of masks will likely not be very protective, while a double-layered mask, for example, might be better, he noted.

—20 of the worst epidemics and pandemics in history

Another study, published June 30 in the journal Physics of Fluids used a different method to evaluate the effectiveness of non-medical masks: a masked or unmasked mannequin connected to a fog machined. This team found that without a mask, droplets could travel up to 12 feet (3.7 meters) from the mannequin, but with a mask that distance dropped significantly,  according to a previous Live Science report.

These researchers found that a stitched cotton mask that fit snugly and had multiple layers reduced the spread the most, but a cone-style mask also worked well. A single-layer bandana (made from an elastic T-shirt material) and a folded handkerchief were not as effective. The Centers for Disease Control and Prevention (CDC) recently updated their guidance to warn against using masks with exhalation valves, which might protect the wearer of the mask, but not others, according to another Live Science report.

There are still more questions than answers, but one of the major takeaways from this new study highlights that, “just speaking can potentially spread this [virus] to other people, I don’t have to yell, I don’t have to sneeze or cough,” Westman said.