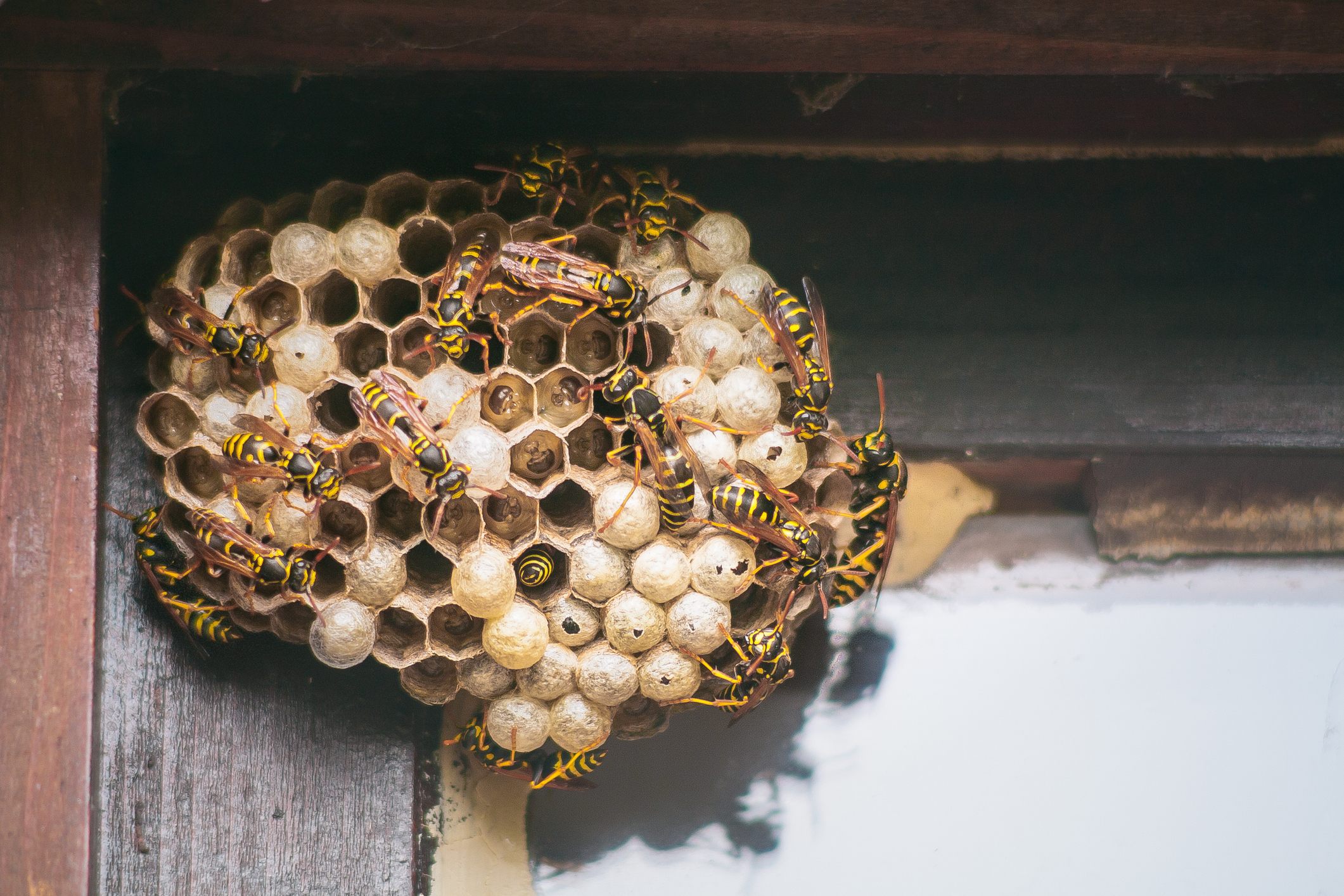 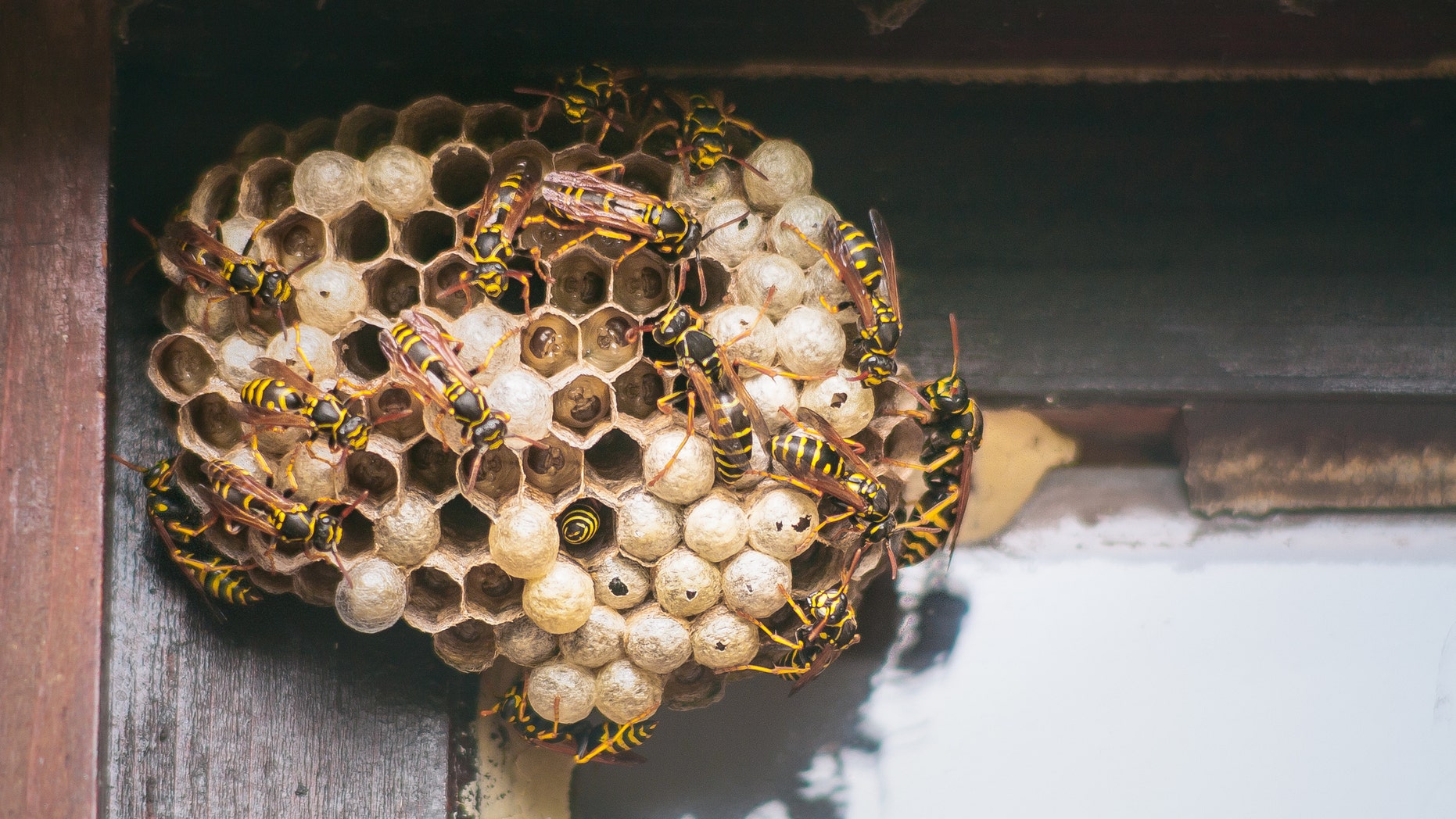 Wasps in action working on building their nest in the corner of house window. Live nest with cacoons, larvae and lot of wasps.

A former soldier died after being stung by a wasp during a routine call-out in his new job as a pest controller, an inquest heard.

Married Lee Darker, 48, had an anaphylactic shock and was pronounced dead after being found slumped in the passenger seat of his van on Sept. 17. The sting triggered an allergic reaction known as anaphylaxis, an inquest in Harrogate, North Yorkshire, heard on Wednesday.

His death came two weeks after he was stung eight times by a wasp during a separate call out which was treated with cream although he didn't suffer from any symptoms. An inquest heard Darker, who worked as a pest control technician, did not have any known allergies.

Darker, originally from Mansfield, Nottinghamshire, had started working at Mitie Pest Control in Sept. 2017. He had previously been in the British army as a soldier in the Royal Lancers for 22 years before leaving in 2010.

The former soldier was called out to royal army medical corp sergeant, Colin Lowe’s address at Catterick Garrison following reports of a wasps' nest in his garage.

Darker, who lived in Darlington, County Durham and was stepfather to three children, successfully removed the nest but complained he had been stung twice. It’s not known whether he was wearing standard protective issue clothing but was "meticulous" when following rules, an inquest heard.

“Back in September 2018, I was residing at Catterick Garrison in an army property," Lowe said in a read statement. “In March of this year [2018] I found a nest of bees and called a company to deal with. A male came round and dealt with the situation. In September, I identified there was a wasps' nest in the garage and called the same company to deal with it. The same man arrived to carry out the work."

“He was directed to the garage and the nest was identified. After that, he was left to get on with the work," he said. “I cannot say nor can my mother-in-law if he was wearing any protective clothing during the work. After he completed the work I spoke with him and he mentioned the nest had been removed but did say he had been stung twice. I inquired whether he was allergic to wasp stings and he told me he wasn’t."

"He did inform me he had been stung eight times a few weeks [earlier] on another job," he said. "At the time of speaking with him, he seemed fine. I returned to work and then received a telephone call from my mother-in-law telling me she had gone out to the garage and noticed the man’s work van still parked outside. She went up to the van and found him unresponsive and slumped in the passenger’s seat. I drove home quickly to find my mother in law attempting first aid to the man.”

Toxicology testing found a markedly elevated mast cell tryptase level – an increase in a released enzyme – in the blood in keeping with anaphylactic shock.

In a read statement, his wife of 20 years Barbara Darker said: “He was a fit and healthy person and led an active lifestyle. He was stung two weeks prior to his death and I got him some cream. I was not aware of any allergies.”

Quality health safety and environment manager, Andrew Lowicki said: “Mr. Darker was employed by Mitie Pest Control as a Pest Control Technician. He joined us in September 2017 as a trainee. Mitie requires its employees to complete a health questionnaire before starting work. On that form, he is asked various questions about his health including whether or not he had any allergies. He stated on that questionnaire that he did not."

“As a pest control technician Mr. Darker would have been required to attend a variety of properties," Lowicki said. “A few weeks prior he had a conversation with his line manager informing him that he had been stung.”

Senior coroner for the western area of North Yorkshire, Robert Turnbull recorded a conclusion of misadventure.

“On September 17, Mr. Darker attended an address in Catterick Garrison to remove a wasps nest," he said. “He completed the work but thought he had been stung a couple of times. He was later found deceased in his van outside the address. It’s a tragic outcome. He died as a result of anaphylactic shock. He was going about his business and died not anticipating this would happen.”

“He was the kindest man and would not harm a fly," his wife said after the inquest. "Everyone loved him. This was the last thing you thought would have happened, especially considering his background in the army. Lee was not aware of any potential allergies he may have had."

“He went on various tours in conflict areas over the time he spent serving in the army. His total years serving was 22 years," she said. “His tragic death has affected all of us in a most traumatic way as we were a very close family.”