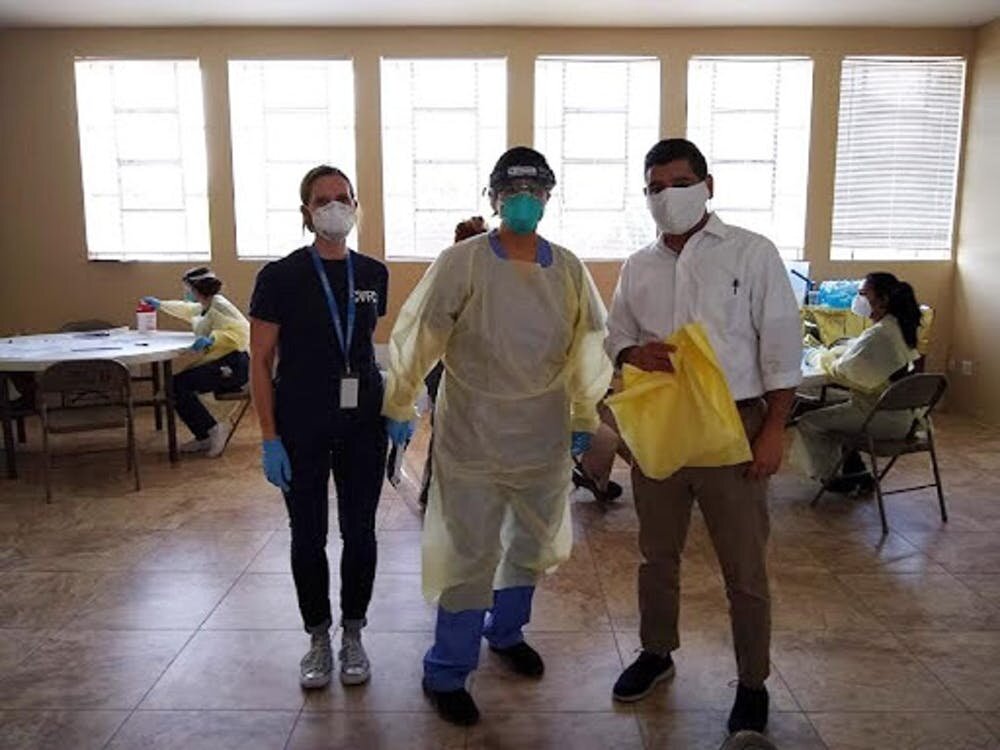 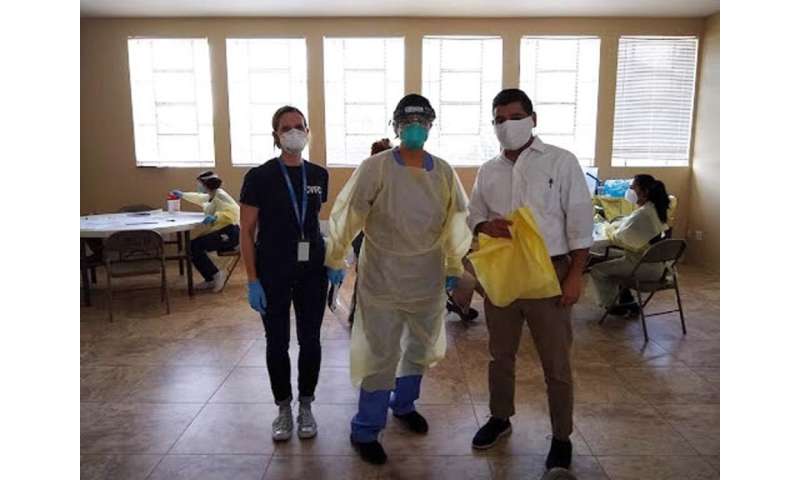 “Doctora,” a community health worker yelled from across the room. “People are lined up along the fence. Under the sun. Do we have water for them?”

I was standing in the middle of an air-conditioned room in April at a COVID-19 testing site for Latino farmworkers and their families in the eastern part of Southern California’s Coachella Valley. Outside was an ever-increasing line of symptomatic patients, individuals who either reported having a cough, fever or difficulty breathing, or who had been in contact with someone with the virus in the past two weeks. They were all waiting to get tested.

In the days before, a team of promotoras—trusted community leaders with expertise in community organizing who act as connectors to the community—had fielded call after call from concerned community members. The community members were calling about their eligibility to get tested and whether Social Security numbers and health care insurance coverage would be required. Some farmworkers shared that they couldn’t return to work without getting the test and producing evidence that they were COVID-free to their farm managers. Often ineligible for employment benefits, loss of employment can comprise their ability to survive.

As an anthropologist at the University of California, Riverside, I have a doctorate of anthropology not medicine. So I never imagined myself as “Doctora Ana,” serving on the front lines of a global pandemic and leading efforts to disseminate public health information and set up COVID-19 testing sites for essential workers. But, when I was asked in April to lead a team of medical students and promotoras in COVID-19 testing, I was ready, thanks to a conversation I had three years prior that inspired me to think about research differently.

I remember vividly the first time I met Conchita, a known advocate for her Purépecha community, an indigenous group from the Mexican state of Michoacán. I had been looking for a trusted member of the community with whom I could partner to carry out a project on health care access among Latinos in farm-working communities in Southern California. Through an existing partnership with a community-based organization serving the Eastern Valley, I had been put in touch with Conchita.

I had traveled nearly 100 miles from the University of California, Riverside School of Medicine, to her home in the eastern Coachella Valley. When I arrived, Conchita was sitting outside waiting for me and invited me to sit down under the shade of her carport. It was spring in the desert, and the sun shone brightly. I was anxious. I feared my broken Spanish and the community I represented, the academy, would create barriers to our communication. I worried that she, like so many from indigenous communities, might mistrust research.

As an anthropologist conducting community-based participatory research, the voice of the community guides my work—from the development of research questions and study design to data analysis, interpretation and use of data. My approach is to place the voice of the community at the center of research and create in collaboration with community members meaningful evidence for public health advocacy. While this looks different for each community, in the Eastern Valley, this approach informed the design and implementation of a free clinic.

The Eastern Valley is a 45-mile long rift valley bounded by mountain chains and one of the richest agricultural regions in the world. It is also one of the most impoverished areas of California and home to a large undocumented and underinsured foreign-born Latino population living in poverty and working in the fields. About a third are migrant farmworkers. 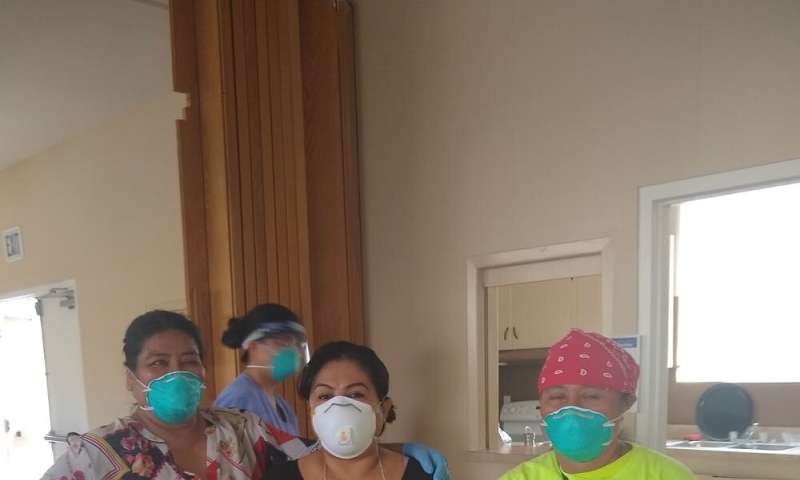 The area is also home to the largest Purépecha community in the United States. Many from this community live in rundown trailer parks on Native American lands in the Eastern Valley. While these lands protect the residents from local border patrol agents, it also sets them up for abuses from landowners. Over the years, outside entities such as federal judges have filed lawsuits to shut down trailer parks with makeshift infrastructures that they thought presented extreme public health risks but that were home for the workers. Thus, among the immigrants in this region, there is a general mistrust of outsiders, including researchers, who have flown in and out, taking information from them but never sharing the results.

My biggest concern that hot spring day with Conchita was: Would I reproduce this injustice?

Our conversation was both a “meet-and-greet” and partnership negotiation. We discussed the research at hand, the work involved and the role of the community investigator in engaging community members in the study. Conchita listened attentively and asked questions. As we neared the end of the conversation, it was unclear whether we would move forward. Then, with directness, she laid out her terms for partnership. She agreed to partner on the research, but only if study findings were used to directly benefit the community.

Fast forward a couple years. The research inspired Global Health at Home ([email protected]), a student-led effort to provide free health care to underserved and vulnerable populations in rural farmworking communities in the Eastern Valley. At the core of this infrastructure are promotoras who share information throughout their networks and help people gain access to free health care services via pop-up or mobile clinics in safe spaces in the Eastern Valley.

The students, bilingual UCR medical and pre-med students and California Baptist physician assistant students, refer to the clinic, which is held the third Saturday of every month, as the Coachella Valley Free Clinic. For the past year, I have supervised this team of students and promotoras on the design, implementation and delivery of free health care services based on our study’s findings that fear of deportation and limited access to bilingual providers prevent many foreign-born Latinos from seeking and getting health care.

It was this team who saw the need to provide COVID-19 information and how to prevent its spread in both Spanish and Purépecha, the primary languages of our patients. Our outreach efforts have focused on communities in the Eastern Valley with particular attention to the Oasis trailer park, located in the community of Thermal, where we hold our pop-up clinic.

Our patients are essential workers. They must decide every morning whether they will leave their home to work the fields to provide for their families and the nation. They make this decision in the context of increasing cases of COVID-19 in the country and the very communities in which they live. Riverside County, where the Coachella Valley sits, has the second-highest number of coronavirus cases and deaths in the state. In Thermal, the infection rate is five times higher than any other city or unincorporated community in the valley.

The infrastructure and network of [email protected] enabled us to rapidly organize and engage the community in COVID-19 testing clinics. Through a grant to one of our partners, Coachella Valley Volunteers in Medicine, and an anonymous donation, 200 tests were made available to farm workers and their families in the valley, enabling us to hold the first two clinics in May. Within days, the network of promotoras had spread news of the testing site through their social networks, and student leaders organized themselves to assist at the clinics. In May, we held our first two clinics. We have since been preparing for additional clinics and handing out public health material.