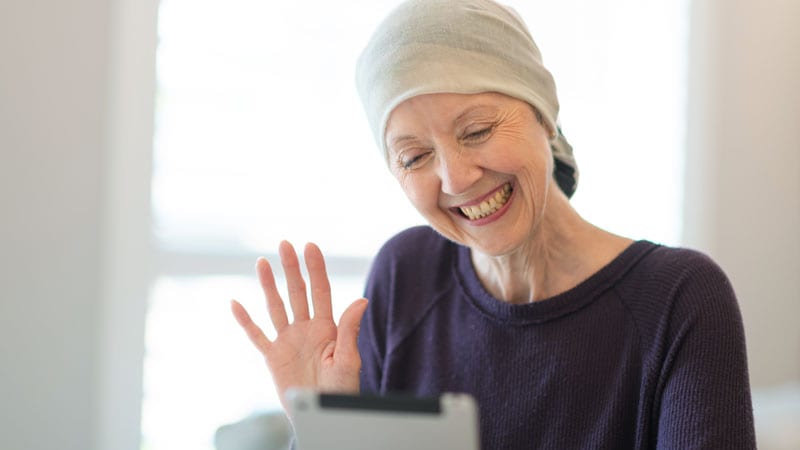 A remote monitoring system was highly effective in managing symptoms and improving quality of life among patients with cancer who were receiving chemotherapy, say researchers reporting the first clinical trial of the new approach.

The study tested the Advanced Symptom Management System (ASyMS) for patients with various cancer types who were undergoing treatment at cancer centers in several European countries. The study primarily focused on patients who were being treated with curative intent.

The 24-hour monitoring system optimized symptom management in a manner safe, secure, and in “real time,” the team reports. This is particularly relevant during the COVID-19 pandemic, they note.

“Our findings suggest that an evidence based remote monitoring intervention, such as ASyMS, has potential for implementation into routine care to make a meaningful difference to people with cancer,” the authors conclude.

The findings were published online in The BMJ.

The results show that “ASyMS can be implemented across multiple countries within diverse healthcare systems,” commented lead author Roma Maguire, PhD, a professor of digital health and care at the University of Strathclyde, in Glasgow, Scotland, and director of the Health and Care Futures initiative.

So far, the system has only been used in clinical research studies, but “our findings do suggest that it is feasible to implement our system on a wider scale,” she added.

The study cohort included 829 patients with various cancers, including nonmetastatic breast cancer, colorectal cancer, Hodgkin disease, and non-Hodgkin lymphoma. The patients were receiving first-line adjuvant chemotherapy or chemotherapy for the first time in 5 years. They were recruited from 12 cancer centers in Austria, Greece, Norway, the Republic of Ireland, and the United Kingdom.

The primary outcome was symptom burden, as determined using the Memorial Symptom Assessment Scale. Secondary outcomes included health-related quality of life, as determined by results on the Functional Assessment of Cancer Therapy–General, the Supportive Care Needs Survey–Short Form, the State-Trait Anxiety Inventory–Revised, the Communication and Attitudinal Self-Efficacy scale for cancer, and the Work Limitations Questionnaire.

Patients in the intervention group completed a daily symptom questionnaire on a handheld ASyMS device, which generated alerts to healthcare professionals if any intervention was needed. The patients were also provided with advice and information on how to manage their symptoms themselves.

Overall, the investigators found that among the patients who used ASyMS, psychological and physical symptoms were significantly reduced, along with the level of distress associated with each symptom.

In addition, for the patients who used ASyMS, health-related quality-of-life scores were higher across all cycles. The authors note that the improvements in health-related quality of life are consistent with findings from recent trials of the use of remote monitoring systems in chemotherapy care. The intervention group also experienced significant improvements regarding the need for supportive care.

The incidence of adverse events was similar for the two groups, although the rate of neutropenia was higher among patients using ASyMS (n = 125; 64%) in comparison with the standard-care group ( n = 71; 36%). Three deaths occurred in each study arm. The number of planned hospital admissions was similar between the two groups (34 vs 38), as was the number of unplanned hospital admissions (120 vs 109). No ASyMS device-related incidents were reported.

The trial was funded by the European Commission and was sponsored by the University of Strathclyde. Maguire has disclosed no relevant financial relationships.