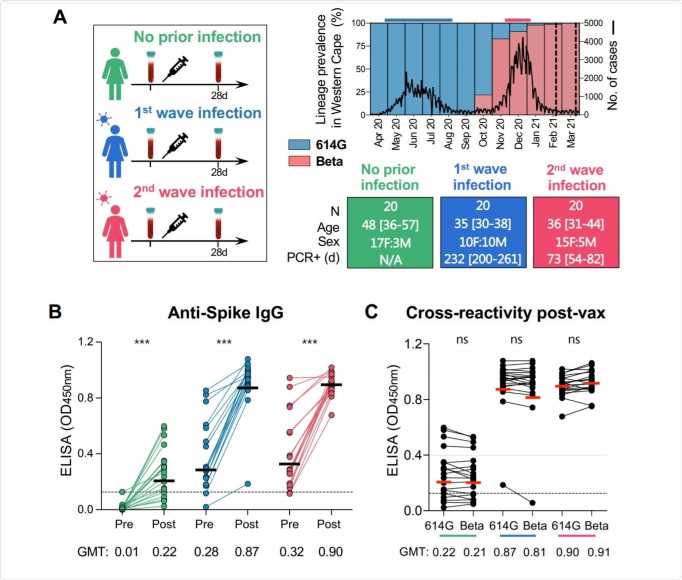 This finding becomes more important when it is supplemented by the observation that the vaccine is able to elicit a T cell response that protects against the beta (B.1.351/501Y.V2) variant of concern (VOC) of the virus, which has been reported to be resistant to neutralization by antibodies to earlier variants used in these vaccines or introduced by natural infection. 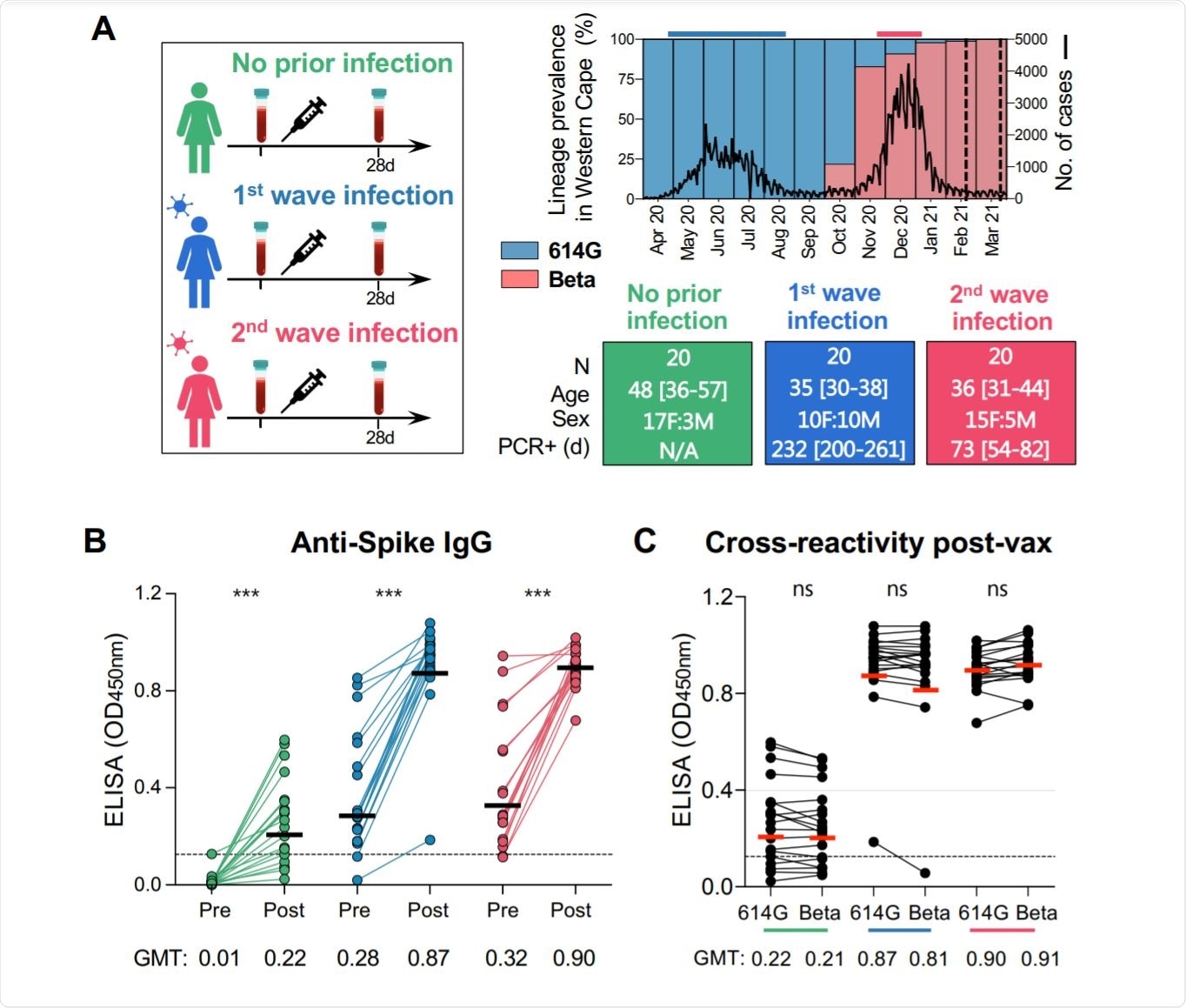 The COVID-19 pandemic has cost over four million deaths so far, among the almost 200 million documented cases. In response, vaccine development proceeded to culminate in the emergency use approval of the Pfizer vaccine, followed soon after by the Moderna vaccine.

Both these are messenger ribonucleic acid (mRNA) vaccines, encoding the spike glycoprotein of SARS-CoV-2. They required two doses each, for a complete priming-booster regimen that would ensure adequate immunity.

However, recent reports indicate that in individuals who have already been infected by the virus, a single dose boosts both binding and neutralizing antibody responses, which can protect against multiple variants. In addition to the antibody response, antibody-dependent cellular cytotoxicity (ADCC) is enhanced in this subset of vaccine recipients, along with cross-reactive T-cell responses.

A third vaccine that received approval was the Johnson and Johnson Ad26.COV2.S. Based on an adenovirus vector that would insert the SARS-CoV-2 spike protein into the host, to induce an immune response, this requires only a single dose. It is also a more affordable vaccine. Thus, the scientists say, “It represents an attractive option for the scale-up of COVID-19 vaccination in resource-limited countries.”

The Ad26.COV2.S vaccine induces slowly increasing titers of neutralizing antibodies, which also show an increase in breadth of recognition of viral antigens. Alongside, the vaccine elicits Fc effector functions and T cell responses that are key to persistent neutralizing capacity, and which also preserve their activity against VOCs.

In South Africa, the first wave of infections was caused mainly by the SARS-CoV-2 D614G variant, while the second, in February 2021, was caused by the beta VOC. Thus, this study allowed the scientists to compare the effect of the period between infection and vaccination on the humoral and cell-mediated immune response, in terms of both magnitude and breadth. Secondly, they explored the immune response when the primary infection was caused by a heterogeneous spike-bearing variant relative to the vaccine spike antigen.

What did the study find?

The researchers included 20 naïve or uninfected healthcare workers with 20 who acquired the infection during the first wave and another 20 who were infected in the second wave. In the first wave, non-beta variants were dominant, but the beta lineage in the second.

The study is published in the pre-print server medRxiv*.

Moreover, the immune response in the previously infected vaccinated groups holds good against the D614G, Beta, and Delta variants of SARS-CoV-2. Conversely, vaccination alone resulted in significantly lower titers against the beta and delta VOCs, with 85% and ~80% of samples failing to show neutralizing activity against the two, respectively.

Even though the interval between natural infection and vaccination was much longer with first-wave cases, at seven months, vs two months for the second wave, the final antibody titer was similar with both. ADCC was also similar, and both resulted in similar binding of cross-reactive antigens.

The only significant difference that was seen between the cases that occurred during the first and second waves was that cross-neutralizing activity showed variation. With first wave infections, the neutralizing activity against the beta and delta VOCs was present but at lower titers, compared to the D614G variant. With the second wave (beta VOC) infections, plasma samples showed comparable neutralizing titers against the D614G variant, but six-fold reduced titers against the delta variant.

The breadth of neutralizing antibodies after vaccination is therefore a function of the spike antigen of the infecting strain.

Fc effector responses against the D614G variant were comparable following natural infection or vaccination only. Vaccination of the previously infected groups showed enhanced responses, with ADCC being preserved for both beta and delta VOCs at similar levels as against D614G. In the vaccination-only group, a slight reduction of ADCC against the VOCs was observed.

SARS-CoV-2-specific T cells are important in reducing the severity of COVID-19, even when antibody titers are low. The T cell responses to vaccination differed from the antibody profile.

Prior to vaccination, less than one in seven individuals had CD8 T cells, during the first wave, vs one in three in the second wave. Notably, T cell responses of high magnitude were observed after vaccination of naïve as well as previously infected subjects, with the second wave infections being associated with higher responses.

Conversely, CD4 T cell responses were present in 85% and 100%, respectively, before vaccination. The increase in CD4 T cell frequencies was significant only in those with lower initial responses, that is, in the naïve group.

CD8 T cells responders made up only ~40%, 45%, and 60% of naïve, first wave, and second-wave vaccine recipients, respectively.

Many emerging variants of SARS-CoV-2 have been reported to show resistance to neutralization by antibodies induced by the earlier variants, especially the beta lineage (B.1.351). However, this study demonstrated the preservation of robust T cell immunity against this variant as well.

These results demonstrate that cross-reactive CD4 and CD8 T cell responses are generated after vaccination, regardless of prior infection.”

What are the implications?

Ad26.COV2.S vaccination following prior infection, even >6 months previously, may result in substantially enhanced protection against COVID-19.”

In areas with a high prevalence of SARS-CoV-2 antibodies, this may indicate the preferability of this vaccine, with its single-dose regimen, vs the two or more doses required with the other vaccines.

Secondly, they observed the dominance of the variant that causes the primary infection, in terms of the breadth of neutralizing antibodies induced after vaccination. Prior to vaccination, infection with the beta variant led to the neutralization of both this and the D614G variant, but not the currently dominant delta variant. Despite the use of the same vaccine, when infection was caused by the D614G lineage, both beta and delta strains were neutralized relatively less effectively.

This finding “has important implications for the design of second-generation vaccines based on variants of concern,” say the researchers.

Despite this, the presence of ADCC cross-reactivity following vaccination, independent of prior infection, indicates that these antibodies bind to non-neutralizing epitopes but effectively inhibit viral replication. Further research will show if, like natural infection, vaccination will lead to B cell maturation and increased specificity and avidity of binding, with durable responses.