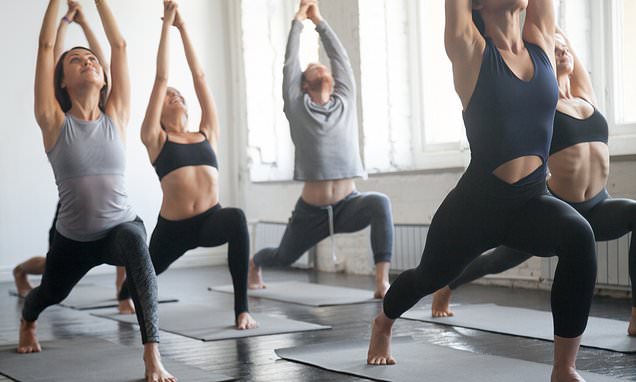 Patients who practiced the exercise in a humid room heated to 40°C (105°F) saw their blood pressure drop in a matter of weeks.

Advocates of the popular style of yoga, also known as Bikram, claim it can protect against heart disease and aid weight loss.

However, it is shrouded in controversy as critics have warned the intense heat and sweating can be too extreme. 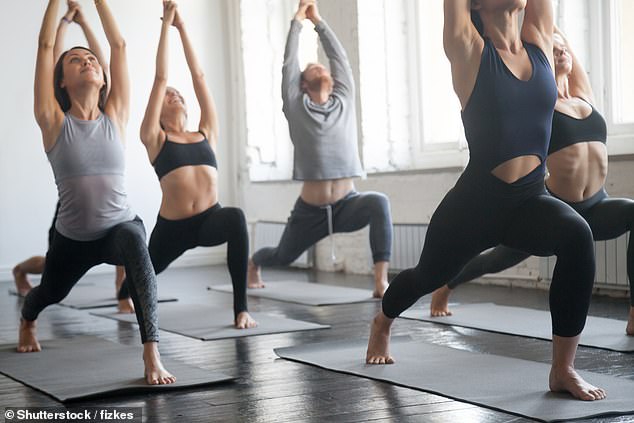 She said: ‘The results of our study start the conversation that hot yoga could be feasible and effective in terms of reducing blood pressure without medication.

‘However, larger studies need to be done before we can say with confidence that hot yoga has a positive impact on blood pressure.’

The team recruited 10 people aged between 20 and 65 years with either elevated blood pressure or stage one hypertension.

They were not taking any type of blood pressure medication and had not done vigorous exercise for at least six months before the study.

They assigned the other five to a control group of no yoga classes, according to the research presented at the American Heart Association’s Hypertension 2019 Scientific Sessions, New Orleans.

Systolic blood pressure dropped from an average 126mmHg at the study’s start to 121mmHg after 12 weeks of hot yoga.

Ideal systolic blood pressure is considered to be between 90mmHg and 120mmHg.

Average diastolic pressure also decreased from 82mmHg to 79mmHg in the hot yoga group, with an ideal level considered to be between 60mmHg and 80mmHg.

Average blood pressure did not change among those who didn’t take the hot yoga classes.

Those who took hot yoga also had lowered stress while those in the non-yoga group did not, according to the researchers.

Research into the impact of hot yoga on blood pressure is very limited, according to the study authors.

Dr Hunter said: ‘The findings are very preliminary at this point, yet they’re somewhat promising in terms of unveiling another unique way to lower blood pressure in adults without the use of medications.

‘Hot yoga is gaining popularity, and we’re even seeing other styles of yoga, like Vinyasa and power yoga, being offered in heated studios.’

The practice is loved by celebrities such as Jennifer Aniston, Madonna, Demi Moore and David Beckham and Andy Murray.

Other theories, such as that hot yoga can boost circulation and the body’s innate healing capacity, have little scientific support.

Some believe the practice of hot yoga replicates the heat and humidity of India, where yoga originated, while others look at the excessive sweating as a way to rid the body of impurities.

It’s important to take safety precautions, Dr Hunter noted, and talk to a doctor before taking up the exercise.

Hot yoga could cause dehydration and heat stroke if participants are not keeping their fluids up, and jumping into the deep end could cause injury.

Experts have also warned holding difficult poses for up to a minute can be extremely challenging for the heart and lungs.

A team at the University of Wisconsin-La Crosse found hot yoga can place pressure cause a person’s heart rate to fluctuate and their core body temperature to reach potentially dangerous levels in 2015.

The researchers said: ‘Exercising in hot and humid environments can place participants at risk for heat-related illness, especially if those individuals do not adequately hydrate before, during and after exercise.

‘Not only does it take time for the body to acclimatise to activity performed in hot and humid environments, proper hydration is crucial.’

WHAT DOES IT MEAN IF I HAVE HIGH BLOOD PRESSURE?

High blood pressure, or hypertension, rarely has noticeable symptoms. But if untreated, it increases your risk of serious problems such as heart attacks and strokes.

More than one in four adults in the UK have high blood pressure, although many won’t realise it.

Blood pressure is recorded with two numbers. The systolic pressure (higher number) is the force at which your heart pumps blood around your body.

The diastolic pressure (lower number) is the resistance to the blood flow in the blood vessels. They’re both measured in millimetres of mercury (mmHg).

As a general guide:

If your blood pressure is too high, it puts extra strain on your blood vessels, heart and other organs, such as the brain, kidneys and eyes.

Persistent high blood pressure can increase your risk of a number of serious and potentially life-threatening conditions, such as: