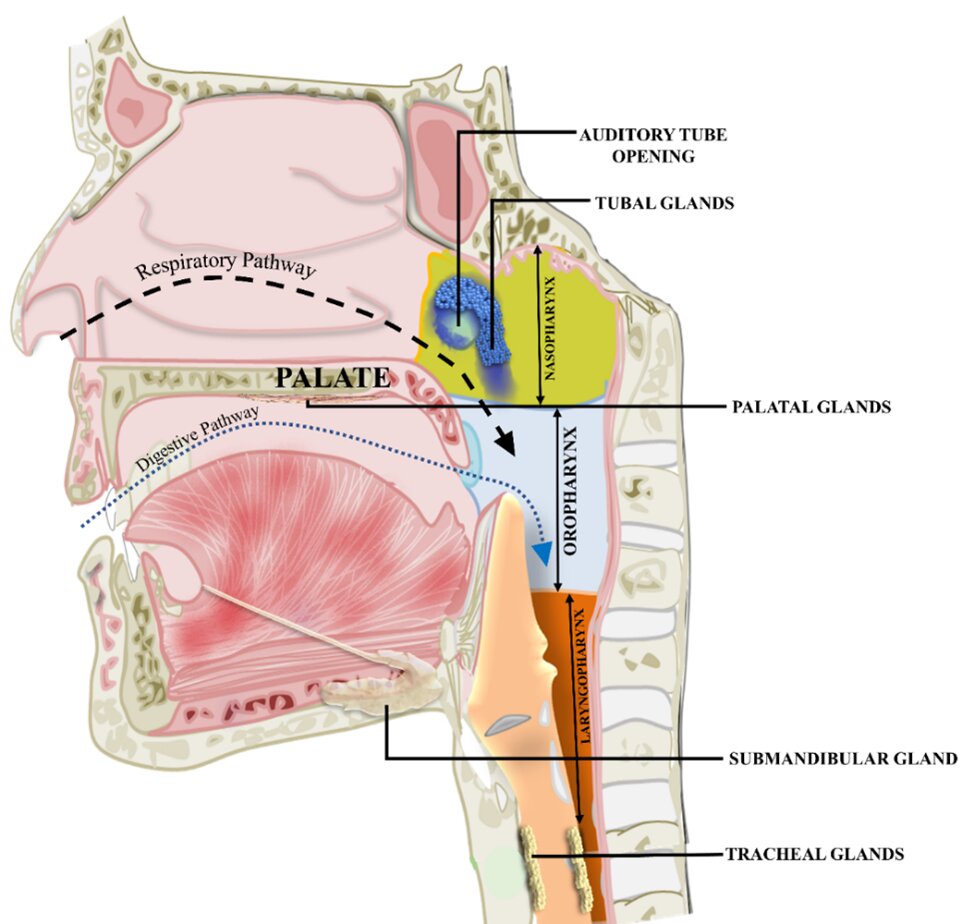 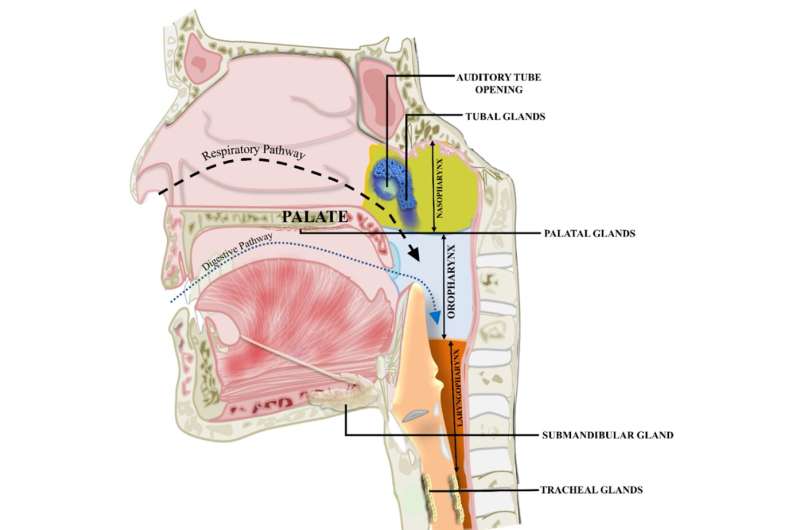 Human anatomy has been studied for centuries, and its intricacies are still not entirely understood. Discoveries, particularly microstructural details, keep adding to the known anatomy of the human body. However, discovery of a new body part or human organ raises eyebrows and invites scrutiny from the scholarly community considering the rarity of the situation.

Recently, the health science community was rocked by the claim of the discovery of a new human organ, a pair of salivary glands in the head and neck. These glands are located at the nasopharyngeal end of the auditory tube in the throat. The auditory tube connects the nasopharynx with the middle ear cavity and works as a decompression valve, balancing sound wave effects and evacuating mucosal secretions, thus facilitating optimum hearing. This tube is in continuity with the respiratory tract, a passage carrying air from the nose to the lung via the throat. The classic anatomy textbooks described the auditory tube as a component of the respiratory tract.

Further, similar to the respiratory tract, there are seromucous glands beneath the luminal mucosa of the auditory tube. These glands are more condensed at the nasopharyngeal end of the tube. The secretions from these glands help flush the middle ear secretions to the throat. (1)

A group of cancer scientists from the Netherlands, under the leadership of Matthijs H.Valstar, claimed that the seromucous collections at the nasopharyngeal end of the auditory tube, as a new pair of salivary glands, may have a significant role in radiotherapy-induced xerostomias and consequent dysphagia in patients with head and neck cancers following radiotherapy treatment. (2)

Valstar and colleagues mainly used PET/CT, a combination of positron emission tomography (PET) and computed tomography (CT), using a radioactive tracer that binds to a prostate-specific membrane antigen (PSMA). Although PSMA PET/CT is commonly used for diagnosing prostate cancer, it can easily detect the presence of seromucous glands in other tissues. The authors published their findings in Radiotherapy and Oncology. The claim of discovering a new human organ and a previously unknown body part received extensive media coverage and appraisal around the globe.

The general public viewed the claimed discovery as an outstanding achievement and remarkable addition to human anatomy knowledge. Still, scholars around the globe, more specifically anatomists, questioned the claim of discovering a body part that is already structurally and functionally known. The declaration that the structures are salivary glands was also striking, as the earlier known salivary glands are present along the mouth cavity, and their secretions effectively contribute to digestive functions. In contrast, the anatomists opined that the auditory tube glands are located very high up in the throat, toward the rear end of the nasal cavity, and fall along the respiratory passage. (4)

We were pioneers among the anatomists who voiced objections against the claims of Valstar et al. (4) Our fundamental objections were that structure and function of the glandular conglomerates are not entirely unknown as were claimed in defending a discovery. The existing literature considers them part of the respiratory tract and an integral component of the auditory tube. (1, 4-5) For classification as salivary, we considered it essential that the glands be located along the digestive tract and contribute significantly to the saliva and thus to the digestive functions. Further, these glandular conglomerates don’t present as an isolated mass and don’t have the independent blood supply, innervation or lymphatic drainage that characterize an organ.

Although Valstar et al issued a reply to the set of letters to editors sent to the original journal against their radical claims, it couldn’t sufficiently dispel our apprehensions. They clarified in the reply that they never claimed to have discovered an organ, but proposed “a potential new organ at risk of radiotherapy,” and the global media misinterpreted this. We might have no objection to accepting this clarification. However, their manuscript at large argued for considering the tubal gland conglomerates as a new organ. Notably, they issued no rectifications against the media reports, which had already spread the claim of discovering a new human organ far enough to be accepted as truth.

Interestingly, Valstar et al still insisted that they had discovered a new pair of salivary glands. They presented further evidence supporting their claim that injecting cyanine dye around the auditory tube opening in living humans reached the palatopharyngeal arch, thus the oropharynx (a part of the digestive tract).

As experts in anatomy, we were not convinced by the evidence presented by Valstar et al in the original paper nor their reply to the letters. (2-3) The tubal glands have been known for centuries through classic texts. (1, 4-5) Moreover, the early anatomical studies presented a detailed histological characterization of these glands, although they lacked immunohistological validation as these techniques were not yet established.

The contesting views and differences of opinions, including among the anatomists, necessitated that we examine the tubal glands in greater detail using the updated histological methods. We performed gross dissections of human cadavers and microscopic analyses of the obtained tissue samples using routine and special staining methods and immunohistochemical markers for myoepithelial cells and salivary amylase. Of note, amylase is a crucial enzyme in salivary secretions.

We used the control tissue samples from the known salivary glands (submandibular for major and soft palate glands for minor) and the respiratory tract (trachea) to make valid comparisons. We also performed a biochemical analysis of the salivary amylase in the tubal glandular secretions received through nasopharyngeal swab sampling from the living human volunteers.

The collective findings strongly indicate that these glands are taxonomically very different from the salivary glands: summarily, the anatomical location of the tubal glands along the respiratory tract, the presence of respiratory epithelium in the overlying mucosa, their continuity with the seromucous glands within the auditory tube, the morphological and functional similarity to the seromucous glands in the respiratory tract, and the absence of salivary amylase.

We showed that myoepithelial cells are not unique to the salivary glands but are also present in the seromucous acini of the submucosal glands in the respiratory tract; hence, their presence in tubal glands does not disqualify them from their existing taxonomic recognition. Due to a lack of capsular covering, lobular organization, ductal complexity and the conspicuous absence of salivary amylase, the tubal glands are located far from the major salivary glands.

Although the minor salivary glands bore some similarities with the tubal gland conglomerates, being predominantly mucous and lacking salivary amylase, these glands are dispersed, are present along the mouth cavity, and their collective secretion contributes significantly to the mucous content of the saliva. Of note, the mucous content of the saliva has the specific purpose of creating a slippery surface that facilitates the smooth passage of the food bolus along the digestive tract. Moreover, the minor salivary glands are not exclusively mucous but vary widely in their seromucous proportions. Exceptionally, certain minor salivary glands are serous and secrete salivary amylase, such as the von Ebner’s glands, which are present in the parenchyma of the back of the tongue.

The high anatomical location of the tubal glands in the nasopharynx makes it very unlikely that their mucous content will reach the mouth cavity and make any significant contribution to the total saliva. Valstar et al later presented supportive evidence that dye injected around the opening of the auditory tube trickled to the oropharynx could be due to the mucosal surface tension and pull of gravity, and can’t be taken as the vital operational mechanisms explaining the physiological functions of a gland.

As we categorically established that the overall evidence presented by Valstar et al (2-3) and Pushpa et al (6) was insufficiently robust to prove that tubal glands conglomerates are salivary, we suggested maintaining their existing taxonomic recognition as part of the respiratory tract and an integral component of the auditory tube. Moreover, we also expressed reservations regarding the clinical importance of the tubal glands proposed by Valstar et al (2), considering secretions of these glands are predominantly mucous.

In our view, their assumed association with physician-rated, post-treatment xerostomia and dysphagia may have other likely explanations, such as collateral damage to the other mucosal and submucosal glands in the surrounding area of the auditory tube opening in the nasopharynx. However, as our study was limited to investigating the morpho-functional details of the tubal gland conglomerates, we recommend further studies to get a clear view of the clinical importance of these glands in radiotherapy-induced xerostomia and dysphagia.

This story is part of Science X Dialog, where researchers can report findings from their published research articles. Visit this page for information about ScienceX Dialog and how to participate.