Viral emergence, transmission, and diversity can impact control efforts and outbreak dynamics. The use of genome sequencing has transitioned over the past decades from retrospective to near-real-time investigations. As evidenced during the coronavirus disease 2019 (COVID-19) pandemic, sequencing-assisted variant characterization can inform public health practice, improve disease forecasting, and aid the development of therapeutics, diagnostic assays, and vaccines. 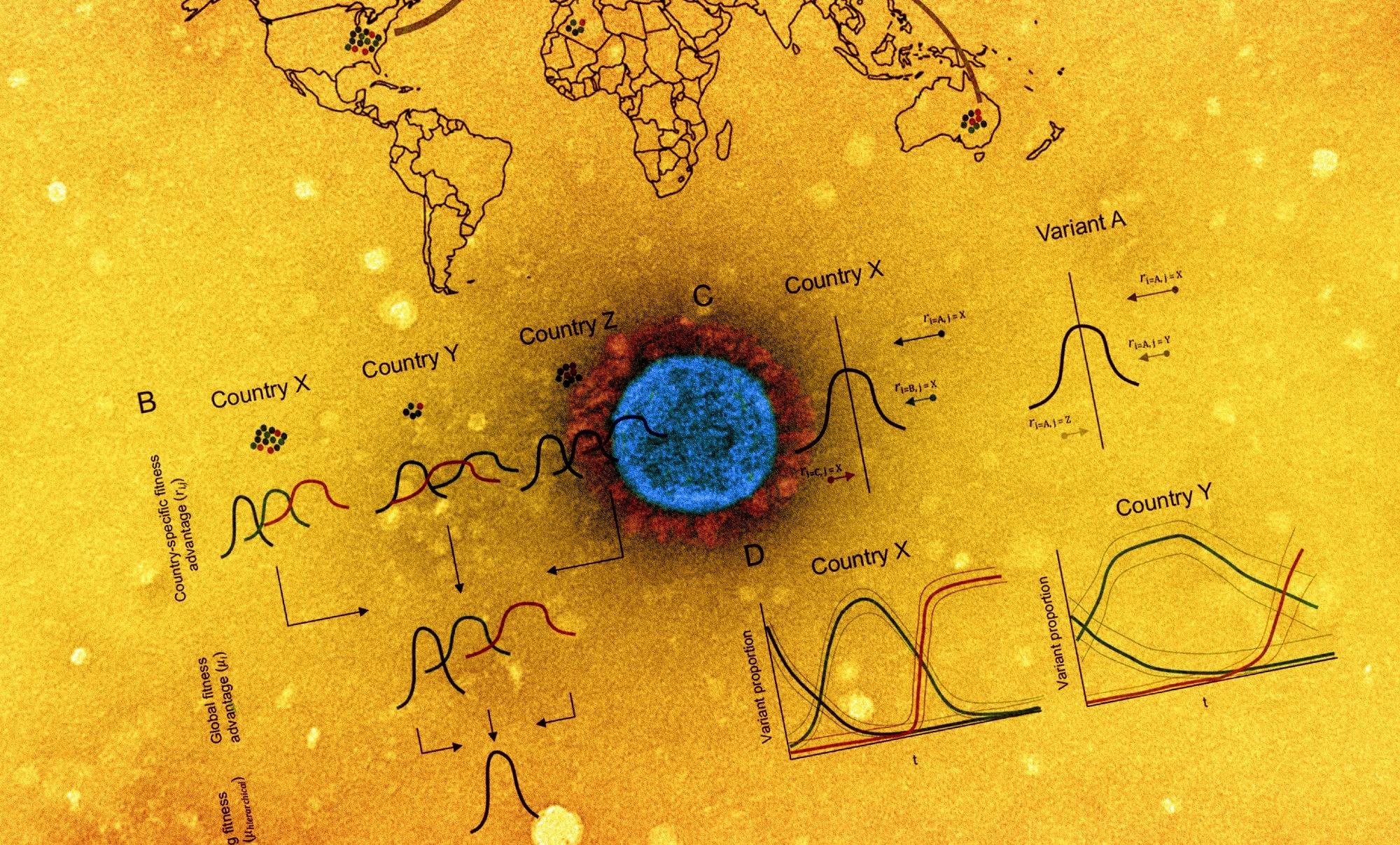 The study and findings

The present study reported a hierarchical modeling method that estimates variants’ growth trajectories over time. Most SARS-CoV-2 sequences were from the United States (US) and the United Kingdom (UK), contributing nearly 55% of all sequences available in the Global Initiative on Sharing Avian Influenza Data (GISAID) repository as on July 1, 2022.

Approximately 90.3% of all SARS-CoV-2 sequences were submitted to GISAID by 10% of countries. Contrastingly, countries in the Middle East and Africa submitted a few thousand sequences exempting Kenya and South Africa. The rate of sequencing for emergent variants accelerated over time. 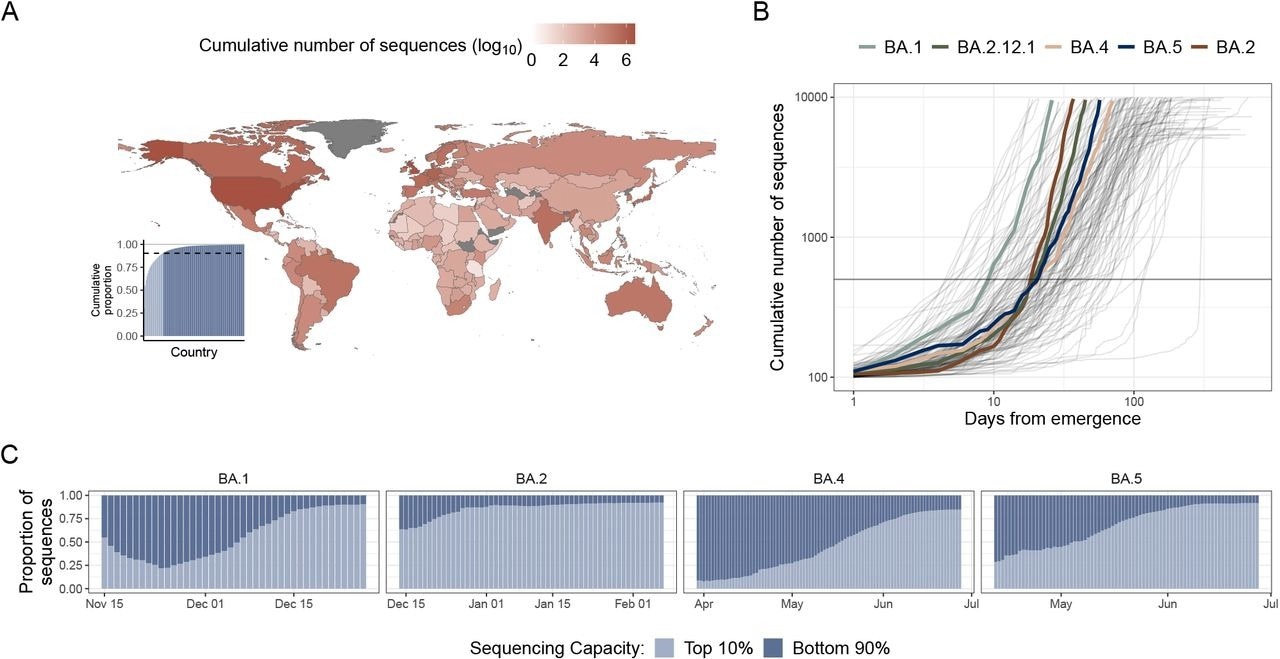 The landscape of SARS-CoV-2 genomic data and early emergent variant dynamics. (A) Shading indicates the cumulative number, in log10 scale, of SARS-CoV-2 sequences submitted to GISAID as of July 1st, 2022. (inset) Cumulative proportion of all sequences, with countries ordered by their relative contribution. Light blue indicates countries in the top 10th percentile of contributions, and dark blue indicates countries in the bottom 90th percentile of countries. (B) The cumulative number of sequences versus days from variant emergence, with variants of interest which grew rapidly after emergence highlighted in color. A gray horizontal line at 500 sequences is included to highlight the time it took to reach this level for the key variants. (C) The proportion of sequences sampled by the high sequencing capacity countries (light blue) vs. the lower sequencing capacity countries (dark blue) over time, starting from after a variant’s emergence.

Initially, the number of sequences of a variant grew slowly and linearly when its prevalence was low. Then, as the variant increased in circulation, there was an exponential surge in its sequences. Shortly after emergence, most SARS-CoV-2 Omicron BA.1, BA.2, or BA.5 lineage sequences were from outside the high-capacity nations.

Nonetheless, once the variants were detected in countries with high-sequencing capacity, sequences were rapidly collected, becoming the majority. The researchers designed a general method to examine the dynamics of competing variants and relative variant fitness advantages by pooling data from across countries and applied this to emergent SARS-CoV-2 variants.

Of note, the BA.5 variant cases were more in Bangladesh (56.5%) as of July 1, 2022, than in India (13.8%) despite the geographic proximity. Further, the researchers observed heterogeneity in country-specific fitness advantages by variant types. For instance, BA.4 and BA.5 variants had higher relative fitness in the US and the UK than in India or South Africa. However, for the BA.2.12.1 variant, the relative fitness was much lower in the US than in the UK.

The authors found that Omicron BA.5 had higher fitness than BA.2.12.1 or BA.4. The BA.2.12.1, BA.4, and BA.5 variants were more fit than the BA.2 variant. In comparison, the BA.1 variant had lower fitness than BA.2. In addition, the team retrospectively validated the model estimates from five successive reference dates: April 30, May 16, May 27, June 4, and June 27, 2022. Finally, the multi-country estimates were compared to those from a single-country fits (single-country model). 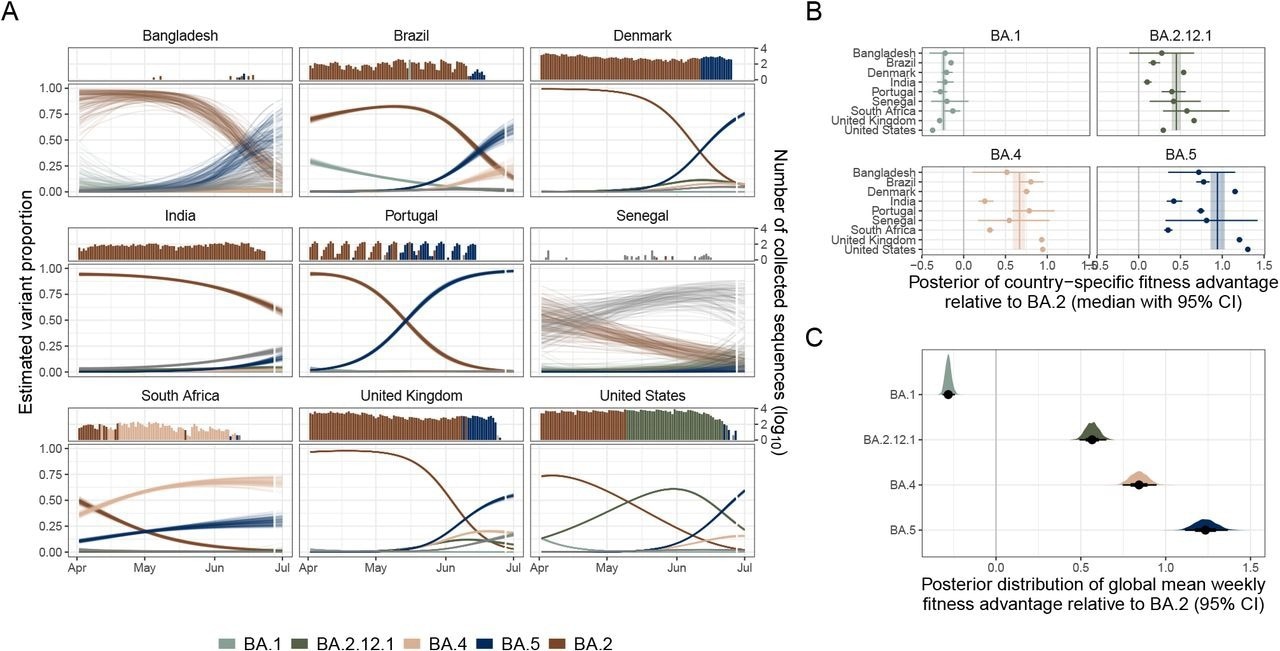 In summary, the research team described a method to estimate the growth of competing variants globally and locally and applied it to emergent SARS-CoV-2 variants, highlighting the robustness of the model for variants with limited sequences and in regions with limited sequencing capacity. This approach can be relevant for low- and middle-income countries, increasing data for local public health decisions while building capacity for the future.

medRxiv publishes preliminary scientific reports that are not peer-reviewed and, therefore, should not be regarded as conclusive, guide clinical practice/health-related behavior, or treated as established information