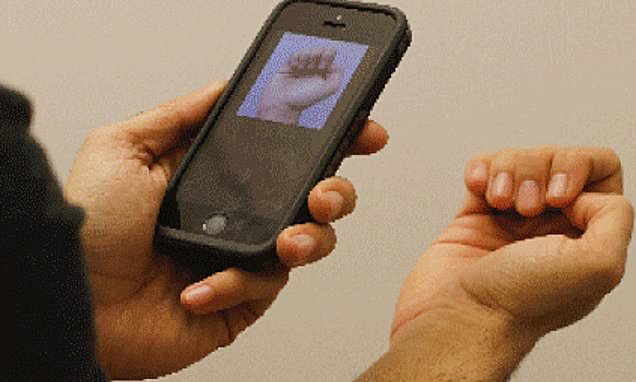 A photo of your FINGERNAILS could reveal anemia: Scientists create new cell phone app that can measure red blood cell count without a blood test

An innovative cell phone app allows people to test themselves for anemia without even drawing blood, a new study reveals.

Developed by an Emory University engineering student with a blood disorder, the new app scans photos taken of the fingernail beds for signs of the amount of hemoglobin – which help prevent out-of-control bleeding – in the blood.

There are a number of environmental and genetic causes for anemia and for some of the most serious forms, regular blood tests are required to determine how regularly blood transfusions are necessary.

But the new app has shown promise to cut out the hassle, cost, and pesky needle prick to test for anemia. 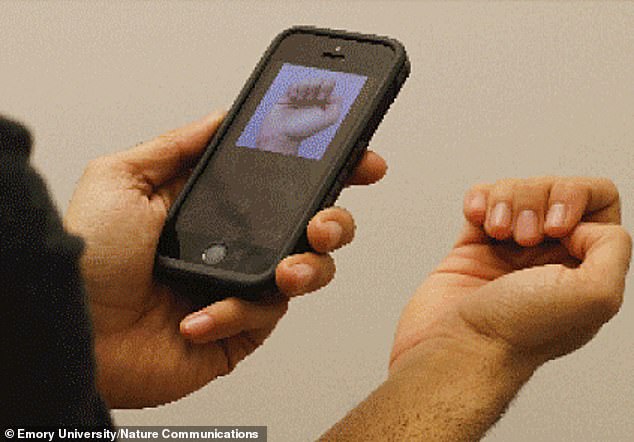 It occurs when someone has a shortage of iron in their blood, a key ingredient to the production of red blood cells that allow clotting, which prevents us from losing excessive amounts of blood.

These blood cells also act as a mass transit system for oxygen to reach all of the body’s tissues.

Most of the time, anemia is caused by an iron deficiency which may in turn be the result heavy menstruation or stages of life when there’s a high demand on the blood supply, like growth spurts or pregnancy.

These temporary bouts of anemia are usually fairly simple to detect, diagnose and treat.

Most people will become pale, weak, tired, short of breath or woozy and sometimes their tongues will change, becoming swollen and smooth.

Often the issue can be resolved with iron supplements, but if iron deficiency persists, some may have to have surgery or blood transfusions.

But for some, the condition is chronic and can become life-threatening.

That was the case for Rob Mannino, a biomedical engineering PhD student at Emory in Atlanta.

He has suffered from a genetic disorder called beta thalassemia for his entire life.

The inherited disease disrupts the production of hemoglobin, the oxygen-transport protein in red blood cells.

The disease becomes apparent around age two, so since he was a small child, Mannino’s life has had to be scheduled around regular blood tests and transfusions.

Those transfusions are rich in hemoglobin, but this can actually introduce an over-abundance of iron into the blood stream, and that can build up and damage the liver and heart and create hormone imbalances. 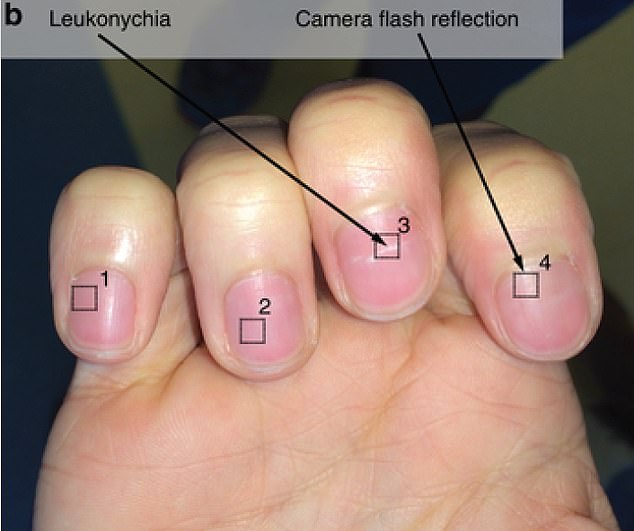 So, ideally, hemoglobin would be regularly monitored so that Mannino would only get transfusions when absolutely necessary, diminishing or at least delaying this damage.

‘My doctors would test my hemoglobin levels more if they could, but it’s a hassle for me to get to the hospital in between transfusions to receive this blood test,’ Mannino says.

‘Instead, my doctors currently have to just estimate when I’m going to need a transfusion, based on my hemoglobin level trends.’

Mannino wanted to get rid of the guess work in his medical treatment – and got his chance when he teamed up with Emory blood disorder expert (and fellow biomedical engineer), Dr Wilbur Lam.

Mannino made himself a veritable lab rat, meticulously photographing his nail beds as his hemoglobin levels fluctuated.

The color underneath fingernails provides a unique visual gauge of red blood cells, because there is no melanin – the compound that gives skin its pigment – so the color of that tissue varies with blood composition, rather than skin tone or tan.

Mannino’s fingernail selfies ‘enabled him to constantly refine and tweak his technology on himself in a very efficient manner. So essentially, he was his own perfect initial test subject with each iteration of the app,’ said Dr Lam. 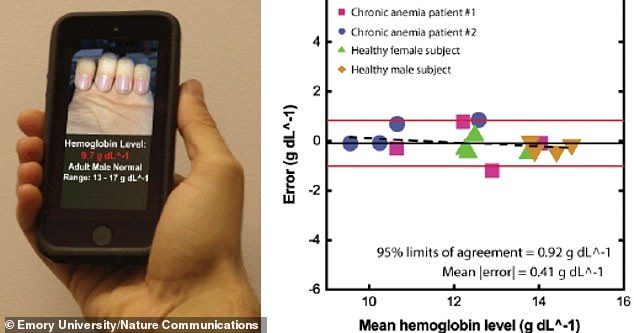 Dr Lam, Mannino and their research team honed the app’s accuracy by expanding the links Mannino made between his fingernail bed colors and hemoglobin levels by taking photos and blood tests of another 337 people.

When tested on four people, the resulting photo-based algorithm was as accurate as bedside blood tests taken at hospitals.

And, Lam says: ‘This is just a snapshot of the accuracy right now. The algorithm gets smarter with every patient enrolled.’

The app won’t be sufficiently accurate to diagnose anemia, but once someone knows they have or are prone to the condition, the researchers are confident it will help people track their status and know when they need treatment.

‘This is a standalone app whose accuracy is on par with currently available point-of-care tests without the need to draw blood,’ he summarizes.

The app could be especially useful to women who are pregnant or menstruating and particularly prone to anemia, the researchers say.