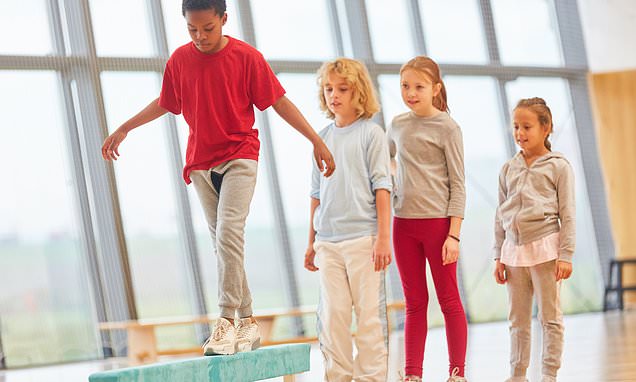 Covid restrictions messed up children’s balance because they spent so much time on screens, study warns

Restrictions on children’s activities during pandemic lockdowns damaged their ability to stand up straight.

School closures threw young people’s lives into chaos and were linked to a rise in social problems, mental health issues, and stunted development.

Now, a study has found that closures also affected children’s ability to balance because they spent more time engrossed in technology and not enough time playing outside with peers.

Study leader Dr Tadashi Ito, a motion analysis expert from the Nagoya University, said: ‘Limitations on children’s opportunities for physical activity because of the outbreak of the novel coronavirus have had a significant impact on the development of physical function and lifestyle and may cause physical deterioration and health problems in the future.’ 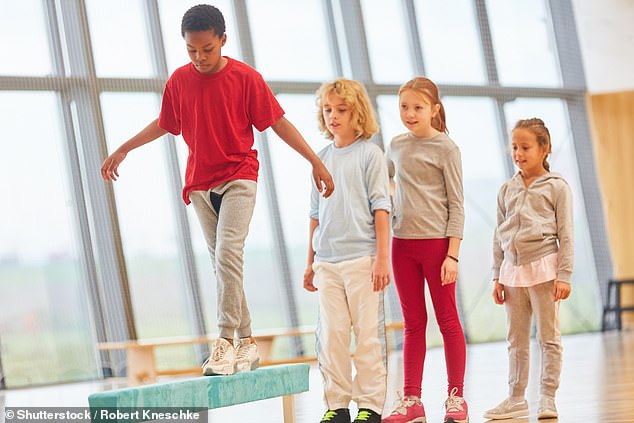 Children’s abilities to balance were harmed during the pandemic when after-school sports were restricted, children couldn’t play with friends outside as much, and, as a result, spent more time on screens

The abrupt change to the way children get physically active hindered their ability to hone the body’s muscles which help with balance while moving. Walking, for instance, requires you to stand on one leg at one time. Weak leg muscles make doing that very difficult.

It also meant that children got less sleep, had a higher bodyfat percentage BLA BLA

The study was conducted by doctors from Nagoya University and the Aichi Prefectural Mikawa Aoitori Medical and Rehabilitation Center for Developmental Disabilities.

The researchers, led by Dr Ito, found that during the pandemic, children in that age group were more likely to have decreased balance ability when moving.

Dr Ito said: ‘Since the outbreak of the novel coronavirus in Japan after April 2020, children have not been able to engage in sufficient physical education, sports activities, and outdoor play at school.

‘It became clear that balance ability during movement was easily affected, lifestyle habits were disrupted, and the percentage of body fat was likely to increase.’

The team obtained medical exam results from 60 Japanese children aged nine to 15 before the pandemic began (between January 2018 and March 2020) and during the worst of it (from June 2020 and June 2022).

Their findings were published in the International Journal of Environmental Research and Public Health.

Only 40 children were included in the second sample after 20 were excluded for having underlying conditions that could skew the results, such as orthopedic, brain, respiratory and eye issues.

Balance was measured using the single leg stance or one-legged stance test, or however long a child could remain standing on a single leg with their eyes open.

Researchers also ran the two-step test, in which children were instructed to stand with their toes behind a starting line and take two steps, each as large as possible, and then align both of their feet.

Children scored markedly lower during the pandemic than before on both tests.

Before the pandemic, they also had an average 13 percent body fat. During, though, that rate increased to an average of about 16 percent.

The time spent on physical activity before and during the pandemic was not much different, though.

Children engaged in physical activities at home, on sidewalks, and roads, leading researchers to blame poorer balance and higher bodyfat on fewer club activities and outdoor playtime with other children.

While the study was conducted in Japan and reflects activities of Japanese youth, balance functions of US children have most likely taken a hit given tight early restrictions on free movement such as after school sports.

The federal government, while not outright cancelling after school sports, strongly recommended schools to ‘cancel or hold high-risk sports and extra-curricular activities virtually’ during the worst of the omicron surge last winter.

Now that vaccines are widely available for all age groups, though, life has returned to normal for the most part, including the restoration of extracurricular activities that promote physical activity.