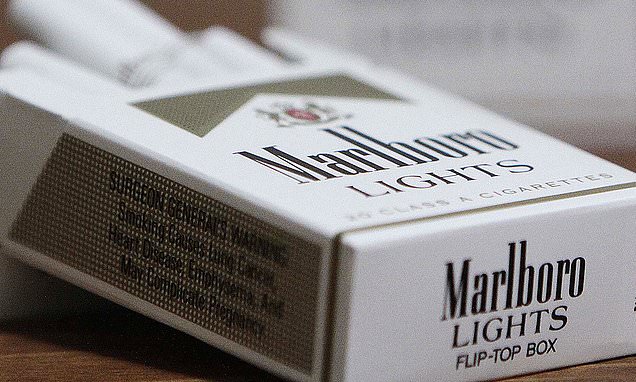 Smokers of ‘light’ or menthol cigarettes are just as likely to die from lung cancer as those who use the traditional ones, researchers claim.

Scientists have warned there is no safe cigarette, despite people believing low-tar options may be a healthier choice.

Researchers at the Medical University of South Carolina analysed health records of 14,000 smokers, aged between 55 and 74.

All the volunteers had smoker for at least 30 ‘pack years’ – the number of packs per day multiplied by years smoked.

Academics calculated the effect of smoking habits on lung cancer incidence and mortality, as well as deaths from all causes, although it is not clear what other causes were studied.

No difference was found in lung cancer incidence or deaths, or all-cause mortality between regular cigarette smokers and light or ultralight smokers. 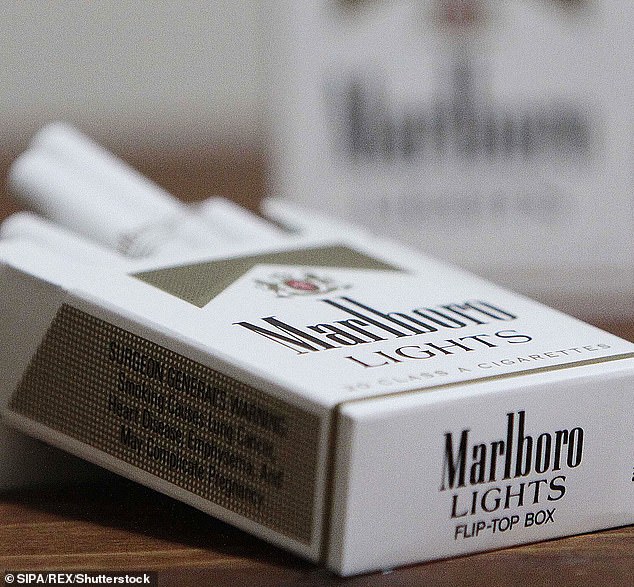 Smokers who use ‘light’ or menthol cigarettes are just as likely to die from lung cancer than regular smokers, experts at the Medical University of South Carolina have said

Lead author Dr Nina Thomas said: ‘There’s still this idea that light or ultralight might be better for you, and it’s not.

‘All cigarettes are bad. They all increase the risk for lung cancer and the risk of dying from lung cancer.’

However, the results did show smokers of light cigarettes – sold by brands such as Marlboro – had a lower dependence on tobacco.

But they were less likely to kick the habit than regular cigarette smokers, according to the data from The National Lung Screening Trial in the US.

Smoking is one of the biggest causes of death and illness in the UK.

Every year around 78,000 people in the UK die from smoking, with many more living with debilitating smoking-related illnesses.

Tobacco use is the leading cause of preventable disease, disability, and death in the United States.

Each year, nearly half a million Americans die prematurely of smoking or exposure to secondhand smoke. Another 16 million live with a serious illness caused by smoking.

Some may be fatal, and others can cause irreversible long-term damage.

Smoking causes around seven out of every ten cases of lung cancer as well as causing other cancers.

It damages heart and blood circulation, increasing the risk of developing conditions such as coronary heart disease, heart attack, stroke.

Breathing in secondhand smoke, also known as passive smoking, increases your risk of getting the same health conditions as smokers.

Light or ultralight cigarettes, which started being developed in the 1960s, are advertised as having less tobacco, nicotine, tar, and a milder flavour. Menthol cigarettes are flavoured with menthol.

And Dr Thomas added there was also ‘no difference’ in any of the outcomes when comparing menthol smokers to adults keen on normal cigarettes.

But smokers of unfiltered cigarettes were 40 per cent more likely to develop lung cancer, and almost twice as likely to die from it.

They’re also 30 per cent more likely to die of any cause and are more dependent, when compared with filtered cigarette smokers.

Filtered cigarettes – with the filter at the top – were introduced in the 1950s as a solution to the growing concern over cigarette safety.

Before this, all cigarettes were sold ‘unfiltered’, which you can still make today with rolling tobacco.

Dr Thomas said there have been several alterations to cigarettes in the past 70 years in response to public concern about health risks.

‘Despite these changes, smoking remains associated with 90 per cent of lung cancer, the leading cause of cancer related mortality,’ she said.

Smoking rates have fallen over the past 50 years but around 40million Americans still smoke, according the Centers for Disease Control and Prevention.

The number of smokers in the UK has also decreased over the past few decades, to a record low of just 14.9 per cent, according to the NHS.

Of those who do smoke, 60.8 per cent intend to quit, according to the Office for National Statistics.

Popular heated tobacco devices may cause the same damage to lung cells as traditional cigarettes, researchers from the University of Technology Sydney said.

Meanwhile, e-cigarettes – or vaping, as it’s commonly known – are also toxic to the cells which protect the lungs, so may not be a safe alternative either.

Both electronic devices are now thought to cause the airway damage seen in people with the lung diseases emphysema, bronchitis and cancer.

Australian researchers did lab tests on the effects of the devices and cigarettes on epithelial cells and smooth muscle cells taken from the human airways.

In healthy lungs, epithelial cells act as the first line of defence to any foreign particles entering the airway while smooth muscle cells maintain its structure.

The study found the devices harm the lung cells which protect the airways, in a similar way to cigarette smoke, causing scarring and reshaping of the airway seen in lung patients.

The study found the electronic devices caused this damage, including changes to cell structure and function, as well as a ‘cry for help’ inflammatory response.

That inflammatory response was as strong for the heated tobacco device as when the lung cells were exposed to smoke from Marlboro Red cigarettes.