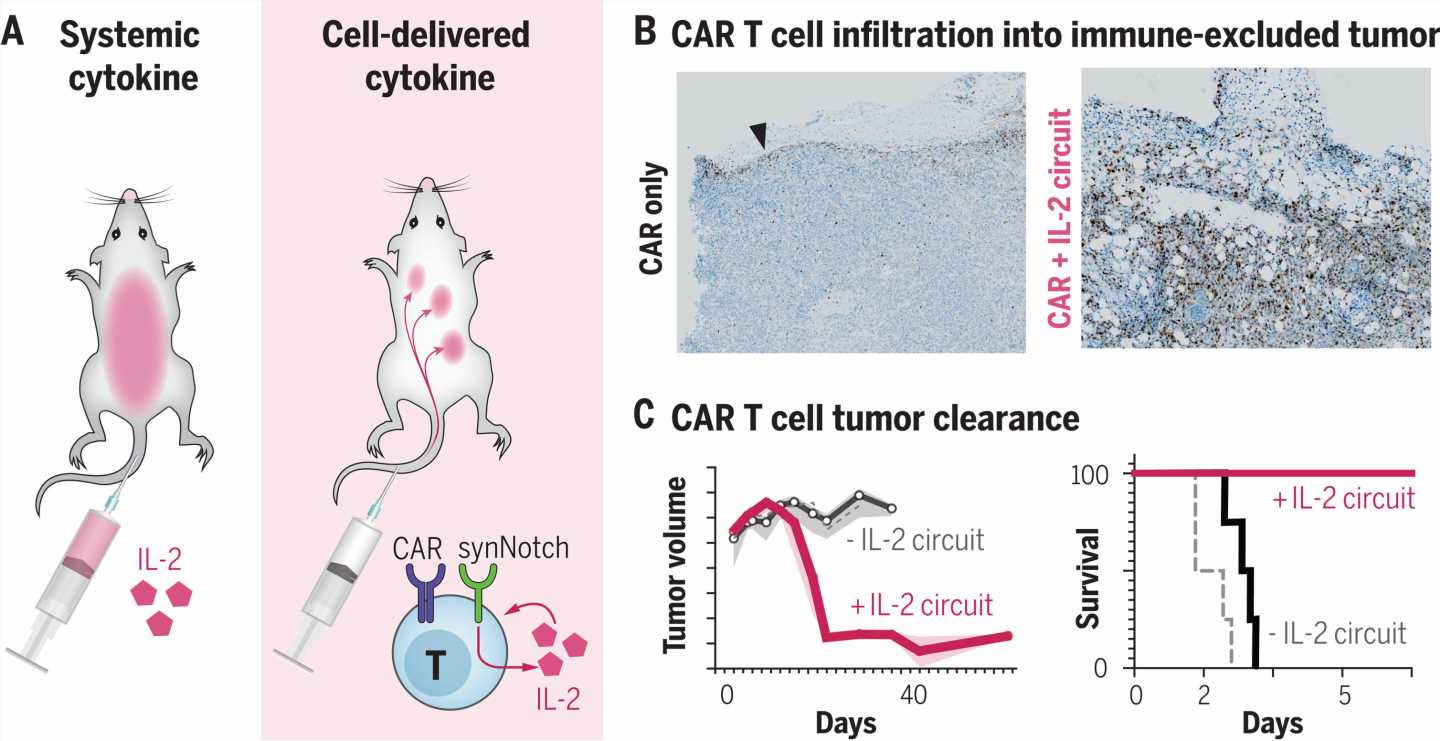 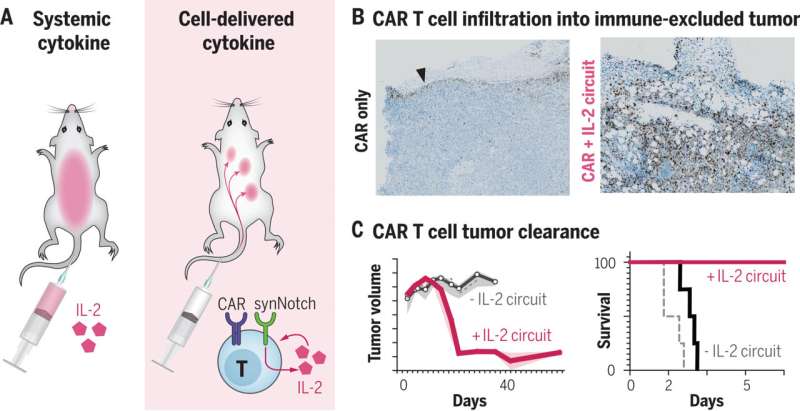 Scientists at UC San Francisco (UCSF) have engineered T cells to produce a potent anti-cancer cytokine, but only when they encounter tumor cells. The immunotherapy eliminated melanoma and pancreatic cancer in mice without major side effects, and it offers a promising new strategy for fighting these and other hard-to-treat cancers.

The cells deliver IL-2, a powerful inflammatory molecule that is naturally produced by the immune system. IL-2 supercharges T cells, immune cells that can kill cancer cells and also protect against infection. While oncologists have known for decades that IL-2 has potent anti-cancer activity, its use has been limited by the toxic response it produces when given systemically.

In the study, published Dec. 15, 2022, in Science, the researchers were able to keep the cytokine contained within the cancer by programming the tumor-infiltrating T cells to make their own IL-2 when they recognized a cancer cell.

“We’ve taken advantage of the ability of these cells to be local delivery agents and to crank out their T-cell amplifiers only when they recognize they’re in the right place,” said Wendell Lim, Ph.D., the Byers Distinguished Professor in cellular and molecular biology, director of the UCSF Cell Design Institute and senior author on the study. “I think this is a model for how we can use cell therapies to deliver many types of potent but toxic therapeutic agents in a much more targeted manner.”

Slipping past the barriers

Cellular therapies have been highly effective against many blood cancers, where the cells are easily accessible because they are floating freely. Solid tumors, however, build multiple defensive walls that prevent therapeutic T cells from entering. And even if the cells do get into the tumor, they often tire out before they’re able to finish off the cancerous cells.

Since the 1980s, oncologists have known that high doses of IL-2 enable T cells to overcome these barriers, and the cytokine has been used as cancer therapy in challenging cancer cases. But simply infusing patients systemically with IL-2 can cause high fever, leaky blood vessels, and organ failure.

Lim and lead author Greg Allen, MD, Ph.D., adjunct assistant professor of medicine and a fellow at the Cell Design Institute, aimed to tame IL-2’s effects by engineering cells that enhance the cancer-killing immune response only where it’s needed: in the tumor.

They chose to go after notoriously difficult-to-treat tumors, like those of the pancreas, ovary and lung, that form nearly iron-clad barriers against T cells.

To engineer cells T cells that could sense when they were in the tumor, the researchers used a synthetic Notch (or synNotch) receptor, a flexible type of molecular sensor, which Lim’s lab developed several years earlier. These receptors span the cell membrane, with ends that protrude both inside and outside the cell. The outside portion recognizes and binds to tumor cells, triggering the inside portion to set the production of IL-2 in motion.

The team tested the synNotch cells on a number of deadly tumors, including melanoma and pancreatic cancer, and found that the cells worked exactly as planned.

“We were able to design these therapeutic cells to slip past the tumor’s defensive barriers. Once in the tumor, they could establish a foothold, and begin effectively killing cancerous cells,” said Allen. “We got on top of these tumors and in some cases cured them.”

The approach owes its success to engineering a circuit in the cell that amplifies the immune response in a controlled way. This induces the cell to produce IL-2 only under the specific conditions it’s programmed to recognize.

“This induction circuit is really a positive-feedback loop, an important element behind making these designer T cells that are able to operate so effectively,” Allen said.

The circuit begins when the synNotch receptor tells the T cell to make IL-2. That IL-2 feeds back on the cell, causing it to divide, in turn creating more cells that make even more IL-2. The entire process is confined within the tumor, protecting the rest of the body from harm.

Allen, who is both a researcher and an oncologist, hopes to begin testing the therapeutic approach in clinical trials with pancreatic cancer patients in 2024.

“The most advanced immunotherapies are just not working in a lot of these difficult solid tumors,” he said. “We think this type of design can overcome one of the major barriers and do it in a way that’s safe and free of side effects.”