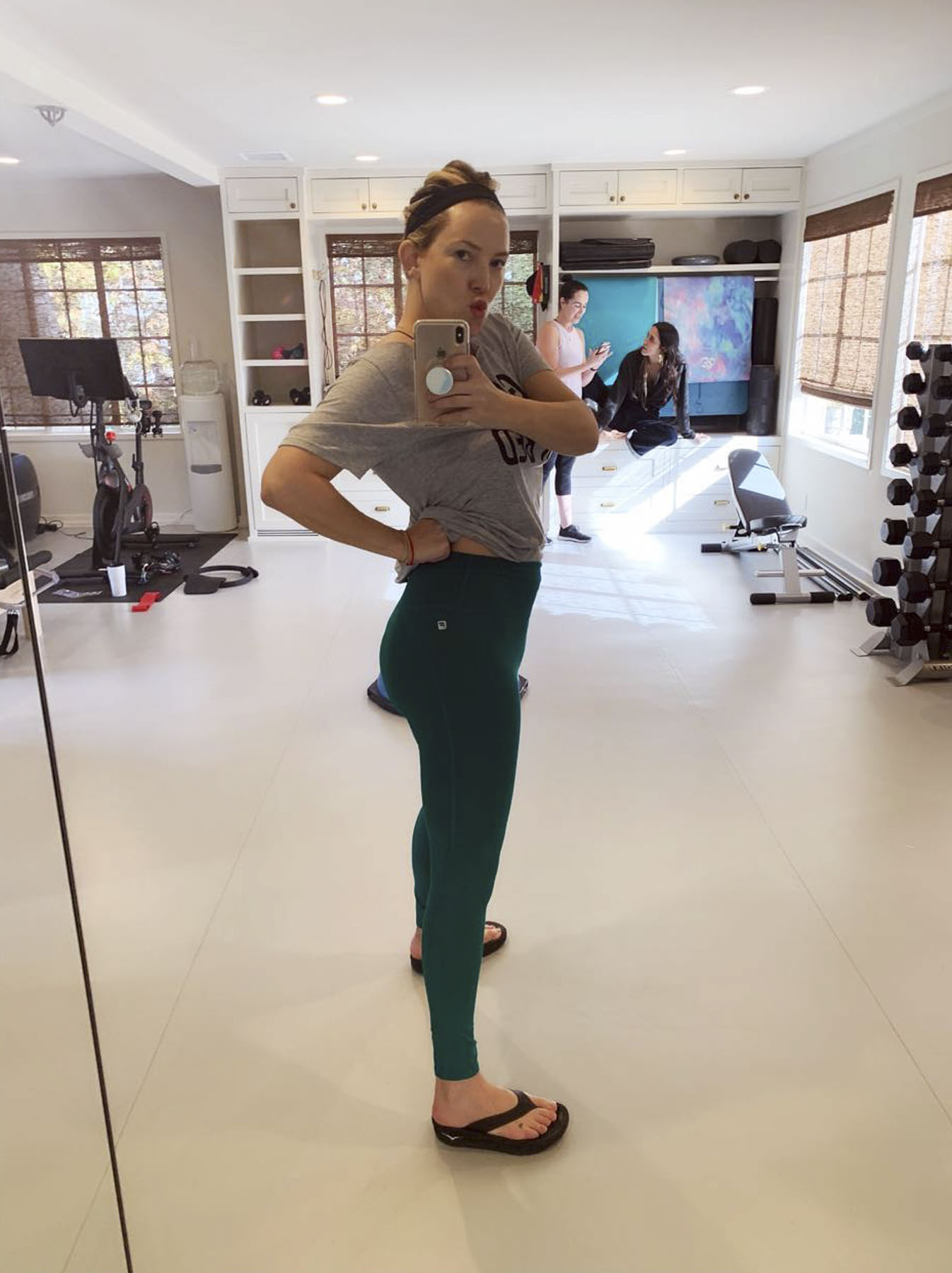 Kate Hudson doesn’t need to suck in her post-baby belly, but she’s doing it for the ‘gram.

The new mom of three, 39, shared a silly selfie on her social media on Sunday revealing her workout attire and slimmed-down figure just two months after welcoming daughter, Rani Rose, with her boyfriend Danny Fujikawa. In the snapshot, she’s making a fishface at the camera as she holds up her phone and shows off her glutes and thighs emphasized by her leggings.

“The Sunday suck in,” she captioned the photo alongside the blushing emoji. She also tagged the two women, singer Jesse Jo Stark and trainer Nicole Stuart, exercising in the background and called them, “seriously distracted!  #Hello…? #Busted.”

Also on Sunday, the How to Lose a Guy in 10 Days star announced that she is the newest ambassador for WW — formerly Weight Watchers.

“It came at a perfect time for me because at this point, after having three babies, it’s like sense memory. You want to start getting back into shape and to get strong again and focus on your own personal health,” Hudson told PEOPLE exclusively. “It’s hard when you have babies. Everyone comes before you, and you have to find that time to just focus in on yourself.”

With WW, she has a “simple and helpful” way to spend some time on herself and keep track of what she’s eating. Hudson said that she already started using WW’s Freestyle program, and didn’t have to change too much about how she’s eating.

That’s what she’s looking for after having Rani. Hudson posted on Instagram at the end of November, about eight weeks after giving birth, that she wants “to shed 25 lbs.” by the spring, when she’ll start she filming a new movie.

Hudson said that she learned from her first pregnancy with son Ryder, now 15, because she “gained quite a bit of weight.” Her next two pregnancies — with her second son Bing, now 5, and with Rani — were different, though she wasn’t as active with her daughter as she would have wanted.

“I was really sick with Rani, like, I couldn’t get out of bed,” she said.

For now, though, she’s excited about the “challenge” of moving her body again.

“I enjoy being disciplined. I enjoy being athletic, and I enjoy being active. So for me it’s actually kind of a fun time to challenge my body again in certain ways,” she said. “After pregnancy, getting your body back into shape for me — especially in fitness — finding my stomach muscles again and pushing myself a little bit harder sometimes are things that I enjoy.”