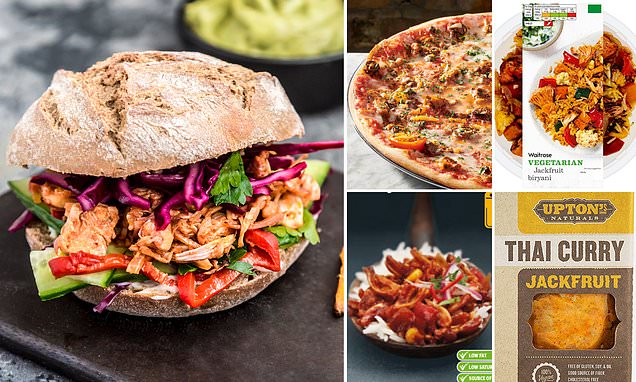 This bun isn’t filled with pulled pork but a tropical plant hailed as the ultimate meal alternative… But is jackfruit as good for you as health fanatics say?

Had your fill of avocados? Tired of turmeric? If so, there is a new and even more exotic health food in town: jackfruit. Foodies have been in raptures about this fibrous, fleshy fruit which – when cooked – has a consistency curiously like meat.

From a jackfruit pulled ‘pork’ sandwich to a jackfruit biryani, Britain’s celebrity chefs have been adding it their menus. And now pre-prepared jackfruit dishes are being stocked by Sainsbury’s and Waitrose, Starbucks and Pizza Express.

Despite this, many shoppers will have been left scratching their heads at this new culinary must-have. Native to south-west India, the jackfruit is the largest tree fruit in the world, typically weighing more than a baby – between 10 and 25 lb. 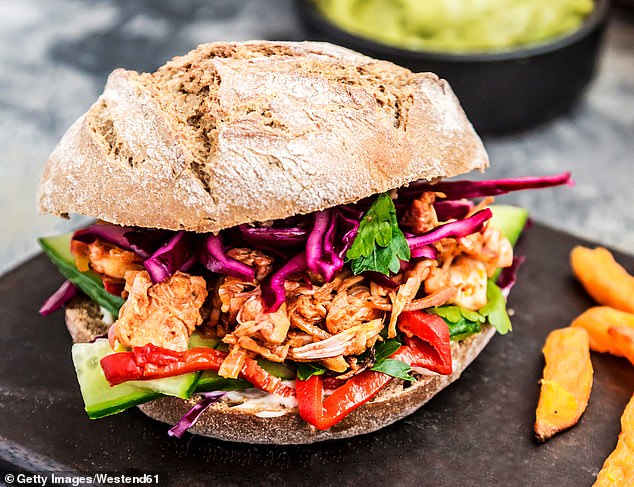 From a jackfruit pulled ‘pork’ sandwich to a jackfruit biryani, Britain’s celebrity chefs have been adding it their menus (stock image)

The massive, elongated oval fruits have a bumpy, green exterior which turns brown and develops a strong, unpleasant odour when ripe. Inside, the pale yellow flesh smells sweet and has a taste that has been likened to a cross between mango and pineapple.

However, it is the unique sinewy nature of the fruit when unripe that has turned it into the meat alternative of the moment.

At this stage, the flesh soaks up any flavour, meaning it can be a substitute for meat in a wide range of popular dishes. But is it actually much better for you than the real thing?

YOU’D ACTUALLY BE BETTER OFF HAVING AN ORANGE

As with any fruit, if you have an 80g fist-sized portion of jackfruit – the flesh is sold in pieces – it will count as one of your recommended five-a-day.

But a serving has just 11mg, or 13 per cent, of the recommended daily intake of Vitamin C, which is essential for helping the body form and maintain connective tissue including bones, blood vessels, and skin. This means that oranges are four times richer.

Online articles claim jackfruit is a great source of fibre, which is used for healthy digestion. But it actually contains only moderate levels – 1.2g per portion, the same as in apples, but less than in strawberries or melons. It’s recommended we consume 30g of fibre a day, although most of us achieve just half of this.

Jackfruit’s quantity of antioxidants – compounds that help prevent cellular damage thought to contribute to conditions such as cancer and heart disease – is also not that impressive. For example, carotene levels are lower than in nectarines and mangos.

However, the fruit is a very good source of blood-pressure-lowering potassium, with about a sixth of the daily requirement of this mineral in an 80g portion, which is more than a banana. 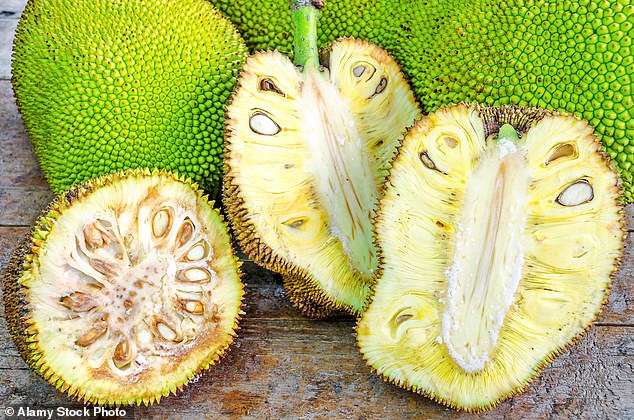 Comparing jackfruit with other fruit and veg is one thing. But putting it side by side with other meat alternatives is quite another, and it doesn’t shape up well.

While most meat alternatives such as quorn or soya – including tofu – have a protein content of about 15 to 20 per cent, not far off the amounts in meat, fish and poultry, this isn’t the case with jackfruit, which is around two per cent protein. Dietician Helen Bond says: ‘We need about 50 grams of protein a day, preferably spread across two or three meals, to maintain strong, healthy muscles.

‘If you are a vegan, you may already be struggling to eat enough protein and so I’d be concerned if people thought of jackfruit as a suitable meat alternative.’

LOW IN CALORIES, SO IT’S GOOD FOR SLIMMERS

IT may be rather bland and not much to write home about nutritionally, but jackfruit is far lower in calories than meat or other alternatives. It also has virtually no fat.

Jackfruit, when eaten unadulterated, delivers about 95 calories per 100g, less than half that of pork and more than 50 calories less than the equivalent amount of chicken, making it useful for slimmers.

Being low in protein means a meal made with jackfruit is also likely to be much less satiating.

‘You may save some calories but if your appetite isn’t curbed, that may not provide an advantage,’ says Bond.

So what actually is in jackfruit? Well, water and carbohydrates, mostly. There are 25g of carbs per 100g, and much of this is sugar, although, as it is not processed, this doesn’t count toward your daily 30g free sugar allowance.

… BUT WATCH OUT FOR UNHEALTHY ADDITIONS

To make a product that can pass as a meat dish means jackfruit also needs to be combined with strong flavours.

‘As with most meat alternatives, sauces and condiments are needed to make a dish that is interesting and palatable enough to eat,’ says Bond. ‘In turn, that may mean high levels of sugar, salt – and calories.’

So how do jackfruit products rate? Check out our round-up of just a few dishes below…

We put supermarket jackfruit dishes to health (and taste) test 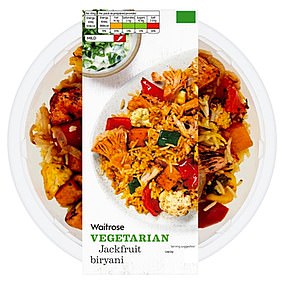 This rice-based low-calorie curry provides 57 per cent of the daily recommended fibre, and there’s no added sugar. Jackfruit chunks are impressively meaty and flavourful but this contains a third of the protein of a standard chicken curry. Adding half a tin of lentils or chickpeas will give the protein a boost. 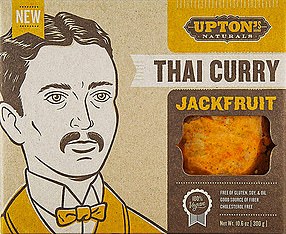 Jackfruit pieces in a Thai coconut sauce. Low in calories and no hidden sugar. The jackfruit is a little mushy in parts, and the sauce quite tangy. It doesn’t come with rice, so you need to add your own. Again, chucking in some beans or chickpeas would top up the protein and keep you feeling fuller for longer. 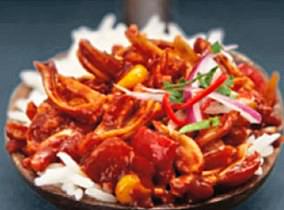 Jackfruit chunks in a tangy, sweet and sticky sauce. This contains a fraction of the protein of meat. However, it’s also much lower in saturated fat. There are four teaspoons of sugar per serving – but that’s the price you pay for good BBQ. Stuffed in a pulled ‘pork’ bun, you might well believe it was the real thing. 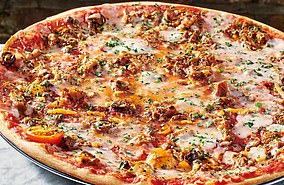 Pizza topped with jackfruit in a tomato, olive and caper sauce, and vegan mozzarella on extra thin base. Low calorie and the cheese (bland) provides half the daily protein requirement. High salt content with over a full day’s recommendation. Jackfruit is mushy, texturless and flavourless. Not very nice. 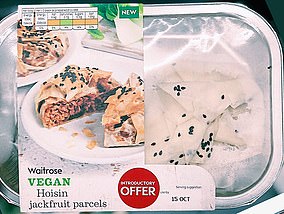 Jackfruit, edamame beans, shredded carrot and hoisin sauce, encased in filo pastry. Low in saturated fat and calories for a main meal, but low in protein too and has three teaspoons of sugar, mainly added. Jackfruit lacked texture or bite – just a sweet, goopy paste. Disappointing.