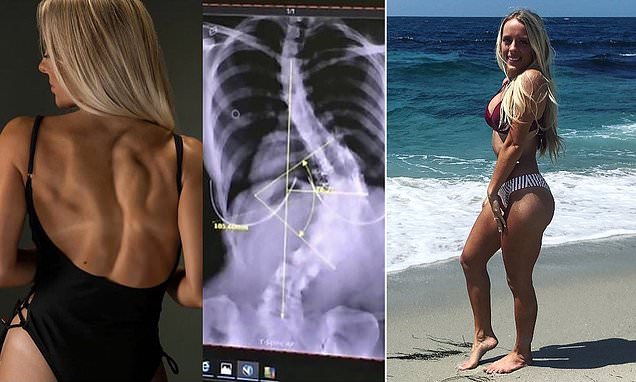 Scoliosis victim, 25, DECLINES surgery to fix the 80-degree curve in her spine – despite doctors warning ‘it could bend into her heart and kill her’

An Instagram star is refusing to have surgery to correct the 80-degree curve in her spine – despite doctors warning it could kill her.

Hayley Wakefield, 25, from Scottsdale, Arizona, was diagnosed with scoliosis at just nine, when her parents noticed her hips were uneven.

Doctors warned the Instagram star’s parents that without surgery her spine would curve into her heart and potentially kill her.

But after doing their own research, her parents discovered no-one has actually ever died from the condition.

Miss Wakefield, who has more than 80,000 followers on Instagram, therefore shunned the operation in favour of chiropractic care, stretches and exercises that strengthen the muscles that support her spine.

Slowly, the curve of Miss Wakefield’s spine has reduced from 92 degrees to between 75 and 80. 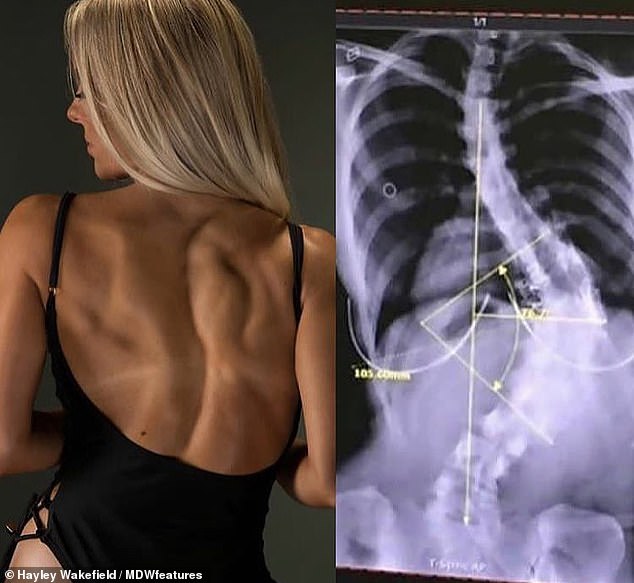 Hayley Wakefield is refusing surgery to correct the 80-degree curve in her spine despite doctors warning it could kill her. She was diagnosed with scoliosis at just nine years old when her parents noticed her hips were uneven. Her condition is seen left and right in an X-ray 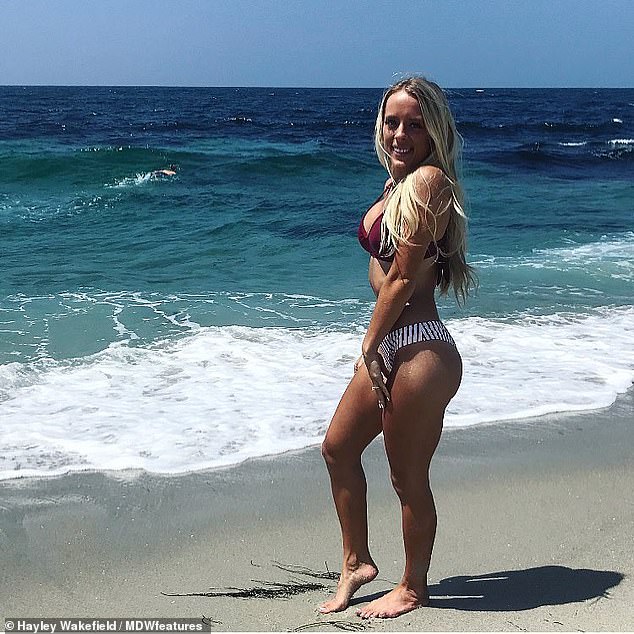 Doctors warned her spine could continue to curve into her heart, however, the Instagram star found no evidence anyone has ever died from scoliosis. Pictured after embracing her condition, she now uses chiropractic techniques and stretches to strengthen her back

Miss Wakefield said: ‘When I was diagnosed with scoliosis we had medical doctors tell my family and I that if I did not get the surgery my spine could curve into my heart and that I could die.

‘We soon later discovered that no one had ever died from scoliosis.

‘Sadly, in the traditional medical field they are not taught other methods of treatment and many believe that surgery is the only route.

‘If you opt for the surgery they place metal rods all up and down your back. The more severe your scoliosis the less likely this surgery is to actually help.

‘You will lack mobility and can experience even more stiffness and pain than before.’

After reading about how other scoliosis sufferers have had poor experiences with surgery, Miss Wakefield decided to instead focus on staying active and strengthening her back.

‘I still stand behind the decision to practice alternative methods and to this day I live with very little pain,’ she said.

‘It is an extremely slow process, but I have been able to decrease my curve by implementing certain exercises and stretching techniques that were designed for me and my curve by one of my chiropractors.

‘My ultimate goal is to look and feel as healthy as possible and help other people do the same.’

She added: ‘I was blessed enough to have my parents and grandparents who instilled in me that I was not disabled and I could do anything that anyone else could do.

‘They raised me with confidence and never treated me as if I had a major problem. This helped me to see my scoliosis as just something I had, not who I was.’ 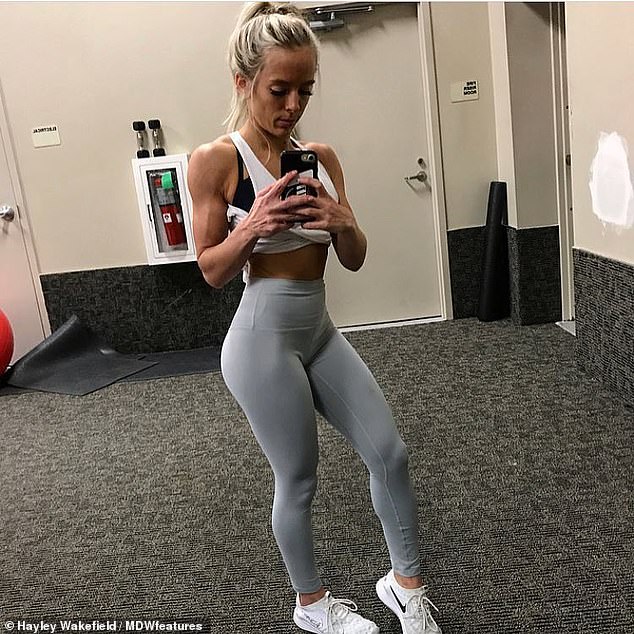 Since using exercise to strengthen the muscles around her spine, Miss Wakefield has seen the curve of her backbone reduce from 92 degrees to between 75 and 80. The fitness influencer has 83.9k Instagram followers. She preaches the importance of embracing your uniqueness 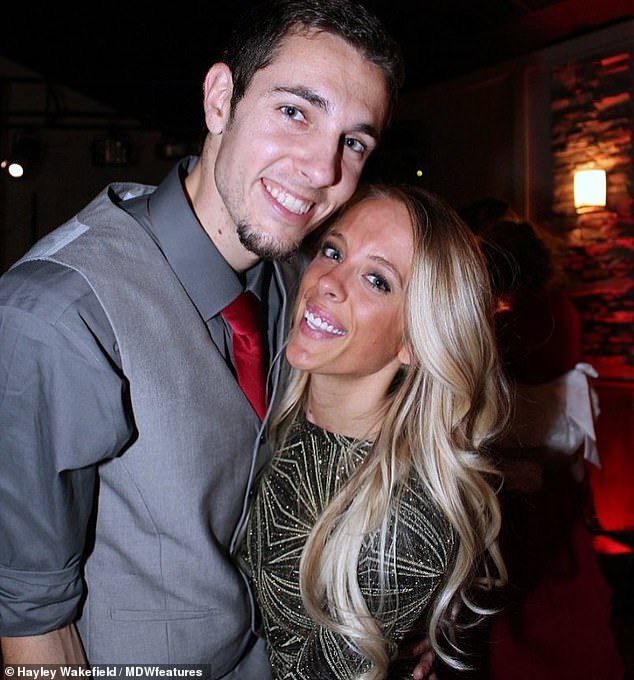 Pictured with her boyfriend, Miss Wakefield feels lucky her condition does not affect her day-to-day aside from occasional pain. However, she does sometimes get down about her looks 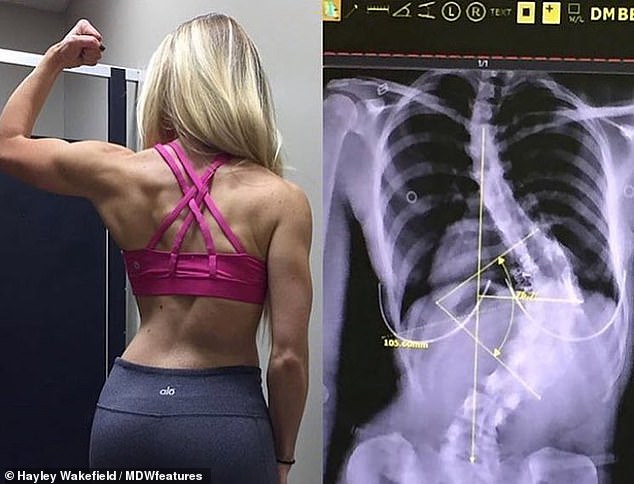 Overall, Miss Wakefield has always refused to let her condition (seen left and right in the X-ray) hold her back and uses her disorder as a tool to inspire other scoliosis sufferers

Scoliosis is the abnormal curvature of the spine in an S-shape.

Signs include a visible curve in the spine, one shoulder or hip being more prominent than the other, clothes not hanging properly and back pain.

Pain usually only affects adults with the condition.

In most cases, the cause of the scoliosis is not known but it can be caused by cerebral palsy and muscular dystrophy.

In the UK, scoliosis affects three to four children could of every 1,000.

It is also thought that as many as 70 per cent of over 65s have some degree of scoliosis.

It is more common in women than in men.

Most children with the condition do not require treatment as it is mild and corrects itself as the child grows.

However, in severe cases the child may need to wear a back brace until they stop growing.

Occasionally, a child needs surgery to straighten their spine.

In adults, it is usually too late to treat the condition with a back brace or surgery so treatment revolves around reducing pain.

Miss Wakefield does not feel her condition affects her day-to-day but admits she does somehow get down about her appearance.

However, with time, she has come to see it as part of who she is.

‘I preach to my online followers the importance of confidence and owning whatever flaws we have, but of course being human I have days of insecurities as well,’ she said.

‘Now and again I will experience a little bit of pain or stiffness if I’m sitting too long or walking all day but overall I feel very blessed and feel the reason I am able to live virtually pain free is because of fitness.’

Overall, Miss Wakefield strives to live as normal a life as possible and preaches acceptance among her followers.

‘Don’t be defined by the cards you’ve been dealt. A problem is only as big as you make it,’ she said.

‘I took my situation and used it for good and hope to inspire and help as many people as possible.

‘Everyone is dealing with something difficult in their life, so we can sit and feel sorry for ourselves or we can make the best of it and inspire others along the way.’

Miss Wakefield has even released an eBook with tips for other scoliosis sufferers.

‘I take so much pride in my eBook and know that if people implement the tools inside they can greatly benefit their life. My goal is to get my eBook in as many people’s hands as possible,’ she said. 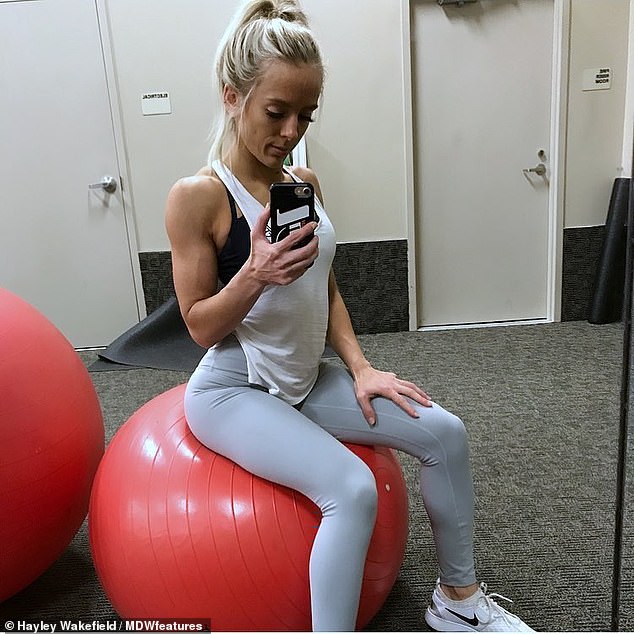 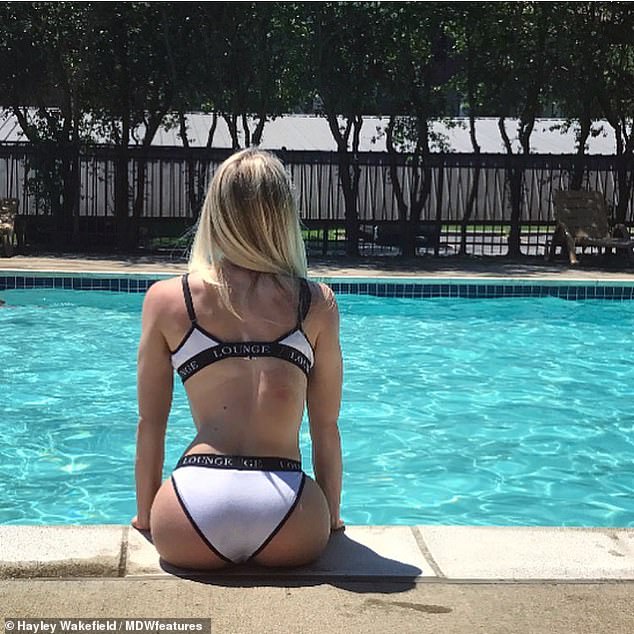 Miss Wakefield has always strove to live as normal a life as possible, saying ‘don’t be defined by the cards you’ve been dealt. A problem is only as big as you make it’ 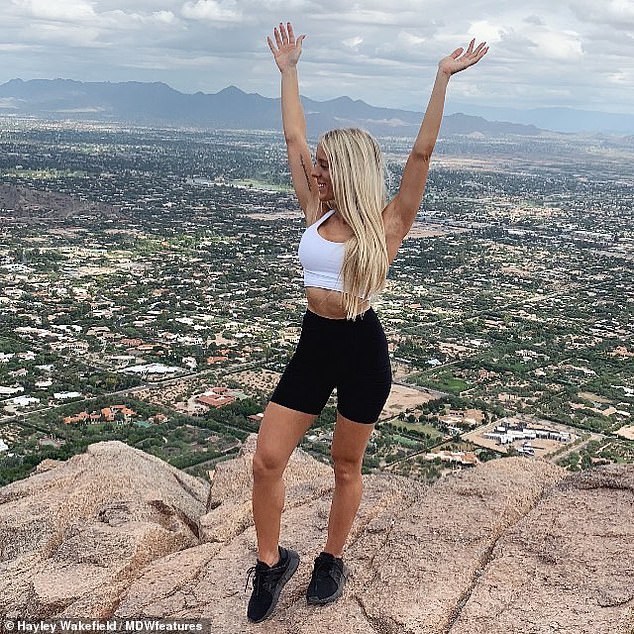 Miss Wakefield credits her fitness for allowing her to ‘live virtually pain free’, with her only experiencing stiffness if she sits too long or does a lot of walking