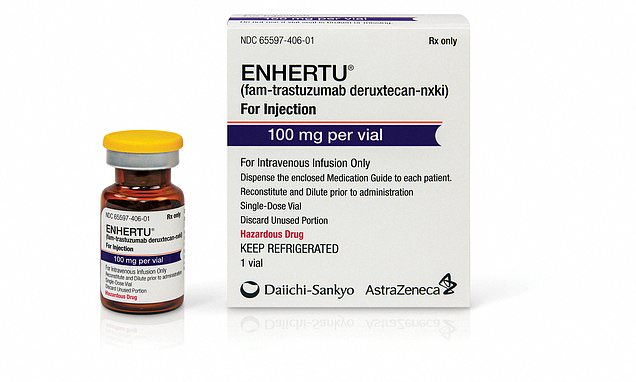 Hundreds more women will be given a drug hailed as ‘a lifeline’ to patients with incurable breast cancer.

Enhertu tracks down breast cancer cells and binds to a protein on their surface called HER-2, before delivering a powerful dose of chemotherapy directly to the tumour.

The cutting-edge treatment, which is administered intravenously every three weeks, was approved for use on the NHS last year but for only for patients with high levels of HER-2 on their tumours. 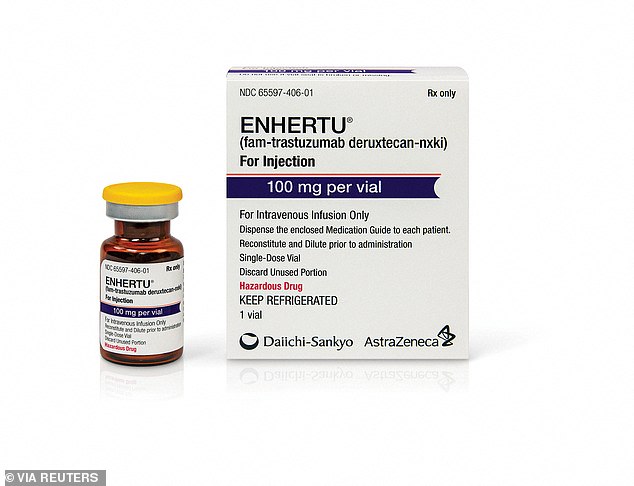 Enhertu tracks down breast cancer cells and binds to a protein on their surface called HER-2, before delivering a powerful dose of chemotherapy directly to the tumour

Successful trials – which found women with incurable breast cancer lived on average 10 months longer than those on standard chemotherapy – were hailed as ‘a pivotal moment’ in treatment earlier this year.

Now the drug watchdog Nice has given the go-ahead for it to be offered to patients sooner, benefiting some 600 more women every year.

Today, the NHS and charities welcomed the decision to expand its use, saying it would allow women with few treatment options ‘more time to live’.

‘This targeted treatment can significantly slow the spread of the disease compared to the current standard treatment, giving people more time to continue doing the things that matter to them,’ she said.

She added: ‘Crucially, this treatment brings people living with incurable secondary breast cancer the hope of more time to live, and we look forward to further results demonstrating its full potential.’

Around 35,000 people are living with metastatic breast cancer in the UK.

Some 80 per cent are categorised as HER2-negative, but of those up to 60 per cent express low levels of HER2.

Trials are ongoing to determine if the drug should be rolled out to these women as well with a final decision expected in February.

Trial results presented at the American Society of Clinical Oncology’s (ASCO) conference in Chicago earlier this year found it resulted in a 49 per cent reduction in the risk of the cancer progressing and a 36 per cent cut in the risk of death.

Overall survival time for patients increased from 17.5 months to 23.9, and the time during which the tumour growth was stable or shrunk nearly doubled, from 5.4 months to 10.1 months.

A course of treatment costs £118,000, although the NHS is expected to have a confidential agreement below this price.

Professor Peter Clark, clinical lead of the NHS England Cancer Drugs Fund, said: ‘This cutting-edge drug will give hundreds of patients with secondary incurable breast cancer hope, increasing the amount of time people have before their cancer gets worse, and allowing them to live normal, healthy lives for longer.’

What is breast cancer?

Breast cancer develops from a cancerous cell which develops in the lining of a duct or lobule in one of the breasts.

When the breast cancer has spread into surrounding breast tissue it is called an ‘invasive’ breast cancer. Some people are diagnosed with ‘carcinoma in situ’, where no cancer cells have grown beyond the duct or lobule.

Most cases develop in women over the age of 50 but younger women are sometimes affected. Breast cancer can develop in men though this is rare.

Staging means how big the cancer is and whether it has spread. Stage 1 is the earliest stage and stage 4 means the cancer has spread to another part of the body.

The cancerous cells are graded from low, which means a slow growth, to high, which is fast growing. High grade cancers are more likely to come back after they have first been treated.

A cancerous tumour starts from one abnormal cell. The exact reason why a cell becomes cancerous is unclear. It is thought that something damages or alters certain genes in the cell. This makes the cell abnormal and multiply ‘out of control’.

Although breast cancer can develop for no apparent reason, there are some risk factors that can increase the chance of developing breast cancer, such as genetics.

What are the symptoms of breast cancer?

The usual first symptom is a painless lump in the breast, although most breast lumps are not cancerous and are fluid filled cysts, which are benign.

The first place that breast cancer usually spreads to is the lymph nodes in the armpit. If this occurs you will develop a swelling or lump in an armpit.

How is breast cancer diagnosed?

If you are confirmed to have breast cancer, further tests may be needed to assess if it has spread. For example, blood tests, an ultrasound scan of the liver or a chest x-ray.

How is breast cancer treated?

Treatment options which may be considered include surgery, chemotherapy, radiotherapy and hormone treatment. Often a combination of two or more of these treatments are used.

How successful is treatment?

The outlook is best in those who are diagnosed when the cancer is still small, and has not spread. Surgical removal of a tumour in an early stage may then give a good chance of cure.

The routine mammography offered to women between the ages of 50 and 70 mean more breast cancers are being diagnosed and treated at an early stage.

For more information visit breastcancernow.org or call its free helpline on 0808 800 6000