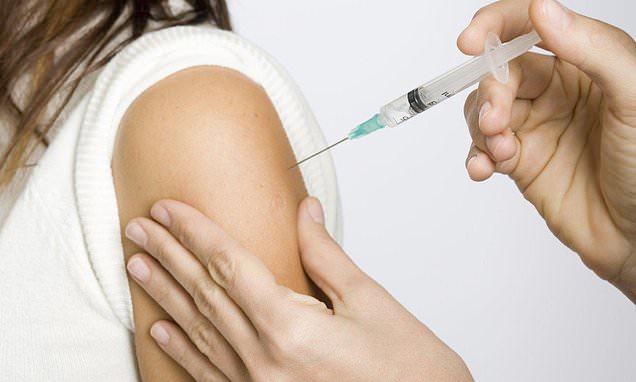 HPV vaccine is ‘near perfect’ as analysis shows the jab is up to 99.8% effective at protecting against cervical cancer-causing viruses

The HPV vaccine is almost 100 per cent effective even in the real world, according to scientists.

Scientists at King’s College London analaysed data from studies involving some 60million people over eight years to work out the true effectiveness of the jab.

Given to teenage girls since 2008 and to boys as well since the beginning of the current school year, the vaccine destroys a virus which causes cancer and warts.

Public health experts have huge hopes for the ‘near perfect’ immunisation and are confident it will wipe out cervical cancer completely within 80 years.

The King’s College research found that the vaccine appears to be 99.8 per cent effective at preventing HPV five years after it is given. 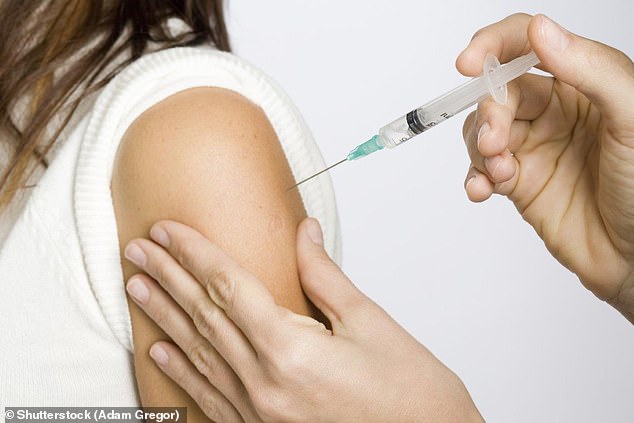 The HPV vaccine is now given to both girls and boys at the age of 12 or 13 for free by the NHS. Experts hope it will wipe out cervical cancer completely within a century (stock image)

‘Our analysis finds that the near perfect efficacy of HPV vaccination in … trials is realised in real-world settings,’ said Professor Peter Sasieni, who did the research.

‘These results imply that the impact of HPV vaccination on preventing cervical cancer could be even greater than estimated previously.’

Types 16 and 18 cause more than 70 per cent of cervical cancer cases in the UK, while types 6 and 11 cause 90 per cent of of genital warts cases – the jab protects against both.

Boys in school Year 8 started receiving the HPV vaccine as well as girls in September 2019, 11 years after it was first introduced.

Health officials decided to broaden the campaign to include boys aged 12 and 13 as well in a bid to prevent more than 100,000 cancers by the year 2058.

Men can get cancer from HPV and can also put women at increased risk by passing the virus through sexual contact.

Human papillomavirus comes in more than 100 different strains and is normally harmless.

But around one in 20 cancers worldwide are linked to HPV and the virus causes huge proportions of cancers of the genitals.

Cervical cancer can be traced back to HPV in 99 per cent of cases, Public Health England said.

While a large proportion of boys may have been protected by immunisation among girls they may grow up to have sex with, introducing the jab for boys as well ensure protection across the population.

Those who grow up to have sex with men, with women who were too old to have the vaccine, or those who just didn’t have the jab for other reasons would not have been protected, for example.

Academics and medical organisations have welcomed the move as a ‘triumph for gender equality in cancer prevention’.

‘By extending the HPV vaccine to boys, the NHS is taking an important step forward in our fight to prevent cancer,’ said the NHS’s national cancer director, Cally Palmer.

‘More people will be better protected, and the vaccine could help to eliminate cervical cancer in this country.’

It aimed to check the real-world effectiveness of the jabs, which may not always turn out to be as effective as they were in laboratory tests.

This was when the researchers took into account how well the vaccine in worked in people who received it, and the proportion of people who did receive it.

Professor Sasieni wrote in his paper: ‘These data show that the impact of HPV vaccination on HPV type 16 and HPV type 18 infections in girls has been substantial.

‘After adjusting for vaccine coverage, vaccine efficacy is both homogeneous across populations and remarkably high.’

HPV – human papillomaviruses – are extremely common and nearly always harmless, but have been proven to cause certain types of cancer in some people.

Cancers in both male and female genitals and reproductive systems, as well as of the rectum and the mouth and throat, may all be linked to the viruses.

The effectiveness of the vaccine, as well as highly sensitive smear tests which there are plans to introduce in the UK, are expected to drastically reduce cervical cancer rates.

A report published in February last year predicted that the cancer cases would be cut in half by 2050 and eradicated completely by 2100.

Robert Music, chief executive of Jo’s Cervical Cancer Trust, said at the time: ‘To have a cancer that can be eliminated is truly exciting.

‘The HPV vaccine and cervical screening programmes provide fantastic weapons against this awful disease and on the horizon are further advancements such as more effective vaccines, potential for epigenetic testing and HPV self-sampling which will get us even closer to elimination.’

Professor Sasieni’s letter was published in medical journal The Lancet.