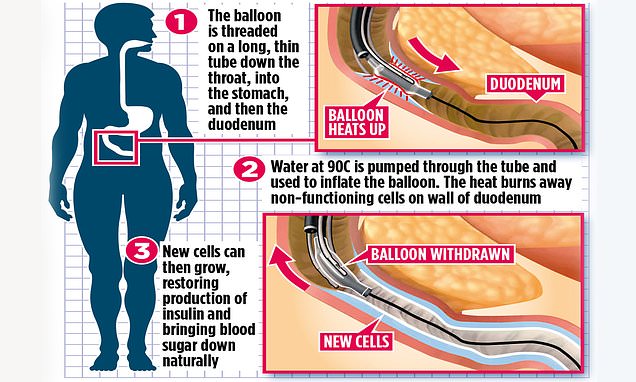 A procedure that involves inflating a hot balloon inside the gut could reverse type 2 diabetes and free thousands of patients from daily insulin injections, say doctors.

The pioneering operation is set to be offered to a handful of British patients as part of an international trial, after promising early results which saw three-quarters of those who underwent it ditch the drug.

The technique, known as duodenal mucosal resurfacing, involves the balloon being threaded on a long, thin tube down the throat, into the stomach, and then the duodenum, the first part of the small intestine. 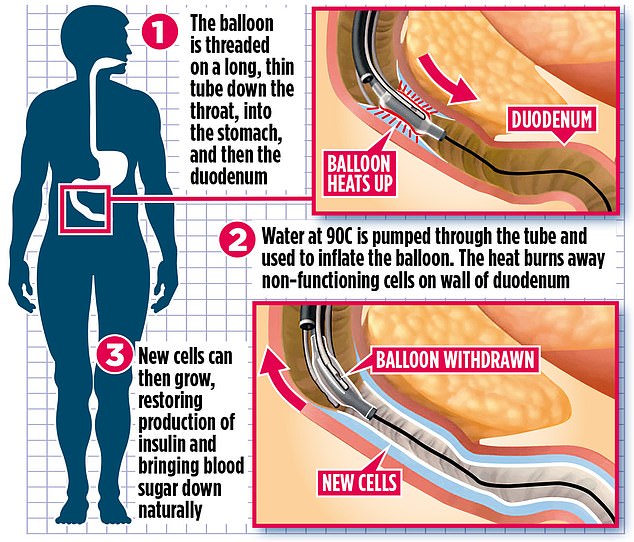 The pioneering operation is set to be offered to a handful of British patients as part of an international trial, after promising early results which saw three-quarters of those who underwent it ditch the drug 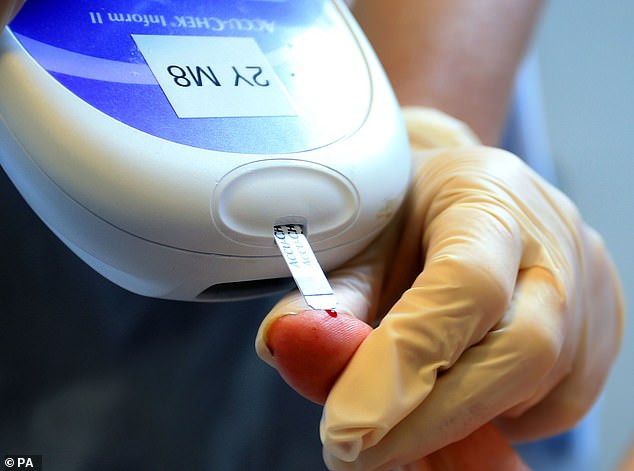 Cells that line the duodenum are key to controlling blood sugar levels. They detect when sugars are consumed, and ready the body to produce hormones, including insulin, which help cells absorb it.

But in type 2 diabetics, the walls of the duodenum become thickened as a result of poor diet. It no longer signals the release of insulin, meaning that sugar isn’t absorbed and builds up in the blood, causing widespread damage over time.

Medication keeps blood sugar levels in check. Some take tablets that help the body excrete sugar, but one in five have more severe problems and injections of insulin too.

The duodenal mucosal resurfacing operation is for these people.

The heated balloon burns away the thickened, non-functioning cells in the duodenum, meaning new healthy cells can grow – experts describe the effects as ‘rejuvenating’ the gut wall. While this doesn’t cure diabetes, it does mean more insulin is produced by the body, helping to bring blood sugar down.

One of the first patients to benefit is Cor Tuinenburg, a 57-year-old electrical engineer from a town near Amsterdam. He took part in an early duodenal mucosal resurfacing trial, in 2018, having lived with type 2 diabetes for 20 years.

‘I was started on insulin in 2012, as my other medication wasn’t controlling my blood sugar levels any more, but it made me gain weight,’ he said. Desperate to find a fix, Cor’s wife read about the duodenal mucosal resurfacing trial and managed to get Cor enrolled. He had the procedure in December 2018. ‘Since then, I’ve been able to come off insulin and now have healthy blood sugar levels. I feel like new.’

Diabetes expert Dr Alex Miras at Imperial College Healthcare NHS Trust, London, said: ‘Given the opportunity, I think most patients would want to be able to stop taking insulin. Not only is there the need for daily injections, but weight gain is a common side effect, and there’s also the risk of blood sugar dropping too low causing “hypos” [hypoglycaemia – a dangerous condition which, without treatment can ultimately lead to loss of consciousness or be fatal].’

The procedure lasts about an hour and is carried out by a gastrointestinal specialist.

While the patient is sedated, a fine flexible tube and camera are passed via the mouth and stomach into the duodenum. Then water heated to 90C is pumped through the tube to inflate the balloon – about the size of a cocktail sausage. This is moved through the 10in tract, burning away the damaged cells.

‘Scans of the duodenum taken a couple of days after the operation show the thickened lining has disappeared, and after three months, regrowth of healthy cells can be seen,’ says Dr Miras.

The effects last up to two years post-procedure – and it is expected that patients will lose an average of up to a stone from stopping insulin.

Fractyl, the company that makes the duodenal mucosal resurfacing technology, is currently recruiting patients for the forthcoming trial.

There are plans to treat up to 430 type 2 patients aged 21 to 70 in trials conducted across 35 sites in the UK, Europe and the US.

‘I’d recommend it to anyone,’ said Mr Tuinenburg. ‘Since the op, I’ve got a dog, and I walk her every day. I built a porch on our new house, have landscaped a garden and get active with our four grandchildren.

‘Three years ago, I doubted I’d ever get back to this.’