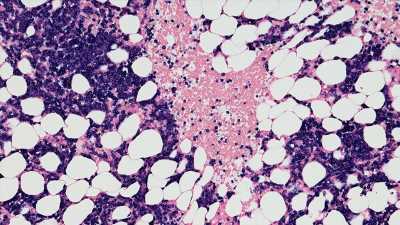 NEW ORLEANS — A novel, off-the-shelf antibody, talquetamab, has shown high response rates among patients with heavily pretreated multiple myeloma in both phase 1 and now phase 2 studies, which have been submitted for approval.

“Talquetamab is a novel agent directed against a new antigen target in myeloma,” explained lead investigator Ajai Chari, MD, from the Mount Sinai School of Medicine in New York City.

The product has demonstrated “a response rate of 73% to 74% with both weekly and every 2-week schedules in a heavily treated patient population. Even in those patients with prior T-cell redirection we see a 63% response rate,” Chari reported the data here at the American Society of Hematology (ASH) annual meeting.

It is encouraging to see high response rates among patients with disease that is refractory to multiple prior lines of therapy, and the results suggest that talquetamab may buy time for patients with few other options, commented Stephanie Lee, MD, MPH, from the Fred Hutchinson Cancer Center in Seattle, Washington, and a former ASH president.

“It looks like there are responses even in people who are heavily pretreated, and have had other agents similar to it, ” she said. “We hear about ‘penta-refractory’ [disease] and everything, and I think we’re going to start hearing about ‘octo-refractory’ and ‘deci-refractory’ and those things. It’s really exciting [to see these responses],” she said. Lee moderated a media briefing prior where Chari discussed the data prior to his presentation.

Talquetamab is a bispecific antibody directed against a novel target with the prosaic name of “G protein–coupled receptor, family C, group 5, member D” or simply GPRC5D. The antigen is a so-called “orphan” receptor with an unidentified ligand. The receptor is expressed in malignant plasma cells, making it a particularly attractive target for the treatment of patients with multiple myeloma.

“It’s important to pick the right target for these [patients] and GPRC5D is a good candidate for that because it’s highly expressed on myeloma cells but spares normal tissues, in particular the hematopoietic stem cells for the precursors to their blood,” Chari said.

The new drug could be available next year. The manufacturer, Janssen, announced on last week that it had submitted an approval application with the Food and Drug Administration for talquetamab use in the treatment of patients with relapsed or refractory multiple myeloma.

The clinical results so far “indicate the potential of this treatment for heavily pretreated patients who have exhausted currently approved therapies,” Chari said in a statement.

Chari and colleagues recently reported results of the phase I MonumenTAL-1 study in The New England Journal of Medicine. Here at ASH 2022, they reported phase 2 results from the same study, including some patients carried over from phase 1, but also a subgroup of patients with prior exposure to either chimeric antigen receptor T-cell (CAR-T) therapy or other bispecific T cell-engaging antibodies.

In the phase I dose-escalation study published in NEJM,  the response rates among patients who had a median of six prior lines of therapy ranged from 64%­­-70%. The drug was delivered in this phase at a variety of dose levels and schedules, and both intravenously and subcutaneously.

The phase 2 study enrolled patients who had a minimum of three prior lines of therapy including a proteasome inhibitor, immunomodulating agent, and anti-CD38 antibody, and who had good-to-fair performance status.

There were 3 cohorts. The first cohort included 21 patients from phase 1 and 122 from phase 2 who received talquetamab at a dose of 0.4 mg/kg subcutaneously once weekly. These patients were allowed to have received prior therapy with an antibody-drug conjugate (ADC) targeted against B-cell maturation antigen (BCMA), but could not have received a prior T-cell redirection therapy.

The second cohort included 36 patients in phase 1 and 109 in phase 2 who were treated with 0.8 mg/kg subcutaneously every 2 weeks. These patients had the same prior therapy allowances and restrictions as the first cohort.

The third cohort included 17 patients in phase 1 plus 34 in phase 2 who had received either CAR T-cell receptor therapy or a different bispecific T-cell engager. These patients received either 0.4 mg/kg weekly subcutaneous talquetamab, or 0.8 mg/kg every 2 weeks.

The response rates were consistent across subgroups, including baseline International Staging System (ISS) stage III disease, baseline cytogenetic risk, number of prior therapies, degree of refractoriness to prior therapy, and prior exposure to the anti-BCMA antibody belantamab (except patients with baseline plasmacytomas).

Most adverse events of grade 3 or 4 were cytopenias, including anemia, neutropenia, lymphopenia, and thrombocytopenia. These adverse events were generally limited to the first three cycles, and less than a third of all cytopenias were grade 3 or greater.

Taste alterations (dysgeusia) occurred in nearly half of patients in each dosing group. Dysgeusia was managed with supportive care, including hydration, and in some cases  with dose reductions.

Immune effector cell-associated neurotoxicity syndrome (ICANS) was observed in 10% to 11% of patients, but most of these events were grade 1 or 2.

At the briefing, Medscape Medical News asked Chari whether, given the evident efficacy and relative safety of this agent, it could be moved up higher in the therapeutic lines and combined with other agents such as proteasome inhibitors (bortezomib et al), immunomodulators (lenalidomide and others) and CD38-directed antibodies (daratumumab, etc.)

Chari replied that several studies combining talquetamab with agents in all of these classes and with other bispecific T-cell engagers are currently underway.

The study was supported by Janssen. Chari disclosed consulting fees from the company. Lee has received clinical trial research funding from Amgen, AstraZeneca, Incyte, Kadmon, Novartis, Pfizer, Syndax, and Takeda and has served as a consultant to Incyte.

Neil Osterweil, an award-winning medical journalist, is a long-standing and frequent contributor to Medscape.