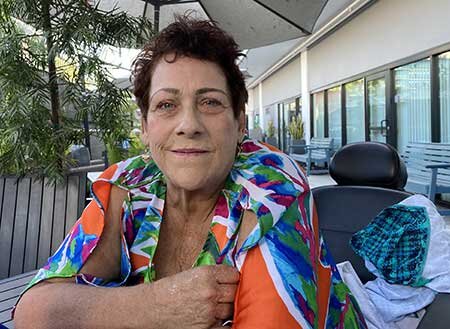 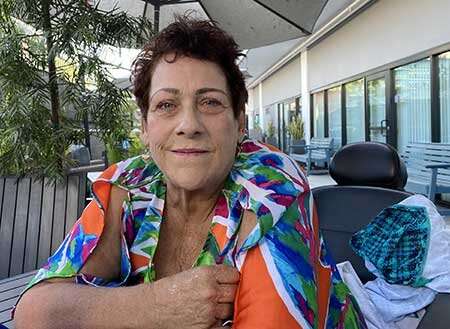 HIV is not what defines Candis Givens. In fact, very few people, including those close to her, know she has the virus.

The effectiveness of new HIV treatments makes this possible for the San Diego resident. Unfortunately, so does the fact that very few people are close to her.

Both of her brothers are dead, one by suicide last year. She is twice-divorced, and her only child no longer speaks to her—she suspects because his wife doesn’t like her—which means she does not get to watch her 10-year-old grandson grow up.

“This is not how I thought being 71 would be,” Givens said, tears welling as she sat in a patio outside her senior living apartment complex.

Givens’ best friend knows about her HIV status, but that’s only because her best friend is Rolando, the caregiver newly assigned to her by San Diego County.

A new clinical trial designed by Dr. Maile Young Karris, a board-certified internal medicine physician and infectious disease specialist at UC San Diego Health, seeks to discover whether Givens, and others living with HIV, can benefit from emotional support offered by a virtual community, and from physical support and services delivered by community volunteers.

Called “2nd AC+: New Village Model,” it will connect participants within a secure online community, providing the means for arranging lifts to the grocery store, tech support for a computer or a friendly face to talk to on a screen. Delayed by COVID-19, the three-year trial is currently recruiting participants.

“It’s about changing the culture back to how it used to be,” Karris said, “where neighbors actually knew each other and helped each other and you didn’t have to worry so much about your poor dad who lives by himself, far away from you, because you knew that his neighbors would call you if anything happened or would make sure that he was eating.”

Though 2nd AC+ will primarily operate in a virtual setting, all participants must reside within reasonable driving distance of each other. Karris chose Central San Diego for its diversity, its history in dealing with the HIV/AIDS crisis and its proximity to the San Diego LGBT Community Center, which is partnering with Karris to administer the study because of its extensive resource knowledge, commitment and existing senior program.

Funding for the trial comes from a $750,000 grant from Gilead Sciences, with volunteer help to be provided by community members.

“I’m willing to help all I can, whatever Dr. Karris needs me to do,” Givens said, explaining that she is not confined to her wheelchair, but uses it because “it makes it easier to get around.”

According to a study of 356 patients with HIV published in the journal AIDS and Behavior in November 2017, 58 percent reported symptoms of loneliness, which has been associated with functional decline and increased mortality risk. According to the paper, previous studies among HIV-negative people aged 65 and older have found rates of loneliness around 40 percent.

Karris first became aware of the problem of loneliness among seniors with HIV in 2018, when she noticed a growing number of her patients asking to see her monthly. This puzzled her because medical advances meant patients who responded well to HIV treatment did not need to be seen more than twice a year.

“A lot of these patients were pretty adamant and I couldn’t really understand why,” she said.

Then one patient offered a revelation: It was loneliness they struggled with, not illness.

“He told me that when he sits at home alone, he feels like he’s just waiting to die,” Karris said. “And when he comes to clinic, he said he feels like there’s someone who actually cares that he is alive.”

Persons with HIV in their 50’s and 60’s are less likely to have a partner to share their life with, or even a lifelong friend to call, than persons without HIV, according to Karris, because having contracted the virus in the 1980s and 1990s means many of their earlier friends or family members may have already passed away.

“I’ve lost count of how many funerals I’ve attended,” said Rory Baker, another patient of Karris’ who signed up for the village. “I remember talking to my mom and asking, “Do you realize that I’ve gone to more funerals than you have?'”

2nd AC+ is patterned after the Village Model, a grassroots movement started in 2002 by Boston seniors who realized that if they wanted to stay in their homes, they needed a plan so their children wouldn’t remove them when they got too old to care for themselves. (A 2019 survey by AARP found that three out of four adults want to stay in their homes and communities as they age.)

Their plan was to pool their money to hire an administrator to meet their needs using the volunteer labor of other community members, and to organize social events. It’s an idea that’s catching on, with more than 200 similar villages now in place housing more than 25,000 residents. However, the village approach has yet to be properly studied, said Karris.

“Researchers haven’t been enmeshed from the beginning of these villages,” Karris said, noting that the only research conducted so far has been in the form of surveys. 2nd AC+ will use longitudinal questionnaires and qualitative interviews to assess the village’s impact on social networks, loneliness and quality of life.

2nd AC+ will also provide some personal closure for Karris. While growing up in Hawaii, one of her relatives would visit her family frequently from New York. Suddenly, Uncle Glen’s visits stopped.

“I didn’t know what happened and we, as a family, never talked about him,” she said. “It wasn’t until I was in college that my mom told me that he died in the ’80s of AIDS.”

Karris’ lack of closure with her uncle directly motivates her work with HIV patients.

“That was so opposite of how I was raised, which was according to the Hawaiian concept of family, ohana, that I really struggled with that disconnect,” she said, “and a lot of my approach to patient care stems from not being able to be ohana to my uncle during his time of greatest need.”

Though 2nd AC+ will focus primarily on people living with HIV, Karris said it will also welcome anyone who feels unsafe or lonely living on their own, or who desires to give back or be generous to their community.

Similar villages cost participants between $500 and a few thousand dollars per year. Karris’ study is free. Yet she said she is having difficulty filling all 150 slots.

“We live in a culture where it is praised to be independent and you don’t ask for help,” she said. “I think that is actually harming some of our older adults because we’re meant to connect with one another.”

Once the study concludes, Karris said she hopes the village will keep going. But regardless of what happens, if the study yields useful data, that will make it more feasible for other groups to replicate the program.

“At the end of the day, that to me is the most important thing,” she said.