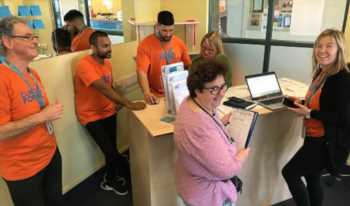 A patient’s primary care record, pulled from GP systems, is available via the portal and has been accessed more than 7400 times since go-live.

More than 800 messages have also been sent to GPs using the new ‘note to GP’ functionality.

A Hawke’s Bay DHB clinical super-user group had been testing and using the portal for 10 months before the official go-live.

The DHB’s executive director digital enablement Anne Speden said strong clinical engagement has been key to the smooth roll out of the portal.

“This is the beginning for us. We have got the platform in and now we can build on that with clinical leadership,” she said.

MidCentral and Whanganui DHBs are already live with the regional portal, meaning clinicians at any of these sites can view information about their patients generated from both within their DHB and the rest of the region.

Hawke’s Bay DHB physician John Gommans said both patients and staff tend to move between the central region DHBs frequently, so sharing information about them is hugely beneficial to clinical care and to reducing duplication of work, such as tests.

The DHB was previously using a customised version of its patient administration system with add-ons built to help pull together information for clinicians.
Both systems continue to run in parallel. However, as things become available in clinical portal, they are being switched off on the old system.

Gommans said, “the clinical portal became the number one way to access information,” when access to historical results and clinical notes went live and it became the only way to create discharge summaries and sign-off results.

The partnership approach taken by the information services team to work with clinicians has been fundamental to the successful uptake of the portal, he explained.
In just a few months there have been more than 3500 unique logins.

A Regional Clinical Working Group of senior medical officers from the six central region DHBs meets regularly to make decisions about the next enhancements for the portal.

Speden said Hawke’s Bay is also working with other regions using Clinical Portal 8 and is looking to replicate some of their “quick wins”.

She said the regions of New Zealand are all facing similar issues and challenges and can share experiences both regionally and nationally, to benefit the wider health sector.

This article first appeared on eHealthNews.nz.