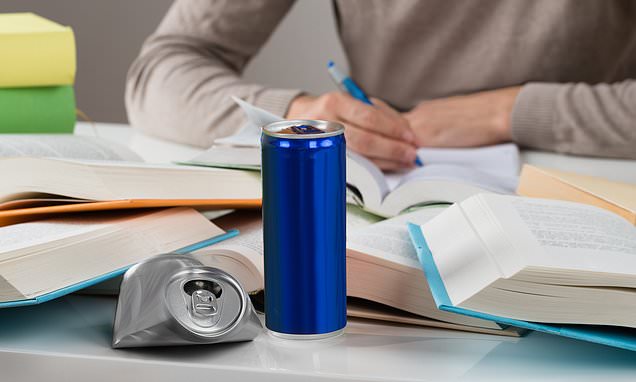 Guzzling two large energy drinks within an hour is dangerous for the heart, scientists have warned.

However, scientists have warned caffeine is not blame – and other ingredients used in the flavoured drinks is the problem. 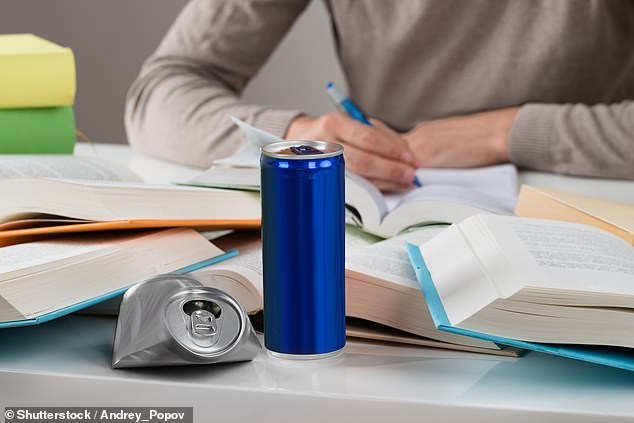 Researchers at the University of the Pacific asked 34 volunteers to consume one of two ‘commercially available’ caffeinated energy drinks or a placebo.

All of the drinks were consumed within a 60-minute period and the experiment was repeated on three different days.

The placebo drink contained carbonated water, lime juice and cherry flavoring. All of the drinks were placed in identical containers.

Both energy beverages tested, which were not named by the scientists, contained 304 to 320 milligrams of caffeine per 32 fluid ounces.

Caffeine at doses under 400mg is not expected to induce any electrocardiographic changes, the study authors claimed.

Researchers measured the electrical activity of the volunteers’ hearts by electrocardiogram, which records the way a heart is beating.

They also recorded participant’s blood pressure. All measurements were taken at the study’s start and every 30 minutes for four hours after consumption.

Results showed volunteers who downed the energy drinks had a blood pressure spike of 5mmHg, on average, compared to those given the placebo.

They also had a QT interval – the time it takes ventricles in the heart to generate a beat again – that was up to 7.7milliseconds longer.

A ‘normal’ QT interval is considered to be between 350 and 440 milliseconds, meaning the energy drinks increase the delay by around two per cent.

Doctors warn if the QT interval is too short or long, it can cause the heart to beat abnormally, which can cause a life-threatening arrhythmia.

Professor Sachin Shah, study author, said the risk ‘could not be attributed to caffeine’ as he called for urgent trials to investigate what ingredient is to blame.

This is despite caffeine being known to cause vessels to contract and release adrenaline, a hormone that can temporarily increase blood pressure.

Other common ingredients in the energy drinks analysed in this study included taurine, glucuronolactone and B-vitamins.

Professor Shah added: ‘The public should be aware of the impact of energy drinks on their body especially if they have other underlying health conditions.’

He warned energy drinks may be especially dangerous to patients with long QT syndrome – where the muscle takes longer than it should to recharge between beats.

And Professor Shah said adults battling hypertension – high blood pressure – should also cut down on their intake to avoid spikes that can prove deadly.

She said: ‘Energy drinks are readily accessible and commonly consumed by a large number of teens and young adults.’

The findings, published in the Journal of the American Heart Association, are not the first to prove energy drinks can be dangerous.

Energy drink consumption has been associated with cardiac arrest and heart attacks, the team of academics wrote in the journal.

Researchers from the University of Texas at Houston last year said the drinks narrow blood vessels, which restricts blood flow to vital organs.

Campaigners, such as Action on Sugar have called for a complete ban on the products for under 16s.

But Government advisers said in December that there is not enough scientific evidence to justify such an extreme measure.

ENERGY DRINKS – ARE THEY SAFE?

There has been a stark rise in Britons’ thirst for caffeinated drinks – at least 600 million litres are drunk every year, 200 million more than ten years ago.

Some 55 per cent of those aged between 12 and 24 years old suffer everything from vomiting and chest pains to even seizures from the drinks, despite most consuming less than the recommended one-to-two beverages a day, a Canadian study found last January.

As well as the drinks’ alarmingly high caffeine levels, the researchers believe consuming them with alcohol or during exercise makes them even more dangerous.

Previous research has linked energy drinks, such as Red Bull, to obesity, heart abnormalities and even sudden death due to their high-sugar and caffeine content.

Most energy-drink consumers are unaware of the products’ main ingredients, health implications or appropriate serving sizes, experts have said.

How much caffeine do they contain?

A 250ml serving of a typical energy drink – half the standard bottle or can size – contains 80mg of caffeine per litre – twice as much as a regular cola drink, but the same as a 60ml espresso.

Experts have warned that caffeine-packed energy drinks could be fuelling a record rise in diagnoses of irregular heartbeats, one of Britain’s biggest killers.

Just one energy drink daily could trigger arrhythmia, an abnormal heart rhythm which increases the risk of stroke five-fold.

It is thought that this is because excessive caffeine consumption dramatically increases the amount of calcium released within the heart’s cells, disrupting the electrical rhythm.

Experts also warn the addition of high quantities of sugar in energy drinks could be a reason for their potency.

How much sugar do they contain?

Campaigns, such as Action on Sugar have called for a complete ban on the products for under 16s.

Their study in December 2017 found the average sugar content was more than an adult’s entire maximum daily recommendation for sugar intake in the UK.

Likewise, 78 per cent of products exceeded the maximum daily recommendation for sugar intake for a child aged seven to ten 10 years – 24 g or six teaspoons.

Certain manufacturers reformulated before the Soft Drinks Industry Levy in April 2018 in the UK.

Before reformulation in 2017, the Punched Energy and Tropical Guava Flavour products from Rockstar, contained a staggering 78g, or 20 teaspoons, of sugar per 500ml serving – more than three times the daily recommendation of 25g for women and 38g for men.

Now, these drinks contain 24g of sugar per 500ml, the equivalent of six teaspoons per 500ml.